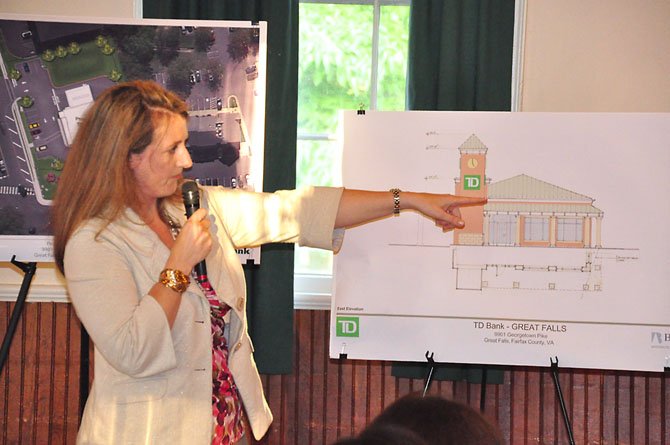 Great Falls — Representatives for TD Bank presented the latest on the proposed Great Falls branch, which would be located at the site of the former Exxon station at the corner of Georgetown Pike and Walker Road. This was the sixth such meeting hosted by the Great Falls Citizens Association.

The bank, as currently planned, will be 2,552 square feet, with an exterior of brick. There will be a 39-foot tower in one corner with a clock and the TD Bank logo, as well as a two-lane drive through on the south side.

Mike O’Hara, site engineer for the proposed TD Bank in Great Falls, answers questions about the proposal Tuesday, June 11 at the Grange.

According to a traffic study done as part of the program, there will be an average of 279 daily trips made, which is a decrease from the 1,069 trips that were made when it was a gas station.

Lori Murphy, an attorney representing TD Bank, said that there will be a sidewalk added to the property on the Georgetown Pike side, which could necessitate the removal of the tree on the property, currently located in VDOT’s right-of-way.

"One of the major county comments we received during the process was about the tree. We know that Great Falls loves their trees, and we didn’t want to propose anything to destroy it," she said. "But the county said to us that at some point the tree would need to be removed because of age, and asked us for an alternative, which would be for us to remove the tree, and plant vegetation and have a straight sidewalk."

Murphy said there will be further meetings to discuss the landscaping on the site.

Mike O’Hara, site engineer, said that the county has also requested a 3 1/2-foot-high board on board fence to be placed at the south side of the lot, to shield the builder next door from the lights of cars going through the drive through.

TD Bank made their final submission to the Fairfax County Planning Commission at the end of last week, and it will be heard at their July 18 meeting.