Fairfax teen is in remission from leukemia. 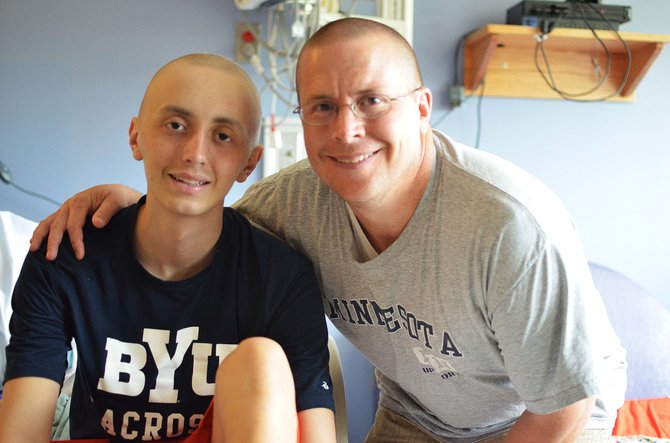 (From left) are Spencer Goold and dad Glen during Spencer’s treatment. His dad and a dozen friends shaved their heads in solidarity with Spencer when he lost his hair to chemo. Photo Contributed

This Saturday, March 16, Glen Goold is running in the Rock ‘n’ Roll USA Marathon in Washington, D.C., to raise money for the Leukemia & Lymphoma Society. And fueling his every footstep will be the knowledge that his son Spencer is now in remission from this disease.

Spencer has caught up with his studies and is once again playing lacrosse, which he loves and at which he excels. And looking back at the past 18 months, this Fairfax teen has come a long way.

“In fall 2011, he was on a travel lacrosse team and was concerned with the usual things boys his age are—school and who he was going to ask to Homecoming,” said his dad. “Then he started throwing up immediately after any physical exertion.”

So the Goolds took their son to the doctor and, at first, it was thought he had allergies. But on Jan. 10, 2012, at age 16, Spencer was diagnosed with acute myeloid leukemia (AML) and given a 50-50 chance of surviving.

“Spencer’s the oldest of five children, and it was shocking—out of the blue—that this was happening to our formerly healthy son,” said Goold. “We asked, ‘Why us? Why now? Why him?’ Then we buckled down and tried to be as optimistic as we could. We also learned as much about AML as possible to fight the battle as best we could.”

SPENCER WAS TREATED by Children’s National Medical Center practitioners at Inova Fairfax Hospital, and Goold said they were fortunate to have wonderful doctors. Right after his diagnosis, Spencer was hospitalized until May 31, 2012, except for a few days between each of his four rounds of chemotherapy.

His type of leukemia had to be treated in the hospital because it was so aggressive. It was also critical to prevent him from getting any infections while his immune system was compromised.

“The hardest thing for Spencer was being cooped up in his hospital room,” said Goold. “But he was determined and a trooper through the whole thing. He had a good attitude, tried to stay positive and handled it all with grace. We couldn’t have been prouder of him.”

Family and friends rallied around Spencer. And when he lost his hair to chemo, his dad and a dozen friends shaved their heads in solidarity with him. Spencer also did his schoolwork so he could graduate this year with his class. He plans to attend college and, after what he’s been through, he hopes to someday become a doctor. 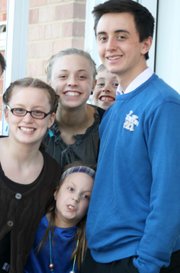 “We’ve been fortunate that some good has come out of it,” said Goold. “It changes your perspective on life. Little things that bothered you don’t mean as much. And you learn to appreciate life for what it is and the blessings around us all the time.”

GRATEFUL that his son has now been in remission for nine months, Goold—who’d previously done endurance training—is now actively raising money for the Leukemia & Lymphoma Society. That’s why he’s gearing up to run Saturday’s marathon in Spencer’s honor.

“I got into it to raise awareness and funds for a cause I wholeheartedly believe in,” said Goold. “I also want to provide hope for other people going through this.”