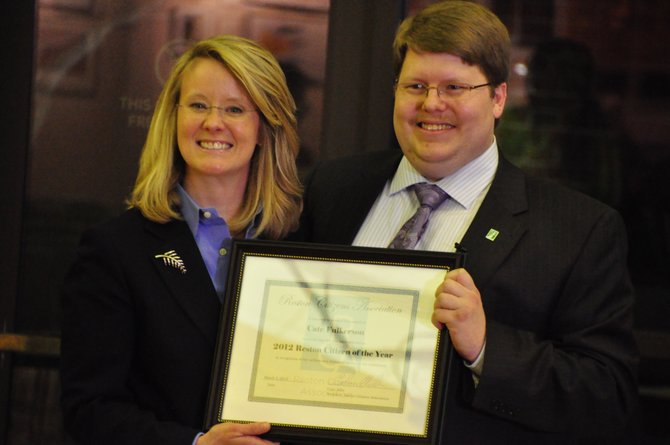 The Reston Citizens Association named their Citizen of the Year Thursday, March 7, at the Reston Community Center. Cate Fulkerson, Reston Association’s director of administration and member services, is this year’s recipient. 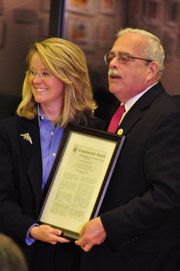 “Anyone who has ever called the RA with a problem can probably attest to the benefits she has provided. She’s also helped develop a generation of community and nonprofit leaders through Leadership Fairfax,” said Colin Mills, president of the RCA. “One thing that unites all Restonians, regardless of background or how long you’ve lived here, or your political persuasion or stance on various community issues, is that everybody loves Cate. She’s so deserving of all the praise that’s heaped on her. She’s professional, efficient, smart friendly, compassionate, responsive to people’s needs and she’s very dedicated. In short, she’s exactly the person you need to find when you need something done.”

Fulkerson has served as past board president for Leadership Fairfax, and helps with the annual South Lakes Ethics Day and the local Character Counts program. She is also actively involved with planning the community’s annual Martin Luther King Jr. celebrations and has served on the Greater Reston Chamber of Commerce’s public policy committee.

“One thing that unites all Restonians, regardless of background or how long you’ve lived here, or your political persuasion or stance on various community issues, is that everybody loves Cate.”

—Colin Mills, president of the RCA

“Cate has been invaluable to me during my time at RA,” said RA CEO Milton Matthews. “What immediately comes to mind is our new headquarters space. When we finally found a possible space for relocation, I sat down and told her I wanted her to take the lead … and she got it done on budget and on time.”

Fulkerson was nominated for the award by Jerry Volloy, former RA CEO and current president of the Alliance of Reston Clusters and Homeowners.

“Cate has built an environment where the attitude and responsiveness of RA’s administrative employees results in members completing their transaction with the association with a positive sense that they are the reason for the association’s existence, rather than feeling that the employees were doing them a favor by serving them,” he said. “Cate understands who she serves and protects in this community. In her position at RA, she demands her people show you the same respect, the same responsibility, caring and citizenship that characterizes her.”

Per the RCA’s nominating procedure, Volloy submitted a nomination form that outlines the extent of Fulkerson’s contributions to the community.

Ken Knueven, president of the RA board, called the nomination just “an excerpt of what Cate has accomplished.”

Fulkerson, who has been with RA since 1991, said she was “humbled and honored” to receive the award.