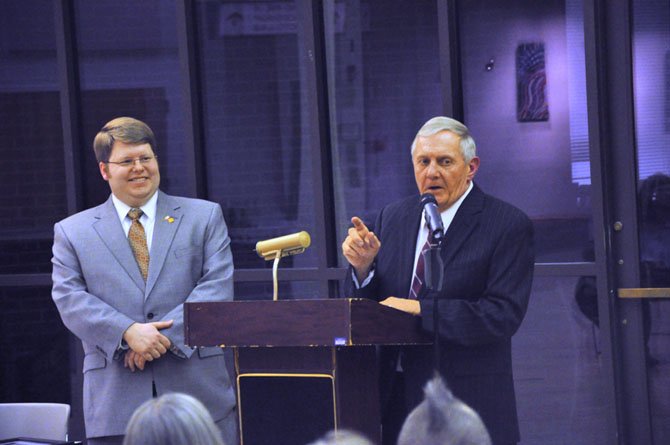 From right Nick Brown, a Restonian since 1975, was awarded the Reston Citizens Association Citizen of the Year by RCA President Colin Mills. Brown has volunteered for almost four decades for dozens of organizations in the area. Photo by Alex McVeigh.

Reston — When he moved to Reston in 1975, Nick Brown wasted no time getting involved with his community. Thirty-seven years later, he was named the Reston Citizen Association’s Citizen of the Year during a ceremony at the Reston Community Center Monday, Feb. 20.

Brown has volunteered with Reston Interfaith since 1975, working with low income seniors and helping collect furniture for those in need. Over the decades, he has also devoted time to countless other causes, including planning the Embry Rucker Community Shelter, founding the South Lakes Band Boosters Association, volunteering with the All Dulles Area Muslim Society, the Jewish congregation Shoreshim, St. Anne’s Episcopal Church, the Reston Swim Teams and more.

Mandy Guernsey of Reston Interfaith officially nominated Brown for the award. She cited his behind-the-scenes work with Reston Interfaith and his hands-on approach to solving many problems facing the needy in Reston.

"He really brought to light the paucity of furniture in certain Restonian’s homes. He made it a point that whenever he knew someone was moving, or changing houses or getting rid of furniture to ask them what was happening with that old furniture," she said. "Instead of just connecting with someone else, Nick was that connection. He put it in his truck and hauled it all around town."

BROWN IS KNOWN for being humble in his volunteer work, often shunning any recognition for his efforts. He called being able to volunteer for youth one of the "great pleasures of my life," saying it was a joy to help them discover the difference they can make in the lives of others.

One of Brown’s signature efforts is helping low-income seniors in the area.

"I’ve had the opportunity to help a number of these individuals in Reston. When one comes into a house, often times you find a widower or a widow, couple times I’ve found a husband and wife in their late 80s, and they seem so depressed," he said. "Nobody seems to talk to them anymore and they’re downtrodden. I take their hands, and I look into their eyes and say ‘It’s OK, it’s OK, you are not alone.’ It’s those moments that you can see the weight come off their shoulders and the peace of God descends around you."

He credited his wife Peg for keeping him from "going over the top" and for teaching him a very important lesson when it came to volunteering.

"A lot of times when you help people, they’re so grateful when you help them they come up to you and shake your hand and thank you, and I’d say ‘you’re welcome, but it’s nothing,’" he said. "Peg would grab me by the lapels and say ‘when you say it’s nothing, you belittle the problems they have, saying it’s nothing.’ So she made me learn to say this, word for word: ‘You’re welcome. I’m glad I could be of help.’ And that makes all the difference in the world."

The RCA’s Citizen of the Year Award was created in 1976 to honor citizens whose service furthers Reston’s goals as a community.

THE AWARD WINNER is chosen by a three-person committee, which included Colin Mills, the RCA president.

"He has been giving back to the community during his 35-plus years as a Restonian. Despite the time commitments of his day job as an environmental scientist, the challenges of raising a family, Nick finds time to serve the community year in and year out," he said. "The committee was also struck by the sheer scope of Nick’s volunteer work."

Mills even has personal experience witnessing Brown’s efforts in the community, having been a Cub Scout under Brown’s leadership.

"When we selected Nick as Citizen of the Year, I mentioned this to my mom -- I’m a lifelong Restonian and my parents still live here -- and she said ‘Is that the same Nick Brown who was the cub master when you were in Cub Scouts?’" he said. "I looked at the nomination form, and sure enough it was. I was helped by Nick’s volunteer work, and I didn’t even know it until a few weeks ago."

Brown’s name will now adorn a plaque at the Reston Community Center, which includes all past winners.