Historic Home for Sale in Alexandria

Designer/owner brought the home up to date while preserving its architectural integrity. 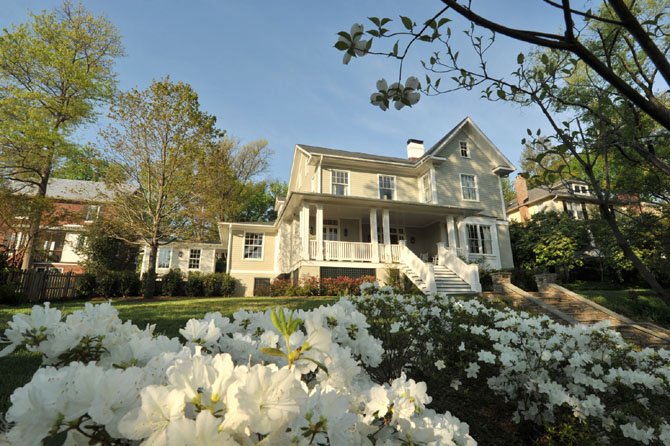 This 7,590 square-foot, six-bedroom, eight-and-a-half bathroom home near Old Town Alexandria, is on the market for $2,995,000. Photo courtesy of ©Brad Pettengill Photography

Decades before Alexandria-based interior designer Sydnye Pettengill and her family moved into a stately Victorian home near Old Town, it was well established as a spacious retreat. “The former owners were a family of seven who had lived there for 45 years,” she said.

When Pettengill purchased the property, which was built in 1917, little had changed. The home, which connects to King Street, was in disrepair. However, Pettengill, who started her own business in 1987 after studying in London and a stint with prominent interior design firm Milo Hoots Associates, Inc., saw a diamond in the rough. “I thought it had incredible potential,” she said. “I found the high ceilings particularly appealing.”

Pettengill’s husband Bill Wiley, a systems engineer and director of the Science Engineering Research Center at the Potomac School in McLean, said, “We bought it knowing that it was going to be a full renovation. We didn’t know what the final blueprint was going to be, but it was so large that we knew we could do whatever we wanted to.”

The 7,590-square-foot, six-bedroom, eight-and-a-half bathroom home also included a two-story carriage house, and although she needed to expand and update the home, Pettengill worked to preserve the historic home’s architectural integrity. “We remodeled and gutted, but we wanted to keep the character of what it was,” she said. “We were careful about integrating the spaces that we added.”

“We wanted to keep the character of what it was. We were careful about integrating the spaces that we added.”

ONE OF THE KEYS to maintaining the original design was salvaging and reusing materials as much as possible. “We kept the original front doors, original French doors going into dining room, as well as the original windows on the first floor in front of the house,” said Pettengill.

“The hardwood floors in the master bedroom are original,” she continued. “There is a sitting room off the master bedroom. It is quite a suite. The pine floors on the second and third levels were also saved from the original home and reused.”

A striking Belvedere window in the kitchen creates an ideal marriage of style and function by filling the room with natural light. “The kitchen is the heart of the house,” said Pettengill. “There is a side terrace and you can go in and out of the kitchen through two door ways.”

The kitchen, which opens into the home’s great room, has pale yellow painted cabinets and contrasting dark, honed Uba Tuba granite counters. “One of the eureka moments for us was the kitchen,” she said. “We struggled with it for a couple of years and then decided to push it out and make it more open.” The flow continues into the dining room, which has a bay window that is original to the home.

“It is spectacular for entertaining,” she said. “There is a terrace off the back of the house that is concealed and very private. There is also a side terrace off the kitchen.” The original service kitchen became the library after Pettengill added built-in bookcases.

Pettengill says that the foyer is the pivotal point of the house. “There is an open stairwell and you can see from the foyer straight up to the third floor.” She even found a carpenter to replicate the original stair railing.

A round table stands in the middle of the foyer, complimenting the shape of the space and the period of the home. “It is a hand painted table that’s reminiscent of the Victorian era when the house was built,” said Pettengill.

FORMER CLIENTS SAID that one of Pettengill’s strengths is her ability to navigate the often-daunting task of creating fresh designs that compliment historic homes. Alexandria resident Grace-Marie Turner hired Pettengill to complete the interior design on her expansive Old Town home. The oldest part of the house was built in the mid-1700s and subsequent additions span the 18th, 19th, 20th and 21st centuries.

“The house had 50 windows that all required different window treatments,” said Turner. “We wanted them to be new and fresh and at the same time respect the period.” The result, she continued, was a balance of elegance and coziness that honored the home’s range of architectural periods.

Pettengill, who has adult children, said it’s time for her family to find a smaller abode and turn her spacious Alexandria property over to another family. “As a friend told me, we’re not down-sizing, we’re right-sizing,” she said.