Warren of walls and small rooms grows into an open Nantucket Shingle-style home. 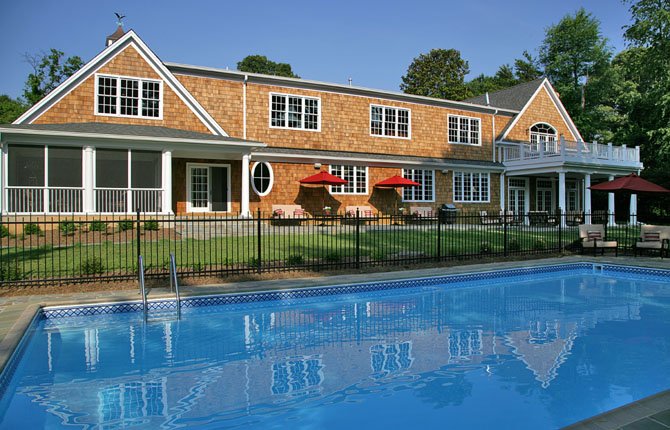 Architect Paul Gaiser’s solution adds living space and connectedness to a setting that includes a pool and tennis court. Shingle-style cladding and fine detailing help to curb the massing effect inherent in a large-scale home.

Potomac — Converting a “split-level” into a form and style that suits a 21st century family has become one of the more compelling challenges in the recent literature of architectural remodeling. When the style was introduced in the 1950s, it was seen as an intelligent way to organize the basic functions of a home. To contemporary sensibilities, however, its inherent “boxiness” seems notably dated, if not anachronistic. Restricted window size, low-ceilings and too many walls are among perceived limitations.

But what to do? That was the question confronting a Potomac couple after purchasing a circa-1980s six-bedroom split level on Persimmon Tree Road.

With its sprawling lot, pool and tennis court, the house had much to offer an energetic family of four that included two small sons. Unfortunately, the house itself failed to take advantage of an extraordinary setting, and the interior just didn’t serve.

Warren of walls and small rooms grows into an open Nantucket Shingle-style home.

For starters, the existing plan concentrated the main bedrooms on the top level of a two-level front-facing gable located on the far left side of the front elevation.

The arrangement offered the requisite needed privacies, but was also space-restricted with limited natural light. A rear sunroom added in an earlier remodel featured an adjunct side-facing greenhouse — though, curiously, this addendum only further reduced visual linkage to the otherwise enviable lot.

Overall, glazing apertures on the entire rear elevation were less-than-generous, a design characteristic that made the primary living suite — which included a dining room, kitchen and breakfast room — too dark.

More importantly, the interior itself was dated and undistinguished. The 8-foot “hung” ceiling in a family room fours steps down from the foyer made the space feel too closed- in. A warren of adjacent lower level rooms (which included a laundry, an office and two small bedrooms) seemed rambling and poorly rationalized.

“It wasn’t simply that the owners wanted more living area and natural light,” said Paul Gaiser, AIA, the architect whom the couple hired to execute a more contemporary vision, “they were also looking for a more sharply articulated interior, and an indoor/outdoor configuration suitable to both family and entertainment requirements.”

So Gaiser’s first order of business was re-thinking the first level footprint and designing an entirely new second level above the main wing.

Overall, the makeover adds 2,320 square feet — 720 to the first level and 1,600 to the second level. More pointedly, the new plan deletes 18 linear feet of rear elevation bearing wall — shifting new second floor loads to discretely integrated structural supports — while adding more than 500 square feet of new living area to the right side of the house

The existing sunroom is, likewise, eliminated — making way for a new footprint that accommodates a significantly enlarged family room, and a sweeping master bedroom suite one floor above.

THE FIRST LEVEL SOLUTION introduces an “open” plan that persistently develops a dramatic indoor/outdoor continuum. Relocating the new foyer into the center of the revised first floor layout, the architect allocated space for two front-facing formal rooms — a dining room and a music room — on either side of a two-level new entrance. Entering the house, visitors are treated to a front-to-back focal point centered on the breakfast table and the wide back yard beyond.

The new rear suite of rooms — kitchen, breakfast room and den — are nicely delineated, yet visually interactive, an arrangement that draws dramatic power from the rolling landscape.

The kitchen/breakfast suite, in turn, segues to the skillfully re-designed family room, which is generously expanded both up and out.

By removing both the original floor and the dropped ceiling, Gaiser converted an oppressively low 8 feet of head room into a commanding 12-foot expanse — coaxing the eye upward with accentuated molding and a triple set of French windows that now open onto an elegantly covered porch.

As a design statement, the new interior is spacious, yet warm — flanked by a winning backyard view, and a floor-to-ceiling flagstone hearth set off by casement windows.

A mid-house interior hallway — bypassing the kitchen suite — enables family and guests to access front rooms without disturbing the peace of rear-house gathering spots. On the other hand, the plan readily supports traffic requirements for a fete of almost any size, providing cozy spots for an out-of the way sit-down that, at one’s discretion, easily re-engage into the mingle.

ALONG THESE LINES, the home’s wholly new second floor increases privacy potentials exponentially, a luxury fully supported by the inclusion of a new back stairway linking the children’s half of the top floor to the kitchen and a back exit to the pool.

The top level of the original two-level block, in turn, now features a rear-facing master bedroom suite that includes a dedicated balcony visually linked to the 18th hold at Congressional Country Club. One can enter a 250-square foot walk-in closet from the bedroom or the master bath, which includes a walk-in shower and a whirlpool bath on a raised marble platform.

Architecturally, Gaiser evoked details often associated with older shingle-style homes found in Nantucket and Long Island. Despite a considerable increase in mass, the new home seems intimate, cozy, traditional. A screened porch on the west side of the redesigned rear elevation functions as an “away room,” Gaiser said — a perfect indoor/outdoor transitional zone and a very popular gathering place weather permitting.