Highlanders beat Westfield for first win of the season. 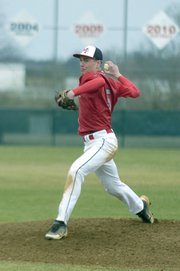 McLean pitcher Joey Sullivan struck out eight in six innings during a victory against Westfield on March 16.

Chantilly — The McLean batting order isn’t loaded with sluggers, but the Highlanders showed Saturday that strong pitching and putting the ball in play is enough to get the job done.

Four runs were plenty for McLean starting pitcher Joey Sullivan. The junior right-hander allowed one earned run and five hits while walking one and striking out eight in six innings. Westfield put two runners on base in the bottom of the sixth, but Sullivan got out of trouble with a strikeout and a fielder’s choice.

“Joey Sullivan has got a big-time arm,” McLean interim head coach Ray Zdancewicz said. “He just came out and did a super job. Getting him on the mound, throwing strikes, kind of putting them on their heels a little bit and getting that run early kind of set the tone a little bit.

“We just did what we’ve been preaching pretty much from day one … to put the ball in play. Be tough two-strike hitters because we don’t have anybody that’s going to knock the ball out of the park—we have maybe one guy that even has the chance—so we need to be a little tougher and be productive.”

McLean took a 1-0 lead in the top of the second. Senior Jack Fant led off the inning with a single and, two batters later, freshman outfielder Matt Collins delivered a two-out, run-scoring single.

“We just did what we’ve been preaching pretty much from day one … to put the ball in play. Be tough two-strike hitters because we don’t have anybody that’s going to knock the ball out of the park—we have maybe one guy that even has the chance—so we need to be a little tougher and be productive.”

McLean added three runs in the third, thanks to four Westfield errors.

“[McLean] put it in play, that’s the biggest thing,” Westfield head coach Chuck Welch said. “They put it in play and we didn’t. I give them a lot of credit for [what] they did. I thought they did a tremendous job. We certainly didn’t make all the plays, but in high school, if you put the ball in play hard, your chances are pretty good of something happening … ”

Fant had two singles for McLean. Sullivan, senior center fielder Hunter Eckrod and junior Sam Pierce each had one single.

McLean freshman outfielder Matt Collins went 2-for-3 with a double and an RBI against Westfield on March 16.

Collins finished 2-for-3 with a double and an RBI.

“I think the sky is the limit for this kid, I really do,” Sullivan said about Collins. “I’ve never seen anyone that likes baseball more than he does.”

Fant is McLean’s number one pitcher. Sophomore catcher Caleb Beatty will be looked upon to provide the Highlanders with power in the middle of the order.

McLean opened the season with a 3-2 loss to Chantilly on March 13. The Highlanders will travel to face South Lakes at 6:30 p.m. on Wednesday, March 20.

“We know Westfield’s real good,” Sullivan said after Saturday’s game. “The past couple of years, we’ve gotten our butts kicked by them, so we came in a little bit more focused today than we did [against] Chantilly. When we played Chantilly, our team wasn’t in it. We weren’t focused. Today, I could tell we were much more focused and we were ready to play and we knew we wanted it.”