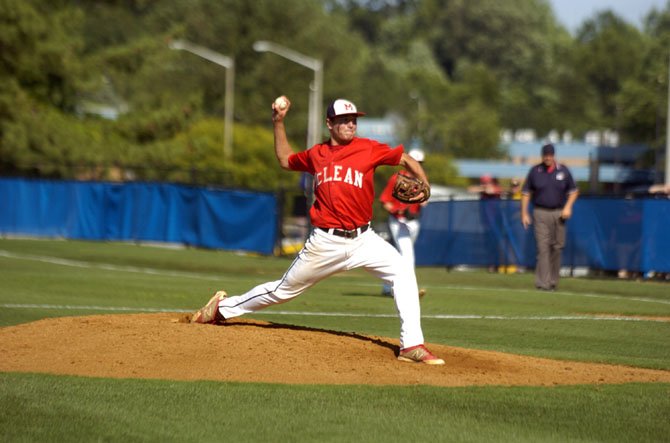 McLean senior Joey Sullivan pitched in his final game for the Highlanders on June 14. Photo by Craig Sterbutzel.

Sophomore shortstop Conor Grammes and the McLean baseball team fell short against Western Branch in the 6A state semifinals on June 14.

Senior pitcher Joey Sullivan stood with tears in his eyes, praising his teammates for how they responded to a slump in the second half of the season.

Head coach John Dowling credited his players for making his first year with the program a successful one.

Junior catcher Caleb Beatty said the Highlanders are capable of doing it all again next season.

The McLean baseball team ended the 2014 campaign with a 5-4 loss to Western Branch in the 6A state semifinals on June 14 at Robinson Secondary School. Trailing by two runs entering the seventh inning, the Highlanders put the tying run in scoring position, but fell short.

“That’s a gutsy performance by our team,” Dowling said. “We got beat by a good baseball team.”

Western Branch would defeat Chantilly the following day to win the state championship.

While McLean battled, the Highlanders ultimately fell victim to their own mistakes.

Western Branch’s first run came on a double steal in the second inning, tying the score at 1-all. With two outs in the inning, an attempt to throw out the runner heading for second base allowed the runner at third to score.

In the bottom of the third, Western Branch second baseman Kyle Butler hit a foul pop up that was dropped by McLean for an error. Butler would capitalize on his second chance, hitting a triple to right-center on the next pitch. No. 9 batter Jordan Mason followed with an RBI double and the Bruins were ahead 2-1.

“As a team, I couldn’t be prouder of these guys.”

With two outs and the score tied at 3-all in the bottom of the sixth, Western Branch shortstop Kyle McPherson hit a fly ball to right field that was misplayed into a two-run double, giving the Bruins a 5-3 advantage.

DESPITE THE MISTAKES, the Highlanders kept it close.

Trailing 3-1 in the top of the sixth, McLean designated hitter Grady Paine led off with a double and third baseman Jesse Jones followed with a single, giving the Highlanders runners at the corners with no outs. First baseman Jon Clines would drive in a run with a groundout to second, and Jones would score on a wild pitch, tying the game at 3. Left fielder Matt Bielamowicz delivered a two-out single to center, but Evan Blake, representing the potential go-ahead run, was thrown out at the plate trying to score. On the play, Western Branch catcher Devon Fisher, a 20th-round selection of the Boston Red Sox in the 2014 MLB draft, knocked Blake to the ground with the tag and stared at the Highlander right fielder while standing over him.

“The catcher came in pretty hot and that’s unfortunate,” Dowling said. “[Western Branch head] coach [Roland] Wright apologized to me after the game and wanted me [and] our kids to know that that’s not the type of program he’s built there. My issue with it was the catcher standing over the player and dropping the ball. That’s the umpire’s discretion whether or not he stays in the baseball game. Certainly, the kid’s safety needs to be paramount and that’s not behavior that we condone.”

Trailing 5-3 in the seventh, Beatty drove in a run with a double. After a walk to Paine, McLean had runners at first and second with one out, but the Highlanders failed to tie the score.

Sullivan, who will pitch for Virginia Tech, suffered the loss on Saturday, allowing five runs --- four earned --- and six hits in six innings. He walked three and struck out six.

Beatty went 2-for-4 with an RBI. Paine, Blake, Bielamowicz, sophomore shortstop Conor Grammes, and senior Ben Clines each had one hit for McLean.

McLean finished the season with a 15-12 record. The Highlanders started the year strong, winning their first five games and eight of their first 10. McLean stumbled after an 8-2 start, however, losing seven of its next eight.

McLean senior Jesse Jones (24) scores a run on a wild pitch in the sixth inning of the Highlanders’ 6A state semifinal matchup against Western Branch on June 14.

With a 9-9 record, the Highlanders managed to turn things around, winning six of seven to reach the 6A North region championship game. McLean finished region runner-up to Chantilly.

During the postseason, Sullivan allowed just one run in three elimination-game starts, throwing complete-game shutouts against South Lakes (Conference 6 quarterfinals) and Oakton (opening round of regionals). The senior right-hander allowed one run against Madison in the region semifinals, helping to secure the Highlanders’ first trip to a region final in program history.

“As a team, I couldn’t be prouder of these guys,” Sullivan said. “From where we were at one point at the end of the season, those two or three weeks where we were doing awful --- it just seemed like nobody wanted to be there ---- and then we got to the state semis, which is something (we’ve)always dreamed of. We were a couple inches away from going to the state championship and competing for that.”

DOWLING, who coached at Lee High School before coming to McLean, led the Highlanders to their deepest postseason run in his initial season.

“Our kids responded extremely well to adversity all year --- and we certainly met some adverse conditions there for a while --- but we figured it out,” Dowling said. “We knew the first eight games of the season were the baseball team that we had, and the team that could go out and compete every single night and they did that for seven innings today --- they competed.

“… We were very, very fortunate to inherit a talented group of kids and they played their butts off for us this season. Everybody likes to look at the coach because he’s around for a while, but the kids are the ones that win baseball games.”