A Voice for the Voiceless
Votes

A Voice for the Voiceless

On Saturday, Social Action Linking Together (SALT) held its annual Richmond Wrap-Up session in Vienna. One of the most active nonpartisan advocacy groups in Northern Virginia, SALT, has 1,200 members who bring the social, economic and justice teachings of their faith to bear on public policy and legislation. SALT has had an impact shaping public policy for more than 20 years. SALT Coordinator John Horejsi talked with The Connection about some of the group’s legislative victories and losses during the 2013 General Assembly “short” session. 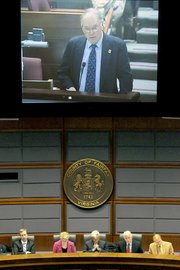 John Horejsi of Vienna, coordinator of Social Action Linking Together (SALT), testifies in the public hearing of the Fairfax Delegation to the Virginia General Assembly in January 2013.

A: “Our activism springs from the principles of faith and responsibility. Our activism on behalf of the vulnerable does not make us better than anyone else—but it does make us very lucky persons. Our appeal is to people of faith: ‘Out of the pew and into the lobby. Be a voice for the voiceless.’ Involvement in the political field is clearly a part of the vocation and activity of the lay faithful. Advocacy is part of everyone’s job description—even if you’re retired. By working together we generate sufficient activity to have an impact. Our community activism, to us, is simply democracy in action.

We seek to serve; not to be served. We are not lobbyists, we are service providers. Our service is our advocacy for the neediest. To us advocacy is the ultimate service— ‘service on steroids.’

Through our advocacy we seek to keep social justice issues front and center at the Virginia General Assembly. Through our advocacy, legislators are made aware that there is a responsibility to the needs of vulnerable people—measuring every policy by how it touches the least, the lost and the left-out among us.”

Q: What do you consider some of SALT’s most important victories?

In the past, SALT has advocated successfully for many issues, including:

Q: What were the most important SALT initiatives this legislative session?

A: “The ban on shackling pregnant inmates and Medicaid expansion. While anti-shackling legislation was defeated in the Militia, Prison and Public Safety Subcommittee, there has been progress by SALT and anti-shackling coalition groups to prohibit shackling through the regulatory process. There is still a need for legislation to stop this practice. Protection is still needed for some of Virginia’s most vulnerable women from being unnecessarily restrained—a practice that not only violates a woman’s dignity, but can detrimentally affect her health and the health of her pregnancy. SALT is currently a partner in this Medicaid Expansion Coalition. Right now, the governor has Medicaid expansion in his hands. He has the ability to create a path to Medicaid expansion, or the ability to veto that provision. Medicaid expansion will provide more than 30,000 Fairfax County residents with access to health care coverage. The expansion is a common-sense policy that will help over 400,000 Virginians. Ultimately, we hope the governor will make the right choice for Virginia and Fairfax County and work toward expanding Medicaid as soon as possible. We would like a clear statement that he plans to expand Medicaid. Every day’s delay costs Virginia $5 million in lost funding.

Q: You and other SALT members were in Richmond almost every day during this session. What do you think people would be surprised to learn about the way things work in Richmond?

A: “I would say with regard to human services, the bipartisanship that is attributed to the success for transportation funding this year doesn’t exist or doesn’t extend to human service priorities. Constituents know they are out-gunned by the special interest lobbyists. But, it would come as a shock to them to know there are 1,200 registered lobbyists at the state level, and there are more than eight special-interest lobbyists per legislator.

However, ‘never doubt that a small group of thoughtful, committed citizens can change the world; indeed, it’s the only thing that ever has,’ as Margaret Mean said. This is certainly true for all of the SALT successes listed earlier—starting with the lifting of the sales tax on food stamps.

I think readers would be surprised to know that all the success listed above—even the no-brainers such as removing the sales tax from food stamps—took anywhere from three to eight years to achieve success. Incredible persistence is required. We persist because justice demands it.

When it comes to issues and priorities for the poor it takes longer because resistance is built into the committee and subcommittee system where bills to help the needy are routinely killed by a majority of four or five subcommittee members. Equally frustrating is the fact that votes are voice votes—not recorded votes—making it difficult to identify opposition for vigorous education unless you can see every legislator and lip-read.

Q: Describe your experience as an advocate in the General Assembly.

A: “The legislature has become more partisan and contentious. It is no longer possible to get widespread legislator support. In Richmond legislation is passed and defeated when viewed through a partisan lens. Our recent experience is that to hope for any possible success we must enter into coalitions with other statewide groups. SALT has become partners in and out of coalitions to realize success for the EIC Expansion and the Medicaid Expansions.”