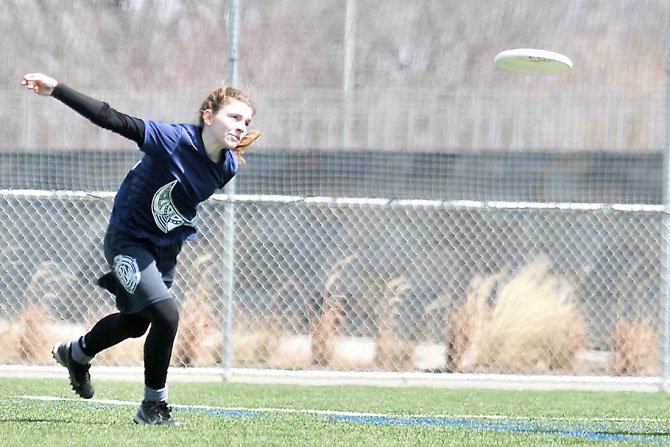 Allison Hahn sends the Frisbee down the field for the return throw after her team scored. Photo by Louise Krafft.

Arlington — Twenty-two teams playing at Washington-Lee and the new Long Bridge fields kicked off the 2013 Ultimate’s (Frisbee) season last weekend with the YULA Invite tournament. The Invite has become the largest high school Ultimate Frisbee tournament in the Washington Region. Teams from North Carolina, New Jersey, and throughout Virginia, Maryland and D.C. competed with local high school teams on Saturday and Sunday, March 23-23.

The Yorktown and HB Woodlawn boys are currently the Virginia State Champions, and will play against state rivals LC Byrd and Woodside HS as well as local teams from Jefferson, Woodson and School Without Walls.

HB Woodlawn Ultimate Varsity girls are currently U.S. Southern region champions (the highest level of national play). The have been the undefeated state champions since statewide play was available for girls. They have already started the 2013 season with undefeated play against college teams at VC Ultimate’s Virginia is for Layouts tournament last weekend. The

The Youth Ultimate League of Arlington (YULA) is a new league designed to promote the sport of Ultimate and love of the game for Arlington and the region’s youth from grades 8-12.