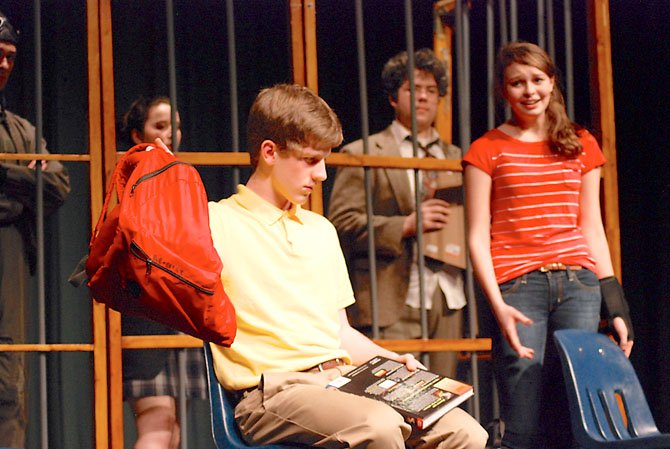 Austin, an autistic teenager (William Shipley), struggles to connect with his classmate Lily (Bonnie McClellan) while Ben Koses, one of the personified voices in Austin’s head, looks on in “The Other Room,” by Ariadne Blayde at West Springfield High School. Photo contributed

West Springfield High School won the state championship for drama last month at the Virginia High School League One-Act Competition Finals in Charlottesville. This is the first state drama title for West Springfield in 15 years. The theatre department presented “The Other Room,” by Ariadne Blayde, which tells the story of Austin, a high-functioning autistic teenager who tries to connect with a female classmate while battling the voices in his head.

The school will present an encore performance of The Other Room at 6:45 p.m. on Monday, April 8, before the monthly PTSA meeting. The performance will take place in the auditorium (at Door 6). The play runs 20 minutes, and admission is free.

“We’re thrilled that ‘The Other Room’ has been so well-received,” said Bernie DeLeo, West Springfield’s first-year theatre teacher. “I have a teenaged son with Asperger’s Syndrome, and I felt it was important to show people how autistics struggle to communicate and build relationships. April is National Autism Awareness Month, and I thought it would be especially appropriate to perform one last time, to help educate people about autism.”

The play features sophomores Bonnie McClellan and William Shipley, who were both among the eight Outstanding Performers at the Virginia High School League state championships.

The WSHS drama department is also producing The Drowsy Chaperone for their spring musical, with performances running April 25-28 at the West Springfield High Auditorium. Billed as “a musical within a comedy,” The Drowsy Chaperone is an affectionate send-up of musical comedies and their inherent silliness.

For more information about tickets, times and dates visit www.wshstap.org.