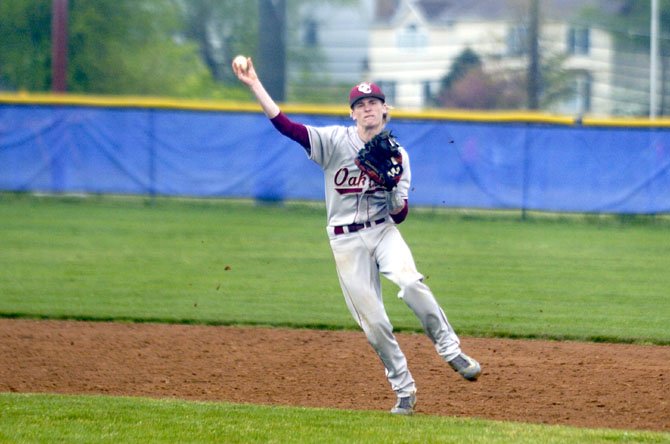 Chantilly third basemen Sonny Romine went 2 for 4 with a double and two RBIs against Oakton on Tuesday.

Chantilly — After an 11-1 start, the Oakton baseball team had dropped two of its last three games. The Chantilly Chargers felt they were close to being a contender, but a lack of timely execution led to a .500 record, including a 2-4 mark in the Concorde District.

With the bases loaded and two outs in the bottom of the seventh inning, something had to give on Tuesday night at Chantilly High School. The Oakton Cougars held a 6-4 lead and were one out from a return to the win column. The Chargers needed a clutch hit to tie, or potentially beat, the No. 4-ranked team in the Northern Region.

With the game on the line, Oakton pitcher Tommy Lopez assured the Cougars returned to their winning ways while Chantilly continued its search for a big hit.

Lopez ended the game with a strikeout, giving Oakton a 6-4 victory Chantilly. The left-hander walked three in the seventh, but pitched his way out of trouble to earn the save. Lopez took over in relief with a two-run lead in the sixth inning and retired Chantilly in order.

“His first inning was outstanding,” Oakton head coach Justin Janis said. “The second inning … you wouldn’t script it that way, but I’m proud of him for hanging in there and he did the ultimate job of closing out the inning and the game.”

Oakton pitcher Keith Knicely earned the win in relief, allowing two hits and one walk in 1 1/3 scoreless innings. Matt Gregor started on the mound, allowing four runs and five hits over 3 2/3 innings. The junior walked two and struck out one.

The Cougars improved to 13-3, including 5-2 in the Concorde District. 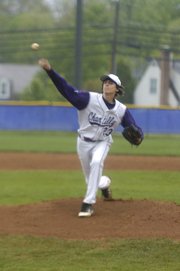 Chantilly sophomore Matt Hogle started on the mound against Oakton on Tuesday.

“[Every game is] important, especially down the stretch,” Janis said, “but it definitely felt good to come out and swing the bats well tonight and get a little momentum going as we start to close out the second half.”

Oakton held leads of 3-0 and 4-2, but Chantilly battled back to tie the score at 4-all in the fourth inning. Chantilly head coach Kevin Ford was pleased with his team’s offensive production, but the Chargers still needed another hit.

“It is frustrating because this is kind of the same game that we’ve had a couple times now,” Ford said. “We’ve been right in games and there have been a couple mistakes that have kept us from coming out on top. But I told our guys that, offensively, we definitely take away some good feelings from the fight that we had. We had a lot better at-bats tonight than we’ve had lately. We had some guys with some big two-out or two-strike hits that scored runs and put us in a position to win.

“We had bases loaded [in the seventh inning] and just needed one more.”

An RBI groundout by Oakton left fielder Brian Boehm increased the Cougars’ lead to 4-2 in the fourth, but Chantilly responded with a pair of runs in the bottom half of the inning. Designated hitter Kordell Hutzell drove in a run with a single and, two batters later, McGrath’s RBI single on a 0-2 pitch tied the score at 4-all.

Matt Hogle started on the mound for Chantilly. The sophomore pitched four innings, allowing four runs and six hits. He walked three and struck out three. Austin Margarida suffered the loss in relief.

“We’re a really talented team — we have the talent to win the region. We can play with anyone, we’re in every game, we’ve just got to find a way to get over that hump. … We’re still waiting on that person to step up. We need one or two more people to step up and we’re a region finalist team, I feel like.”

Oakton catcher Kyle Burger had an RBI single in the first inning. Second baseman Joey Bartosic doubled in the second inning, giving the Cougars runners on second and third with one out. Hogle would balk in Oakton’s second run.

Chantilly’s Romine finished 2 for 4 with a double and two RBIs. First baseman Eason Recto had an infield single.

What does Chantilly have to improve heading into the district tournament?

“I’d say we’ve just got to stay focused on our hitting and make adjustments at the plate throughout the game and just play how we can play,” Romine said. “We’re a really talented team — we have the talent to win the region. We can play with anyone, we’re in every game, we’ve just got to find a way to get over that hump. … We’re still waiting on that person to step up. We need one or two more people to step up and we’re a region finalist team, I feel like.”