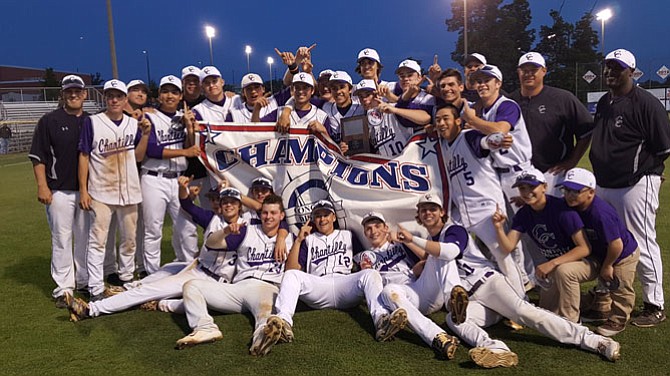 The Chantilly baseball team won the Conference 5 championship with a 2-1 victory over Oakton on May 22 at Westfield High School. Photo by Jon Roetman.

Chantilly junior Jared DiCesare pitched three innings in relief and earned the win during the Conference 5 championship game on May 22.

After driving in the go­ahead run in the bottom of the fifth inning, Chantilly’s Jared DiCesare stepped on the mound and ensured there would be no three-peat for the Oakton baseball team.

DiCesare gave the Chargers the lead with an RBI single down the third-base line and the junior right-hander pitched three innings of scoreless relief as Chantilly defeated Oakton 2-1 in the Conference 5 championship game on May 22 at Westfield High School.

Facing the Cougars in the conference/district final for the third straight year, the Chargers fell behind 1-0 after Oakton shortstop Joe Rizzo blasted a solo homer in the third inning. The Cougars remained in front until the bottom of the fifth, when Chantilly senior Kordell Hutzell tied the score with an RBI double off Oakton pitcher Toma Shigaki-Than. Three batters later, DiCesare snuck a grounder down the third-base line, giving the Chargers a 2-1 lead.

“[Shigaki-Than] located [the pitch] perfectly, but I know I just didn’t want to get behind in the count, so I wanted to see if I could drive something,” DiCesare said. “Thankfully, I found a little hole down third-base line.”

DiCesare, who came on in relief in the top of the fifth inning, retired six of the final seven batters he faced to secure the win.

DiCesare allowed two hits, walked one and struck out one in three shutout innings.

“He’s been consistent for us,” Chantilly head coach Kevin Ford said about DiCesare. “He’s our third baseman [and he] might be our best pitcher. As we’ve moved more and more into the postseason, we’ve looked to go to him more. He’s just really tough on the mound. He throws strikes. He just throws strike after strike after strike.”

Chantilly will be Conference 5’s No. 1 seed in the 6A North region tournament and will host Stonewall Jackson at 6:30 p.m. on Friday, May 29. Oakton will be the conference’s No. 2 seed and will host Battlefield.

This season, Chantilly again won both regular-season meetings with Oakton, but this time found a way to win a third time.

“It means a lot,” Ford said. “This is the third time in a row it’s been Chantilly and Oakton and we finally had to go to a neutral site to win one. ... Maybe Westfield is our lucky place.”

DiCesare finished 2-for-3 at the plate. Hutzell and Brady Ryan each had a hit for the Chargers.

Shigaki-Than suffered the loss for Oakton. The sophomore right-hander allowed two runs on four hits over six innings. He walked two and struck out eight.

“I thought he was really good tonight,” Oakton head coach Justin Janis said. “... He mixed all his pitches. He really didn’t give up a lot of hard-hit balls.”