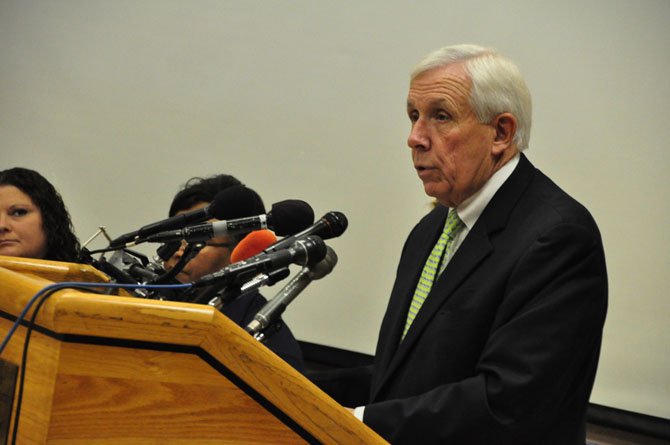 McLean — Del. Barbara Comstock (R-34) and Del. Tim Hugo (R-40) joined Rep. Frank Wolf (R-10) and others at the McLean Community Center Friday, May 3, to discuss the facts of human trafficking. The U.S. State Department estimated that human trafficking is the third largest source of profits for international organized crime, behind firearms and narcotics.

But Friday’s forum was held to look at the local angle of human trafficking, which Wolf called "one of the greatest human rights challenges we face today."

"Trafficking in persons takes a multitude of forms, ranging from child sex tourism in Thailand to teenage prostitution in Tysons," Wolf said. "A few years ago, a local church group sought my assistance to help end human trafficking in Thailand. I was happy to support the legislation they were advocating for, but quickly pointed out that sex trafficking wasn’t just occurring in faraway places, but right here in Virginia. The group was stunned. Frankly, most people have that same reaction, which underscores the importance of today’s forum."

Federal authorities are leading a probe into possible human trafficking at a residence on the 6000 block of Orris St. in McLean. Immigration and Homeland Security officials received a tip Tuesday night, April 30, about two women possibly being held against their will.

The women were rescued, and are currently being questioned.

Fairfax County Detective Bill Woolf of the Northern Virginia Human Trafficking Task Force said he could not comment about an open investigation, but confirmed that the Department of Homeland Security is leading the investigation.

WOLF CITED AN ARREST from March where a woman in Annandale was sentenced to 30 months for transporting women to work as prostitutes in her massage parlor. He also mentioned another March arrest where a man pled guilty to a commercial sex business that used hotels in Herndon, Sterling and Ashburn.

Hugo said he was shocked at how minor the punishments for crimes related to human trafficking were in Virginia.

According to the National Report on Domestic Minor Sex Trafficking, approximately 100,000 children in the U.S., with an average age of 12 to 14, are victims of these crimes. In the Eastern District of Virginia, in 2012, there were 21 cases involving 38 defendants and at least 37 juvenile and more than 260 adult victims of sex trafficking. Eight of the cases involved gang controlled sex trafficking.

Detective Mike Woolf, a member of the Northern Virginia Human Trafficking Task Force, said human trafficking can come in two forms, sex trafficking and labor trafficking, but it boils down to the same thing.

"It really comes down to the fact that people are exploiting other human beings, they’re using human beings as a commodity," he said. "We have sex trafficking in the form of prostitution, pornography and services like massage parlors, as well as other commercial sex activities that exist."

Woolf said among gangs in the area, law enforcement are noticing a shift away from drugs and into sex trafficking, which makes sense for criminals by the numbers.

"To get involved in that scenario is a minimal investment. It may cost a hotel room and clothes and food, but when you think about it, there’s no money needed to invest to get your sex trafficking business up and running," he said. "If somebody’s working an average of one to two girls, which is average in this region, they have a quota, $500 a night, which is reasonable for Northern Virginia, that trafficker is making $1,000 a night, about $15,000 a month and maybe $180,000 a year of tax free money."

Woolf compared it to narcotics, which requires a capital investment up front. He gave $32,000 for a kilo of cocaine as an example of a price a dealer might pay. The drug dealer would sell that amount for around $64,000, and the operation also includes more people to cut and distribute the drugs.

"Narcotics are a finite resource. If there’s a big drug bust on the border, they’re going to be out of their product for a period of time," he said. "The reality is, girls are a renewable resource. If they lose one, it’s very easy to go out and recruit another girl within 24 hours, again, with that minimal investment." 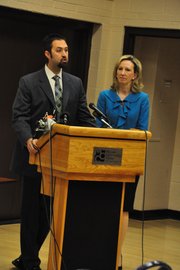 Del. Barbara Comstock (R-34) and Detective Bill Woolf speak about human trafficking at the McLean Community Center in May. Woolf testified at a sex trafficking hearing on Capitol Hill on Feb. 26.

He also said is was more difficult for law enforcement to police human trafficking compared to drug trafficking. If someone is pulled over with a kilo of cocaine in the passenger seat, it becomes an open and shut case. If there’s a young girl in the car, detection isn’t easy for officers, particularly when many of the girls have been trained to avoid detection.

"These girls are not self-reporting victims. They’re not picking up the phone and calling the police… the majority of the time these girls are being coerced into it," he said. "They’re being told and believe that they want to be there. So a lot of the times they can be viewed as consenting participants."

Sara Pomeroy, founder and director of Richmond Justice Initiative, said her organization is trying to come up with long-term solutions to the problem.

"We focus not just on providing information to potential victims about the tricks and lures of traffickers, but to prevent the issue from the demand side as well," she said. "We need to look five or 10 years down the road for long term, systemic solutions. We need to get to the victim before she becomes a victim, get to the buyer and the trafficker before they grow up with tendencies and behaviors that will create the demand."

Comstock said the purpose of the forum was to keep the community up to date on the issue.

"We want people to know that this is very much a local issue, local to Virginia, local to Fairfax County, local to McLean," she said. "This is just the beginning of a process."

THE POLARIS PROJECT, an organization that combats human trafficking around the world, operates a National Human Trafficking Hotline, which can be called at 888-373-7888, or texted at BeFree (233733) to report suspected trafficking activities, connect with local anti-trafficking services and get general information.