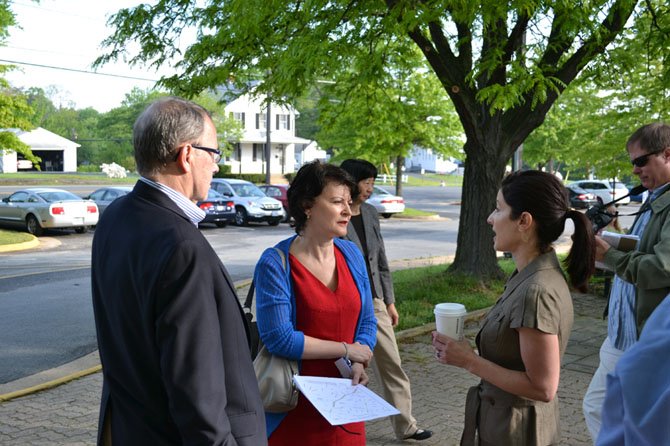 Chesterbrook Elementary School held a walk/bike to school day last week, which served two purposes. The primary purpose was to encourage families and students to enjoy the benefits of walking and biking. Fresh air, sunshine and exercise all helped bring smiles to the faces of the many students who walked or biked to school last Friday.

A large parade of children, bikes, moms, dads and dogs could be seen making their way down Kirby Road to the elementary school. What was less visible was the concern on the faces of parents. But according to many of the parents, as well as volunteers from the neighborhood-based Connect-McLean organization, the safety of the students who walk to this school is concerning. It was Kirby Road neighbors who organized Connect-McLean in hopes of addressing the safety of walkers and bikers in the neighborhood.

“It would be so lovely if we could walk because we’re really not that far from the school,” said Kristen McLean, as she walked her children Halle and Max to school. “I would love to see some viable sidewalks that I wouldn’t have to worry about getting hit by a car as we’re walking to school.”

KIRBY ROAD is a major thoroughfare in McLean that carries heavy commuter traffic, an estimated 9,300 cars per day according to a traffic study done two years ago. Eighty five percent of those cars are speeding. In fact, they are traveling at least 46 miles per hour, according to the study. But the most dangerous problem, according to many parents who would otherwise walk their children to school, is that there is no consistent system of sidewalks leading to the school. Children are sometimes seen walking in the drainage ditch for lack of sidewalks on Kirby Road, according to parents and members of Connect-McLean; especially those students who are walking to Longfellow Middle School.

“I guess the biggest problem has been, when you walk along the sidewalk right past the swim club, you’re pretty much right on the shoulder,” said parent Ben Cramer. Cramer walks his children to school every day, weather permitting. But he believes that the speed limit should be lower. The general speed limit is 35 mph in front of Chesterbrook School, as opposed to 25 mph in the Lemon Road School zone.

Kirby Road, where Chesterbrook Elementary School is located, is plagued by heavy commuter traffic and a shortage of continuous sidewalks.

At one time, all students within one mile of the school used to walk or bike. But because of the safety issues for pedestrians, the school’s administration implemented a bus mandate, which calls for all students to be bussed, regardless of how close they live to the school.

“It is dangerous. There’s no other way to say it,” said parent Oliver Garcia, who lives within sight of the school, and walks his children there every day. He is especially concerned about commuters who cut around vehicles who are stopped for children in the crosswalk. “We have had numerous instances where we are in the crosswalk, and all of a sudden you cross in front of a stopped car and you’re confronted with nearly getting hit by a moving car going northbound on Kirby.”

State Sen. Barbara Favola (D-31), whose jurisdiction includes a portion of Kirby Road, attended the event on Friday. She says that she is a strong advocate for the Connect-McLean project.

PART OF THE CHALLENGE, according to many of those involved, is that traffic and infrastructure decisions are often made with both county and state involvement. “So whenever you have two government entities involved it gets a little complicated,” Favola said. “I will make it a point to understand in detail what the process is so I can help the citizen activists.”

Pearce said that Connect-McLean has also been working closely with Del. Bob Brink (D-48), who Pearce said has been reaching out to a number of residents. Brink, who also was in attendance on Friday said, “What I hope comes from today is greater awareness and involvement of parents and kids on the benefits of walking and biking to school. And then a greater focus on the traffic and street conditions in this area that could be improved to help kids use other ways of getting to school.”

In addition, Supervisor John Foust (D-Dranesville) has been working toward filling in one segment of missing sidewalk near the school. And Connect-McLean has also met with State Sen. Janet Howell, who they said has agreed to make this issue a priority.