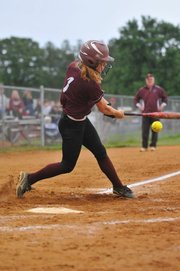 Moments after the Falls Church left fielder made the catch for the final out of the inning, Sable tripped over the third-base bag and crashed into the dirt.

The following inning, Sable belted a run-scoring triple. As she headed for third base, someone in the crowd yelled, “Don’t let that base get the best of you!”

It was all fun and games for the Mount Vernon softball team on Tuesday night, as the Majors defeated Falls Church 23-2 in five innings during the quarterfinal round of the National District tournament at Mount Vernon High School. The Majors secured a berth in the Northern Region tournament and many players padded their offensive statistics.

While Mount Vernon enjoyed a lopsided victory, the Majors plan on getting down to business and bringing home a district championship.

Mount Vernon finished with an 11-3 National District record during the regular season, earning the Majors the No. 2 seed in the tournament. Two of the Majors’ losses came against Hayfield, the No. 1 seed and owner of a 21-0 record. Mount Vernon’s other district defeat came against Washington-Lee, a 3-2 loss March 3.

After dispatching No. 7 Falls Church, Mount Vernon will host No. 3 W-L in the semifinals at 6 p.m. today. The Majors stressed the importance of not overlooking the Generals, but the team wants another shot at Hayfield in the district championship game.

“We’ve been too close,” senior catcher Tamara Warren said, “not to take the title this year.”

Warren, senior second baseman Ashleigh Sable and senior pitcher/shortstop Megan Cole have started at the varsity level since they were freshmen and faced Hayfield in the district semifinals each season. Hayfield beat Mount Vernon in the 2010 and 2012 semifinals. The Majors got the best of the Hawks in 2011, but lost to Yorktown in the championship game.

“We’ve been too close not to take the title this year.”

This year, Hayfield beat Mount Vernon 11-1 on March 21 and 2-0 on April 23. The second meeting was scoreless after six innings. The Hawks are led by district Pitcher of the Year Taylor Neuhart.

“Clearly, we’ve got to be able to show a lot of discipline at the plate with Taylor pitching,” Mount Vernon head coach Daniel Coast said of how to beat the Hawks if the two teams meet in the district final. “… A lot of teams, including us, have been chasing [Neuhart’s pitches out of the strike zone]. We’ve just got to show more discipline in the box and we’ll be able to get enough runs …” 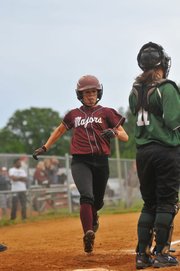 Zyzyk was named National District Player of the Year. She pitches for the Majors and bats leadoff. She entered Tuesday’s game with an onbase percentage of .717.

“Between her walks and her hitting,” Coast said, “her on-base percentage is out of this world.”

Ashleigh Sable was voted first-team all-district at second base. Warren and Cole were named to the first team as at-large players.

Cole bats third in the lineup and has developed into the team’s top pitcher.

“The leadership she gives as a captain,” Coast said, “is really key.”

Against Falls Church, Ashleigh Sable went 2 for 3 with five RBIs. She tomahawked a two-run double over the left-fielder’s head in the second inning, giving the Majors a 3-2 lead they would not relinquish.