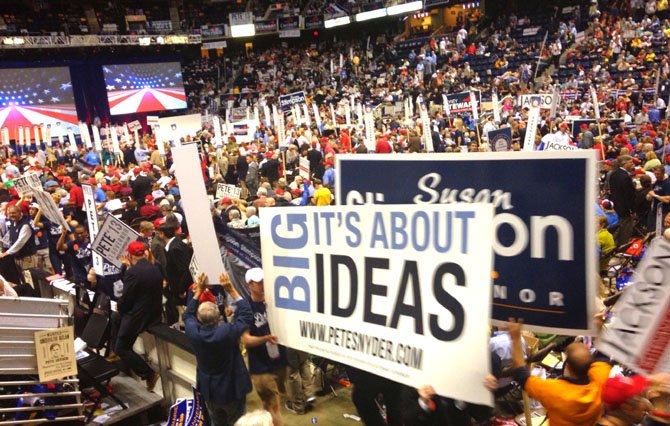 Supporters parade through the Coliseum as they wait for the ballots to be counted. Photo by Michael Lee Pope.

Perhaps the biggest sign that the Tea Party has taken control of the Republican Party of Virginia was the yellow Gadsden flag emblem that appeared on placards distributed by supporters of Jeannemarie Devolites Davis, who was one of seven candidates vying to be the nominee for lieutenant governor last weekend at a raucous convention in Richmond. Davis, who represented Fairfax County for a decade in the General Assembly, has a reputation as being a moderate. And yet despite her embrace of the "don't tread on me" iconography, she was eliminated on the first of four ballots in the hotly contested race. "Frankly, I'm rather appalled by the results, with the ideologically narrow scope of the Republican ticket that emerged in Richmond this weekend," said former Del. Vince Callahan (R-34), who represented Fairfax County for 40 years. "You're turning off the vast majority of Virginians and a significant portion of the Republican base." The vast majority of the party faithful who packed the halls of the Richmond Coliseum last weekend were looking for the most conservative candidates possible. Republicans were going to select their slate in a statewide primary until last year, when Tea Party supporters of Attorney General Ken Cuccinelli seized control of the executive committee and changed the rules. The primary was spiked in favor of a convention, and moderate Lt. Gov. Bill Bolling dropped out of the race, leaving Cuccinelli to accept the nomination of his party by acclamation without opposition Saturday morning. Cuccinelli used the opportunity to underscore his roots in Northern Virginia. "I worked with the Democrat Board of Supervisors in Fairfax County to stop the EPA from trying to treat rainwater like a pollutant," said Cuccinelli. "And we won." 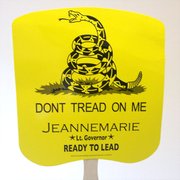 The Jeannemarie Devolites Davis campaign tried to adopt the symbol of the Tea Party, but she was eliminated in the first round of voting.

BUT NORTHERN VIRGINIA was not popular among many of the delegates here, even though the region had more representatives than any other part of the state. Fairfax County had more delegates than any other jurisdiction because of how the seats were allocated, which was based on a formula using the number of Republican votes in the last gubernatorial and presidential elections. When asked about the influence of the region, many of the delegates who packed the Coliseum last weekend said they were suspicious of Northern Virginia.

“When you get bigger populations, you get more people wanting more stuff," said Craig Gilpin, a delegate from Culpepper. "It's too many, unfortunately, too many liberal Yankees in my opinion. That's where they congregate because of its proximity to D.C." In speeches and in one-on-one conversations, Republicans who participated in the convention sounded that theme over and over — that Democrats supported people wanting more and more resources from the government. One popular bumper sticker seen in the parking garage outside the Coliseum asked: "Are you a maker or a taker?" Clearly the party faithful who gathered in the capital of Virginia last weekend considered themselves makers — supporters of the capitalism and the free enterprise system. The convention had a strong undercurrent of evangelical influence, at times taking on the feeling of a religious revival.

"The very moral fiber of the county is dependent on the strength of the family," said Judy Cook, a delegate from Chantilly. "Those are the issues that are decided on by politicians."

"I worked with the Democrat Board of Supervisors in Fairfax County to stop the EPA from trying to treat rainwater like a pollutant. And we won."

PERHAPS THE BIGGEST surprise of the convention was the victory of conservative preacher E.W. Jackson in the race for attorney general. Few of the delegates considered the pastor from Chesapeake to be a frontrunner until he delivered a barnburner of a speech Saturday afternoon. His supporters held electric candles during the speech, which was delivered with a hellfire-and-brimstone style that had delegates roaring with approval when it was over. Jackson led the other candidates on the first ballot, and kept his lead as other candidates were eliminated in three more rounds of voting. Although many of the Northern Virginia delegates were supporting high-tech businessman Pete Snyder, Jackson was able to win after 10 hours of voting. "We will not only win an election in November, we will win the hearts and minds of our people and we will save this commonwealth and save this country," said Jackson. "God will show us the way, but Virginia must lead the way, and let liberty light the way." The other competitive race was for attorney general, which is considered a traditional stepping stone to running for governor of Virginia. The race featured Del. Rob Bell (R-58) of Piedmont and state Sen. Mark Obenshain (R-26) of Harrisonburg, whose father was the party's candidate for the U.S. Senate in 1978 until he was killed in a plane crash that year. Now the son is following in his footsteps, running for statewide office in a party that has become much more conservative in recent years. "Are you ready to fight and defeat the EPA and its war on coal? Are you ready to fight to stop Obamacare in its tracks?" Obenshain asked delegates. "Are you ready to fight to preserve our right to work laws here in Virginia? And are you ready to fight to secure our Second Amendment rights?"

"Frankly, I'm rather appalled by the results, with the ideologically narrow scope of the Republican ticket that emerged in Richmond this weekend."

THE SELECTION of Jackson as the candidate for lieutenant governor throws a wild card into the campaign, one that may change the dynamics of how the campaign will unfold. Democrats responded by criticizing the pastor's previous public statements comparing Planned Parenthood to the Ku Klux Klan and referring to gays in the military as "sexually twisted." Democrats now feel they have a new tool to paint Cuccinelli and the Republican ticket as too conservative for Virginia. "The vitriol put forth by E.W. Jackson is offensive and utterly unbecoming of anyone hoping to hold elected office,” said Fred Sainz, vice president of communications for the Human Rights Campaign. “These candidates couldn’t be more out of step with the values that a vast majority of Virginia voters hold.” Although the election for lieutenant governor is normally a sleeper, the race this year has taken increased prominence. Because the state Senate is deadlocked between 20 Democrats and 20 Republicans, the next lieutenant governor will determine which party controls half of the General Assembly. That puts Jackson at the center of a fight for control of the state Senate. "This is the most conservative Republican ticket that I can think of over the past 30 years," said Steven Farnsworth, professor at the University of Mary Washington. "It also comes to the fore at a time that Virginia has moved very clearly into a purple state status."

THE COMING election may be a test case for how conservative candidates can be and still win. Farnsworth says that the slate of candidates on the ballot are the most conservative in at least 30 years, indicating that the state party has drifted to the right — especially with the dynamic of a convention selecting the most ideologically pure candidates possible. That leaves moderate Republicans frustrated by an inability to gain traction. 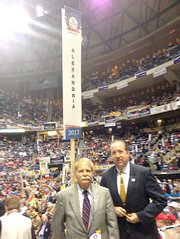 "Virginia Republicans have raised the stakes for anyone who believes that government should be about results for Virginia families, and not a platform for an extreme and divisive social agenda," said Catherine Waddell, a former Republican who represented Richmond in the House of Delegates. "None of us can afford to sit on the sidelines and let this ticket turn Virginia into a playground for their extreme agenda." Part of that shift to the right was accelerated by the move from a statewide primary to a caucus of party faithful. When Jackson ran in the primary for the U.S. Senate in 2012, he was able to muster only about five percent of the vote — coming in last place in a four-way race. But the dynamics of a convention are very different, and Jackson led the voting from the start, even coming close to achieving the 50 percent threshold to win on the first ballot. "Jackson might be a drag on the ticket for Cuccinelli, or at least a serious distraction," said Geoff Skelly, political analyst for the University of Virginia Center for Politics. "If Jackson does prove to be a true liability for the Republican ticket, then they will probably look back on the decision to shift to a convention with some remorse."