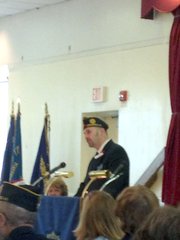 Amongst all the commotion with supporters of the American Legion and Veterans of Foreign Wars (VFW) funneling into the auditorium for the Memorial Day Remembrance Ceremony in Springfield, Gary Welch tapped the microphone letting everyone know 2:59 p.m. was approaching. 2:59 was the appropriated time when everyone was to silently honor those who served in the armed forces.

Welch is a commander at American Legion Post 176 where the event was held. Once the clock struck 2:59, the place was silent enough so that only the moaning air conditioning was heard. Once the moment of silence ended, the ceremony was underway.

Local dignitaries who came to honor the soldiers included Chairman of the Fairfax County Board of Supervisors Sharon Bulova, state Delegates Dave Albo (R-42) and Vivian Watts (D-39). The crew from Fairfax County Fire and Rescue Station 22 arrived as well to pay their respects. 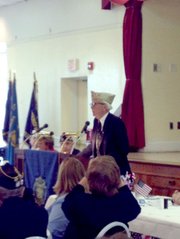 American Legion Commander Dave Wallace began with opening remarks about what he felt is the true meaning of Memorial Day. Wallace stated in his speech, “This day is just not about a three day weekend, it’s about those who have given up their todays and tomorrows for this nation.” He went on to proclaim that those who have fallen “paid the ultimate price so we can have this day.” Shortly after applause, Commander Gary Welch took to the podium to introduce guest speaker Peter Thomas.

At the time when Commander Welch was going through Thomas’s biography, a solemn tone captivated the packed auditorium. Every veteran, American Legion, and VFW member wearing their signature pin laden caps had a look of common solidarity. Whenever one made eye contact with another they would exchange nods or whispered greetings. A camaraderie shared by an experience only they know. One of those men was Red White. 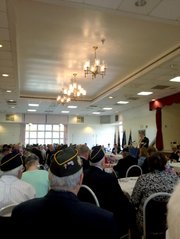 A Memorial Day ceremony in Springfield.

White, 88, a member of American Legion for 65 years, is retired from the Navy and served during World War II. “Commemorating and remembering the ones who gave their lives is by far the most important for me,” White said, “I had never seen action so I feel that I have to honor those who did even more.” Afterward, Peter Thomas, another veteran of World War II who served in five major campaigns in Europe, took the stage.

Thomas told the crowd about his experiences, describing the honor and horrors that came with serving. He wanted to make the point that all were indebted to the nation, “My parents were European and they said to me, ‘you live in the greatest country in the world. Give back to it.’” He closed with a poem and was met by a standing ovation. Minutes later, at the end of the ceremony, “Taps” was played to the solemn crowd.

With the ceremony officially over, a barbecue meal was served where veterans and their families ate together. This displayed that this is also a celebration, as General George Patton said, “It is foolish and wrong to mourn the men who died. Rather we should thank God such men lived.” 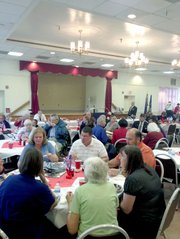 Veterans and their families attended the Memorial Day ceremony.