Kincaid, 48, won in a four-way race with 53.74 percent of the vote against Bryan Wolfe, the GOP candidate, and independents Chris DeCarlo and Robert Rivera.

The contest was the only county-wide office on the ballot this year, a special election to fill the post held by Democrat Stan Barry, who retired midway through his fourth term last July.

Kincaid’s decisive victory ends a race that became increasingly rancorous in the past several weeks, with near daily attacks from the Wolfe camp alleging intimidation, vandalism and "hypocrisy" over Kincaid’s purchase of firearms.

Kincaid said she would rather focus on the positive aspects of campaigning.

The Fairfax County Sheriff’s Office, the largest in the state with more than 600 employees and a $63 million budget, has three primary functions: operating the Adult Detention Center, providing security in the courthouse, and serving civil papers, such as eviction notices, child protective orders and subpoenas. 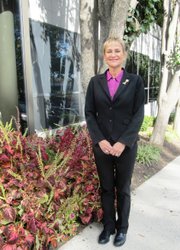 THE SIGNIFICANCE of being the first woman in the county’s history to serve as sheriff — succeeding 76 men in the department’s 271-year history — is not lost on Kincaid.

She began her career with the sheriff’s office in 1987 as a summer intern. As she rose through the ranks in the male-dominated profession, Kincaid said she often took inspiration from her mother, who died in 2003 after a long battle with breast cancer.

During an interview in October, Kincaid said her mother was often her biggest cheerleader and her hero.

"I saw the fight she had with breast cancer, the obstacles she overcame. She was my hero," Kincaid said. "And from the beginning, she would say ‘you could be the first female sheriff.’"

In 2008, Kincaid received the Distinguished Service Award, the agency’s highest honor. In 2011, she was eligible to retire, but chose to continue her career.

"Throughout the years, my mom’s words had been on my mind," Kincaid said. "I never thought the race was about me. I wanted to run for this office because I care about our 600 employees and the community we serve."

Kincaid, who has worked all four divisions of the department, said her first order of business will be to sign the civil service protection agreement which guarantees due process for department employees.

"I've been on record and said countless times that the primary thing it does it prevents any employee for being fired without just cause and prevents any political retaliation," Kincaid said.

Kincaid also said she was "passionate about collaboration with the community," and enhancing services of the sheriff’s department, particularly in the areas of mental health and programs aimed at reducing recidivism.

She said she’d like to expand one of the programs called Project Lifesaver, a program that provides tracking devices for people who tend to wander, such as the elderly with Alzheimer’s or children on the autism spectrum.

Kincaid also made diversity a key issue of her campaign, and said she was "deeply committed to equal protection of the rights of all members of our community."

"Diversity is as important to me as it is to the citizens that I will serve. When I became a deputy sheriff in 1987, women were underrepresented in policing. The same can be said of many other underrepresented groups as well," she said, adding that the office must "face up to the evolving needs of the community and the expectations placed upon its top leadership."

TO RELIEVE THE STRESS of an intense job, Kincaid said she enjoys working out, watching NFL football and making jewelry that she donates to charities.

"One of my proudest moments was running in the Ovarian Cancer 5K. I had made 112 pairs of earrings with silver and teal. When we started the race, I could see all these sliver and teal earrings. That was such a gift to me, to see these courageous women wearing my earrings," Kincaid said.