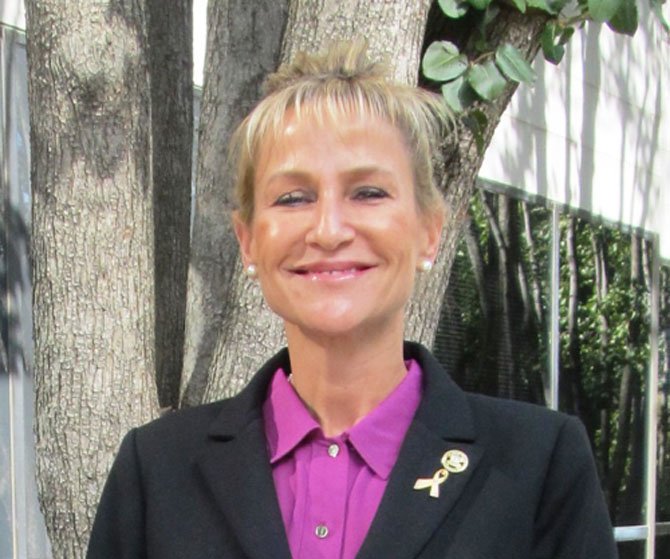 Like many of her neighbors, Vienna resident Jane Li said she didn’t know Fairfax County had a sheriff’s department until a few weeks ago. 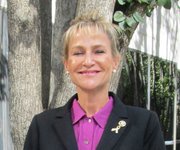 “That’s when I started to see the campaign signs along Hunter Mill Road, and I thought I should find out what the sheriff does,” she said.

The sheriff’s office, with more than 600 employees and a $60 million budget, has three primary functions: operating the Adult Detention Center, providing security in the courthouse, and serving civil papers, such as eviction notices, child protective orders and subpoenas.

“The police do a good job of rounding up the bad guys, and the sheriff’s deputies make sure they stay where they’re supposed to,” said Supervisor Jeff McKay (D-Lee), a reserve deputy sheriff himself. “Most people don’t know the sheriff exists because they’re not doing anything wrong.” 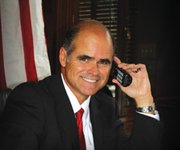 Bryan Wolfe, a retired officer with the Fairfax City Police, was selected Officer of the Year twice during his 26 years with the police department.

“This race matters,” McKay said. “There’s the potential for a lot of things to go wrong in courthouse security. We’ve never had that happen. No one has escaped from the jail; no tragedies at the courthouse; the sheriff’s department returns money to the general fund, and deputies do a lot of things that we take for granted.”

Fairfax County Sheriff’s Capt. Stacey Kincaid, the Democratic candidate, and her Republican opponent, retired Fairfax City Police Officer Bryan A. Wolfe, agree the campaign is an opportunity to educate residents about the role of sheriff.

Stacey Kincaid has made diversity a key issue of her campaign:

“Diversity is as important to me as it is to the citizens that I will serve. When I became a deputy sheriff in 1987, women were underrepresented in policing. The same can be said of many other underrepresented groups as well. The Fairfax Sheriff’s Office has been slow to adapt to the change. No longer can values be self-serving. It is my belief that the Office of the Sheriff must face up to the evolving needs of the community and the expectations placed upon its top leadership. I am committed to developing new strategies and approaches that can be used to increase our effectiveness and, in turn, better serve our community. I am deeply committed to equal protection of the rights of all members of our community.”

For more information on Stacey Kincaid, go to http://www.stacey...">www.staceykincaid....

Bryan Wolfe has said better programs for the mentally ill would be a top priority if he is elected sheriff:

“The mentally ill are currently thrown in with hardcore criminals in a toxic situation. That’s why I want the mentally ill whose only offense is causing a disturbance or committing a misdemeanor diverted into a program that helps the underlying problem, which is psychiatric and not criminal.

“As sheriff I want to start a Crisis Intervention Team approach modeled on the program currently in effect in Memphis. I propose that deputies receive an initial 40 hours of specialized training from experienced mental health professionals and law enforcement experts. After completing the initial training, qualified deputies would have annual in–service training and an additional eight hours of classroom work. The goal of this new CIT program is to provide immediate response to situations where the mentally ill are in a state of crisis and to prevent, reduce or eliminate potential injuries to deputies and inmates. Finding appropriate care — whether in the ADC or in an outside mental health facility — and working on a treatment program will help keep the mentally ill out of jail.”

For more information on Bryan Wolfe, go to http://www.wolfef...">www.wolfeforsheri....

But that may be the only issue on which they agree.

Kincaid, a 26-year-veteran of the sheriff’s department, said her first order of business if elected would be to sign the Civil Service Protection Agreement which guarantees due process for department employees.

“I've been on record and said countless times that the primary thing it does it prevents any employee for being fired without just cause and prevents any political retaliation,” Kincaid said.

Wolfe does not see the protection agreement as a priority. “That’s a critical difference between me and my opponent,” Kincaid.

Instead, Wolfe said his first act as sheriff would be to “modernize” the department with video recording equipment in the jail.

“Video cameras protect inmates and deputies in the jail and the cameras protect the taxpayer from frivolous lawsuits and suspicion of law enforcement generated by lawsuits,” said Wolfe, who said that Kincaid “has said several times that it’s too costly” and “it’s a solution for a problem that doesn’t exist.”

The contest is the only county-wide office on the ballot this year, a special election to fill the post held by Democrat Stan Barry, who retired midway through his fourth term in July.

If elected, Kincaid will become the first woman sheriff in the County’s history, and one of a handful of women sheriffs in the nation. A 26-year veteran of the sheriff’s office, Kincaid has worked all four divisions. She began her career with the sheriff’s office in 1987 as a summer intern, and in 2008, she received the agency’s highest honor, the Distinguished Service Award.

A self-proclaimed “rookie politician,” Kincaid soundly defeated acting Sheriff Mark Sites for the nomination in a July caucus, 63 percent to 37 percent. She won with the guidance of Kate Hanley, a family friend and former chair of the Fairfax County Board of Supervisors.

Wolfe garnered the Republican nomination in late August. Although he has been endorsed by several prominent local Republicans, he has not received any campaign contributions from the Fairfax County GOP.

While the race has put the sheriff’s office in the spotlight, it has also exposed the uglier side of politics. One of Wolfe’s first acts as a candidate was to do “oppo research” on Kincaid and her family. Through the Freedom of Information Act, he requested all of Kincaid’s emails, iPhone photos and texts.

In August, he called Kincaid a “hypocrite” on gun control issues, and said he was motivated to run for the office after hearing Kincaid say she supports expanded background checks on firearms. Wolfe, an NRA member, opposes such measures.

While declining to confirm or deny Kincaid’s allegations that she recently purchased two AR-15 rifles, Kincaid said she is a responsible gun owner and has purchased firearms legally.

"When addressing the nominating body of the Fairfax Democrats, Stacy Kincaid said that she was in favor of both an assault weapons ban and a ban on high capacity magazines,” wrote McConville.

“Specifically she railed against the notion that anyone would need either. I guess that is what she needed to say to get the nomination. Why then, did Stacy Kincaid order and purchase, for her own personal use, both an AR-15 Rifle and multiple high capacity magazines? This is hypocrisy of the most blatant sort, and should cost her the election now that it has become known,” McConville said in the statement.

Kincaid declined to comment on McConville’s statement, but said she stood by her earlier statements.

Wolfe also alleged that Kincaid’s supporters tried to intimidate him by vandalizing his vehicles and tearing up a flower bed on his property in Clifton.

"They are bullying me … and now the intimidation factor is affecting my volunteers,” Wolfe said in a phone call on Friday. “(My volunteers) don't want to drive their cars into Fairfax County with my signs because they’re afraid their vehicles will be vandalized. They tell me 'This has gotten too hairy for me’.”

Wolfe said the repeated vandalism has impacted his entire family. “I just want the race to be over. I want to get my life back,” he said.

"Unfortunately vandalism seems to be a common occurrence. My campaign has had a number of instances where my signs have been stolen or destroyed,” Kincaid said in a call Sunday.

“While the appropriate response is to report these incidents to the police, as a law enforcement officer, I have no intention of diverting police resources for such childish behavior,” she added. “Campaigns are about discussing the issues and making the community a better place and there is no place in campaigns or otherwise for acts of vandalism to personal or campaign property."

The two major party candidates are joined on the ballot by independents Robert Rivera, a security analyst and former sheriff’s deputy, and Chris DeCarlo, a propane salesman.

A frequent candidate for local offices, the 55-year-old DeCarlo, who is also running against Del. Eileen Filler-Corn, the Democratic incumbent in the 42nd district, has livened up the race with rap videos against government corruption.