Beauty Found After a Catastrophic Event

Hub Theatre presents ‘Carried Away on the Crest of a Wave’ 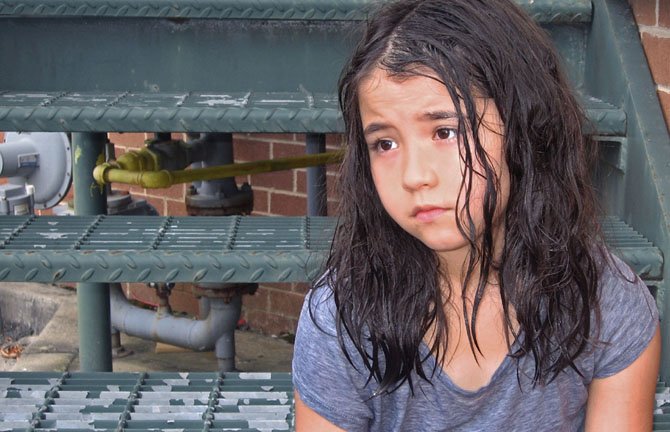 Hedy Hosford as the orphan girl from the play, "Carried Away on the Crest of a Wave," which explores the enormity of the 2004 Indian Ocean tsunami. Photo by Hayuru Taima

Finding new plays for local area audiences is something Helen Pafumi, Hub Theatre, artistic director relishes. She seeks out plays that will fascinate, rivet and enthrall. She has an affinity for newer American writers and Canadian playwrights who may be lesser known in this area.

Pafumi has found a work by Canadian playwright David Yee, with the intriguing title, "Carried Away on the Crest of a Wave." Pafumi was attracted to the play because it deals "with the aftermath of an incredibly huge event in a unique way. The writing is poetic, gutsy and wonderfully thoughtful." The play investigates the enormity of the 2004 Indian Ocean tsunami.

Yee's play centers on stories of "individual's healing, rebuilding, sadness and hope." The work is "based on true events, interviews with survivors, and stories." With its six-member cast, "this is a play that embraces life," added Pafumi.

What can the audience expect? Playwright David Yee said, "I was interested in capturing the tsunami's moment of impact in a more metaphorical way. The set is a statement piece, almost installation art, and the sound, costumes and lights will guide us into the varied locations that need to be created for these many different stories. The audience can expect a play that is at times shocking, heartbreaking and surprisingly funny as well."

Yee suggested his "work will bring you somewhere unexpected. This, I think, is my job as a writer: to lead you to a place you never knew was out there." He took what he "learned in 5 years about this epic event and distilled it, not as an event-log of the incident, rather as an extra-narrative account of how it impacted people."

When asked what he wants audiences to come away with after seeing this play, Yee responded, "Hope. That’s the big thing. It’s the thing I didn’t expect to find when I set out to write the play, to begin with. But it’s there. In every interview I did, every story I was told from survivors, some people who had lost everything… their stories were stories of hope."

Andrew Ferlo one of the cast members wants the audience to know that even "with such heavy, heart-breaking subject matter, 'Carried Away' is a hopeful play...ultimately the message is one of connectivity and the hope that comes from it." See for yourself.