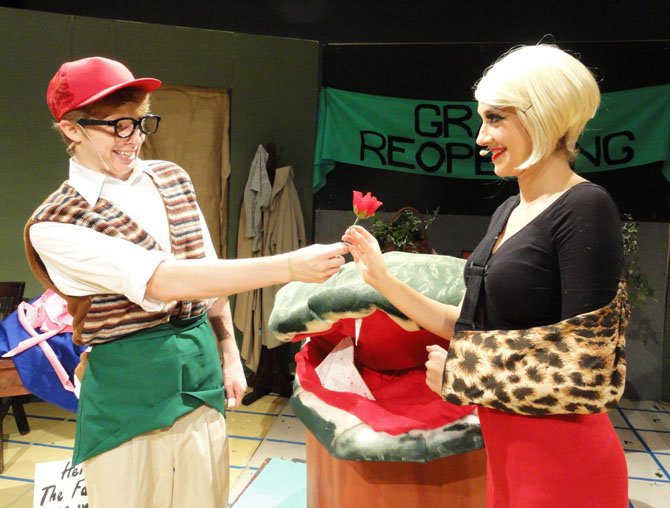 Shy Seymour (Jamie Green) has a crush on Audrey (Katie Rogers), while the ominous plant lurks behind them. Photo by Bonnie Hobbs.

Horror, romance, music – and a hungry, man-eating plant – they’re all in Robinson Secondary’s production of "Little Shop of Horrors." And for Theater Director Chip Rome, this musical’s been a long time coming. "This is a show I’ve wanted to do since I saw it in England in 1984," he said. "I thought it could be great for high school." But various circumstances intervened, so Robinson didn’t do it – until now.

The 21-person cast and crew of 80 have been working hard to make it an unforgettable production. "Having the same stage-management team for three shows in a row makes life easier," Rome said. "And the cast is really talented. Our leads, Jamie and Katie, are a perfect fit for their roles. Jamie oozes a nice, affable innocence and Katie has a solid vulnerability."

Also featured are the Doo Wop Girls – singers who comment on the action. There are three sets of them so more actors can perform. Scenes take place in Mushnik’s Florist Shop, the street outside and in a dentist’s office.

"It’s a really fun horror story," Rome said. "It’s Faustian; it’s about someone who has to choose how much he’s willing to give up to get what he wants – and whether he can make that decision before it’s too late."

Senior Jamie Green plays Mushnik’s employee, Seymour, who’s timid and socially awkward. "He was an orphan and Mushnick took him from the orphanage, but was never kind to him," Green said. "He’s in love with fellow employee Audrey, but is too shy to tell her. One day, a plant in the shop turns his life around. The business grows, everyone’s happy and Audrey likes him, but he has to feed the plant human blood to keep things that way."

Green loves playing Seymour because "he’s so quirky and it’s fun to bring out my inner dork. He’s unintentionally funny and it’s incredible to be able to sing this show’s music."

He said the audience will think of Seymour and Audrey as "2013’s cutest couple" and will like the rock/R & B/jazzy music. Green added, "We have really strong group vocals, plus cool plant puppets."

Portraying Audrey is senior Katie Rogers. "She’s vulnerable and insecure, has an abusive boyfriend and is a doormat," Rogers said. "She knows how to get boys, but her dream is to have a family and be a housewife in the suburbs."

Senior Spencer Boyd plays Audrey’s boyfriend, the dentist. "He’s basically a sadist who lives off other people’s pain," said Boyd. "He’s a terrible human being. He can be smooth and suave, but is really dark and evil and only cares about himself. It’s different from any role I’ve ever done."

Props master and plant constructor is senior Mary Cate Turgeon. "We decided on the show in June, so all summer I was designing the plants," she said.

She appreciates the cast and crew’s help buying and finding the other props needed for this production. "They really stepped up," she said. "We’ve put in a lot of hard work, and it’s going to be a really great show."