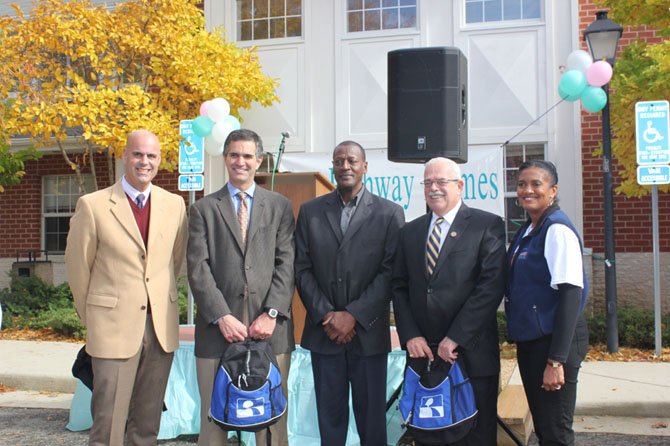 Roger Brown, a Navy veteran, ended up homeless when he lost his job. After sleeping on cots at shelters, "couch surfing," and often spending the night on the street, Brown found his way to Pathway Homes, a non-profit organization that provides housing and support services to over 400 adults with mental illness throughout Fairfax County.

Brown now lives in a Pathways-supported home with five roommates, two of whom are also veterans. The housemates have weekly meetings in which they plan their meals, go over their schedules and talk about their challenges. Brown wants to get his commercial drivers’ license, a car, his own apartment. Brown shared his story with participants of Pathway’s Help the Homeless Community Walk on Friday, Nov. 1. Part of Fannie Mae’s "Help the Homeless" annual walk to raise awareness of the plight of the homeless and raise funds to provide opportunities for those individuals, Pathways has participated in this event for 14 years, raising some $350,000 to directly fund the critical housing needs of people with mental illness.

Nearly 200 people participated in Friday’s walk, despite the threatening weather. Pathways raised $25,000, which will be used to provide support services for its residents.

Although Fairfax County was ranked the third wealthiest county in the United States in 2012 by the Census Bureau, homelessness has been a persistent problem in the area. Current estimates are that there are 1,350 homeless people in Fairfax County, and that almost 40 percent of those individuals suffer from mental illness.

Helped by a growing awareness of the problem and the implementation in 2009 of an official ten-year plan to prevent and end homelessness in county, the number of homeless individuals in Fairfax County has decreased in recent years, and dropped 12 percent last year.

A nationally recognized expert in the mental health and social work fields, Lambert-Woodard said that raising public awareness not only to the plight of the homeless, but to the link between mental illness and homelessness is key to enabling vulnerable individuals to recover and thrive. Congressman Gerry Connolly, who represents Virginia’s 11th District, praised the work of the county in alleviating its homeless numbers, saying that Fairfax County is one of the few jurisdictions in the metropolitan Washington area that has seen its homeless population fall in recent years. But Connolly, one of the keynote speakers at the event, cautioned not to be complacent.

For Roger Brown, finding Pathways and regaining a stable home has turned around his life.