Limitations of election machines prevent electronic scanners from being programmed for recount. 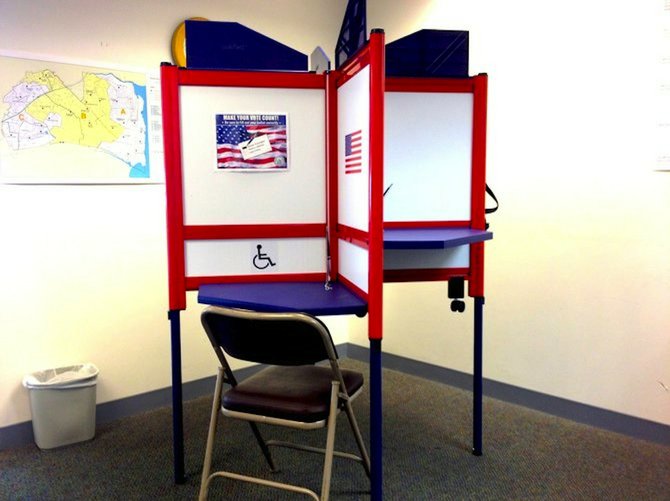 Paper ballots that were filled out in booths like these will have to be hand counted during the recount. Photo by Michael Lee Pope.

Alexandria election officials will be going back to the future in the next few weeks, pouring over thousands of paper ballots by hand as part of a recount effort in the hotly contested race for attorney general. Although other jurisdictions with paper ballots will be reprogramming their scanners for the recount, election officials say the Hart InterCivic machines currently in use in Alexandria and Charlottesville have some key limitations that prevent them from being reprogrammed.

"It's not like that would happen in a split second by feeding them through the machine," said Deputy Registrar Anna Lieder. "So we are prepared to do a hand count if that's what's required."

Election officials say the Hart InterCivic machines have two problems that would lead to a hand recount of all paper ballots. One is that the scanners must be able to conduct a recount for the race in question without also doing a recount for all the other races on the ballot, one of the limitations of the brand purchased by city officials. Another problem is that the scanners must be able to separate ballots where the voter has written in a name and under vote ballots, where no vote was registered for the attorney general race. Election officials say the stack of undervote ballots are likely to include a number of ballots where a voter may have written the name of a candidate or marked it in a way that was not picked up by the electronic scanner.

"All these scanning devices have benefits and drawbacks," said Lieder. "These are much more precise and easier to mark in the initial voting process."

AFTER THE 2005 recount of the race for attorney general between Bob McDonnell and Creigh Deeds, the Virginia General Assembly made some changes that will influence how recounts work in the future. One key difference is how paper ballots are counted. Although Deeds wanted all of the paper ballots to be fed throughout the scanners again, a judge determined that was not called for under the existing code. So paper ballots were only fed through scanners in a few precincts that were challenged. Deeds himself introduced legislation to change that, so now all the paper ballots are required to be sent through the scanners once again.

"I think it's true that most people, when they envision a recount, they think of Florida and holding up ballots looking for hanging chads or counting each individual ballots one by one," says Alexandria registrar Tom Parkins. "That was old technology."

During a recount, though, the scanners must be programmed differently. On Election Day, the scanners only separated overvotes. That meant that if a voter had selected more than one candidate in a race, the scanner would spit it back out while the voter was still at the precinct. So election officials could work with the voter to cast a

ballot that would be logged by the scanner. Overvotes, on the other hand, were not spit back out by the scanners on Election Day. That means that many voters may have thought they cast a ballot for attorney general and walked out of the voting precinct without knowing their vote did not count.

Election officials say a number of scenarios exist where an undervote could be determined to be an actual vote for a candidate. Voters with poor eyesight sometimes mark the ballot outside of the oval. Sometimes voters might circle the name of a candidate, another scenario that would lead to an undervote. In other cases, voters have been known to draw an "X" somewhere on the ballot instead of marking the oval.

"The undervotes are where the action is going to be," said Arlington County Registrar Linda Lindberg. "And we're likely to see a number of undervotes where the intent of the voter is clear, which will change the final tally of the election. What we don't know is whether or not that will be enough to change the outcome of the election."

MANY JURISDICTIONS have electronic machines, similar to ones that were once used in Alexandria. Precinct totals from Election Day will be cross-checked with numbers that were reported to the State Board of Election to make sure they match. That kind of cross-checking was also the extent of a recount for paper ballots until the 2005 recount. Now that the law has changed as a result of that election, more scrutiny will be aimed at paper ballots and the removable storage cartridges that count the votes.

"The cartridges that were used in the election cannot be used in the recount," said Lindberg. "So jurisdictions are talking to their vendors about purchasing additional cartridges or renting cartridges, which is what we are doing."