McLean — The Fairfax County Park Authority presented updates to the McLean Central Park Master Plan Monday, Sept. 23 at the McLean Community Center. The revised draft plan removed a new entrance to the park, but kept plans for a multi-use amphitheater. 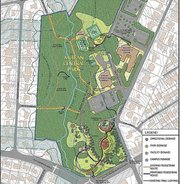 “McLean Central Park is enjoyed by a lot of people of different ages and interests,” said Supervisor John Foust (D-Dranesville). “That made it a difficult job for the Park Authority to work through comments, but they worked hard to make changes in response to community suggestions.”

The park is 28 acres, and located adjacent to Dolley Madison Library and the McLean Community Center. The master plan revision process kicked off last November.

The biggest addition to the plan was for an amphitheater, which would be located on the south end of the park, near Ingleside Avenue. Park staff said they hope the amphitheater can host live performances, as well as be converted into an ice-skating rink and pop-up fountain.

“Ultimately, we have the amphitheater where it was originally placed. The team did a lot of additional studies, looking at different locations to see what other options there were,” said Gayle Hooper, a planner with the Park Authority. “We moved things around to different places in the park, but no matter how we moved it, it would have negative impacts to other park features.”

Hooper said that keeping the gazebo as the only spot for a live performance was not in keeping with the authority’s plans for the park’s future. It is located in a resource-protected area within the park, preventing any expansion or modification.

NEIGHBORS, especially those on Ingleside Avenue and Elm Street, had expressed concerns that having an amphitheater so close to the road would lead to noise disturbances, but Hooper said they would add in a berm (a raised ledge) for sound protection.

“We went out to the park on different occasions and took noise readings at the gazebo and the location of the proposed amphitheater. They’re nearly identical, it’s not quieter in one spot and louder in another,” she said. “So with all things being equal, we can do some berming for sound protection for neighbors and amphitheater guests.”

An element added since the last draft plan are bocce courts and game tables in the central area.

“It’s a location that has shade and is easily accessible, and could be established without affecting any of the existing trees there,” Hooper said.

Several residents were concerned that the plan is too much for the quiet, natural park that they’ve come to know.

“They keep saying that they’ve had great interest in having an amphitheater, skate rink fountain facility there, but I’ve yet to hear a single person, in a public meeting or personal conversation, that thinks those things would improve this park,” said Stanley Muir of McLean. “I’m fine with the bocce court and game tables, but everything else just seems to be a corruption of what this park means to its regular users.”

Others were concerned about more features in the park without a large parking addition.

“They mentioned that performances could bring a few hundred people into the park, where on earth are that many people going to park, especially if it’s during a time when the library is open?” said Sarah Torre of McLean. “Are we going to go from McLean Central Park being a hidden gem to a place with lines to park like Great Falls Park?”

FOUST said that nothing in the plan has been funded, which would likely come from a park bond.