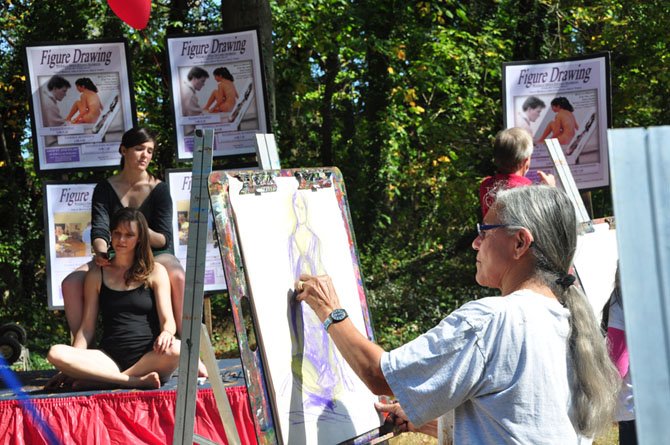 McLean — As a first time visitor to the annual MPAartfest, it didn’t take long for Andrea Dorsey and her sister Beverly to be impressed.

“As soon as we started walking down the path to the park we came across the Children’s Art Walk, and it was just precious,” Andrea Dorsey said. “It was really neat to see the children’s art first, then spend some time with the other artists who are using their talents and experience to create such beauty, and then see the children’s art on the way out. I’d like to think that some of these kids will be featured at this festival and others in the future.” 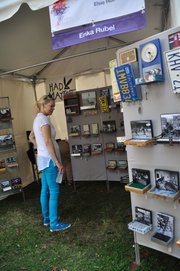 The annual arts event took place Sunday, Oct. 6, bigger and better than ever. This year’s community art tent gave children a chance to paint their own work, touch it up on an easel, and hang it up on a wall with drawn “frames” for all to see.”

“My daughter has done community arts events like this before, where you can create your own picture, but I think she really enjoyed being able to touch it up on an easel and then hang it up and show it off to the family,” said Brenda Ralston of McLean. “It’s little touches like that that make this the best arts event around.”

For artists who wanted a challenge, there were models posing for a figure drawing session throughout the day. Easels, canvasses and a variety of drawing instruments were available for those who wanted to try a sketch.

“I tried my hand at it for about half an hour before realizing I’d better leave the arts to the professionals in the tents,” said Joan Ferrum of Vienna. “But it was fun to try, and I thought the models were very professional staying still for so long, even though they were in the sun while we were in the shade. The other sketchers seemed to do very well though.”

As an early October event, MPAartfest often finds itself at the mercy of unpredictable fall weather. Previous years had seen rain throughout the day, but this year had temperatures in the upper 80s.

“I’d definitely take this weather 100 times out of 100 over any sort of rain, but I’m not used to wearing shorts and sandals outdoors while the leaves are falling,” said Matt Stemmons of McLean. “Then again, sitting on the lawn with some wine and live music at the gazebo brought me back to summer all over again, so it’s nice to have that feeling once again before winter hits.”