'Waltzing to Vienna’ With McLean Orchestra 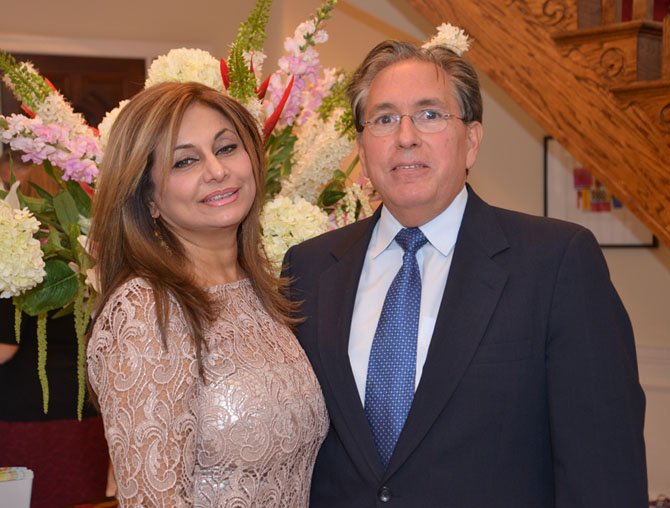 Hosts for the afternoon—Nina Goodarzian and Nicholas Kalis show their support for the McLean Orchestra by welcoming the Gala Announcement Party to their home with plenty of Austrian wines and treats. Photo by Andrea Worker.

“The funds we raise also support the talent of the future and gives our young people some wonderful opportunities for growth and artistic expression.”

The halls came alive with the sound of music—just a slight variation on the famous Von Trapp family story theme—when soprano Melissa Mino sang that song for the sponsors, patrons and friends of the McLean Orchestra on Sunday afternoon. The event, hosted by Nicholas Kalis and his fiancé Nina Goodarzian at their home in McLean, was appropriately titled “Waltzing to Vienna” since the orchestra’s annual gala fundraiser will be held at the Embassy of Austria on April 26, 2014. Emcee, Past President and Advisor to the President of the Board Dr. Wayne Sharp made the formal announcement as guests enjoyed Austrian wines and snacks made by Chef Rachel Brosh of Petite! Catering. 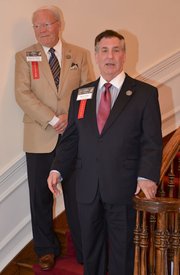 Past President and Advisor to the Board of Trustees Dr. Wayne Sharp and President Paul Frank welcome the gathering and make the formal announcement of this season’s Gala Event—“Waltzing to Vienna.”

Incoming Board President Paul Frank also welcomed the attendees and explained why fundraisers and events such as these are critical to the continued success of the McLean Orchestra. “People ask why we don’t just raise our ticket prices to cover all the costs,” said Frank. “For one thing, we want to keep the music accessible, and even if we sold every seat at every concert we still would only cover about a third of our costs. Running such a renowned orchestra with so much talent costs more than the ticket price.” Frank noted that the organization also includes the Youth Orchestra. “The funds we raise also support the talent of the future and gives our young people some wonderful opportunities for growth and artistic expression.” Judging by the applause and the number of people already signed up to be Orchestra Sponsors in financial categories ranging from $10,000 for Gala Meister Sponsorship to $1,250 for Tritsch Tratsch Polka Sponsorship, Frank was preaching to the choir. 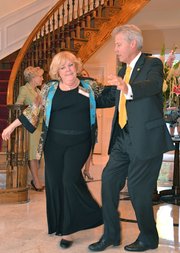 Showing them how all that waltzing is actually done are Past McLean Orchestra President Ann Page and Conrad Heer. Heer will be offering dance lessons just before the gala event, with the proceeds to benefit the orchestra—as well as the partners of those needing a bit more practice before taking to the dance floor.

In case anyone was in danger of forgetting the theme of this year’s gala, Conrad Heer and Past President Ann Page entertained the gathering with two waltzes in the spacious Kalis foyer. Heer also volunteered his expertise to teach the waltz to those who wanted to sharpen their dancing skills before the gala next spring—“For a small fee, of course,” laughed Ms. Page. “Your $75 course fee will be donated to the Orchestra, as will Mr. Heer’s time.” A series of dance classes will be held for three weeks prior to the big bash in April.

Soprano Melissa Mino shares a moment in between performances with the president of the orchestra’s Board of Trustees, Paul Frank.

The McLean Orchestra under the direction of award-winning conductor Maestra Miriam Burns and the Youth Orchestra generally perform at the Oakcrest School in McLean. This year’s concert series is “A Season of Festivity.” For information and tickets, visit their website at www.mclean-orchestra.org, but be prepared to do more than listen to amazing music—this year you may want to bring along your dancing shoes as well.