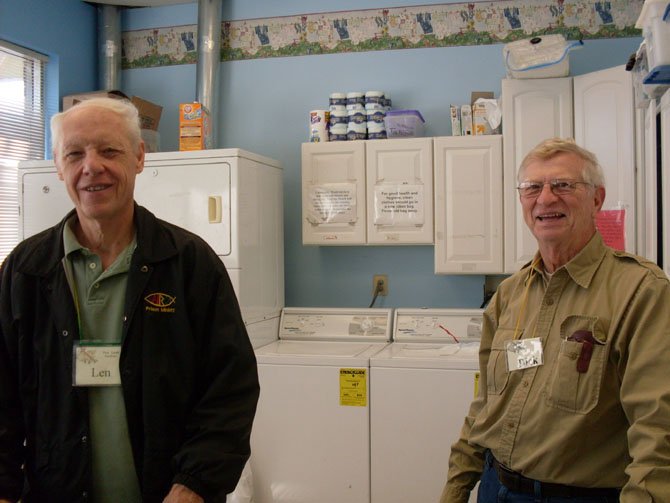 Like so many of us who have similar stories, Walter Joback graduated from college, became an engineer, married and raised a family. However, things changed in 2001 when he became unemployed and health issues defined who he became. Friends said he was a kind and gentle man with a passion for what he believed in. He passed away on Oct. 3 from a stroke and was found in the woods in Fairfax City where he had been sleeping nights. Walter had been a guest at the Lamb Center since 2002. Like Walter, Jeanne O’Neill Pearson, a wife and mother, and Johnny “Noodles” Rossettos also had life-altering events and were guests of the Lamb Center, where they became part of their family. They also passed away recently.

On Friday morning, Oct. 18 at 10:30 a.m., the Lamb Center held a memorial service celebrating the lives of these three people. Leading the memorial service was Dave Larrabee, director of the Lamb Center, and Patti Brown, assistant director, with about 100 people in attendance. A number of attendees spoke in remembrance of Walter. One friend, Jim Swartz, said, “I never heard Walter say a harsh word about anyone!” Larrabee and Brown talked briefly about each one. Larrabee concluded his remarks by saying, “Know that the people that come here are people like you and me” and that “friends are here, then they are gone … but they do leave an imprint.”

The Lamb Center is located at 3220 Old Lee Highway in Fairfax and operates daily from 8 a.m. to 3 p.m., with Friday evening events. People who have driven around Fairfax Circle probably have passed the center many times and not realized that it was there. When walking into the Lamb Center, a sign at the entrance says, “Services are freely given to those who are working to improve their lives.” An average of 100 to 150 people visit the center each day to obtain basic services such as food and laundry, mail service and haircuts, participate in prayer and Bible study; and seek employment and addiction counseling. The center also houses the Fairfax Health and Human Service staff, and Veterans Administration and ex-offender services counselors. According to Larrabee, many of the guests who visit the center during the day are homeless people who live in cars or in the woods.

The center originally started as part of the Truro Church in Fairfax and because of the demand for services, became a separate entity. The Lamb Center has been in its present location since 2000, but is looking for a larger facility as the number of guests who visit the center continues to grow. In addition to Larrabee and Brown, four other staff members and over 100 volunteers support the Lamb Center. Today, this nonprofit 501c3 organization is supported by donations from individuals, businesses and organizations, and about 50 other congregations. Larrabee related a story of a recent donation that illustrates the wide range of donor organizations involved in supporting the center. During the last hot spell, the center had sent out a request for bottled water. In quick response and to everyone’s surprise, the following Monday morning eight Customs and Border Protection officers from the Department of Homeland Security arrived with a truckload of bottled water.

On the day of the memorial service, Ava Neff and Betty Myers, two volunteers, were making breakfast and lunch in a tiny galley while Dick Neff and Len Pomeroy, two other volunteers, staffed the laundry facilities for the guests. Both Larrabee and Brown expressed their passion for what they do, believing that their calling in life is to help others through the Lamb Center. Brown said, “You come here to give, but you get so much more in return.” The center welcomes donations, and according to Larrabee and Brown, now that the winter months are coming, items such as coats, sleeping bags, hand-warmers, socks and underwear are needed. To help or learn more about the Lamb Center, contact Larrabee or Brown by email at lambcenter@thelambcenter.org.