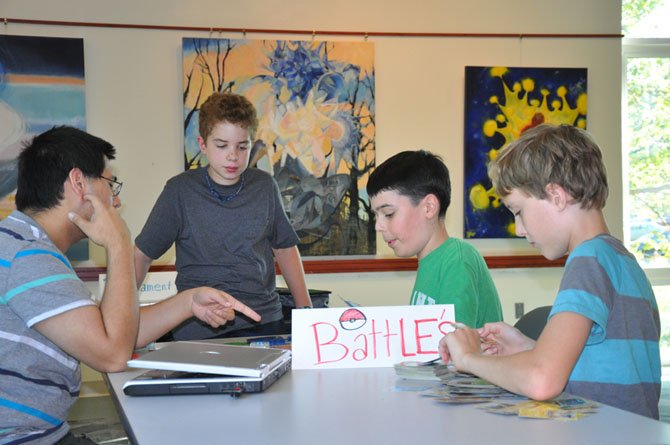 Opportunities for All Ages and Interests

If English is your second language, this conversation group is for you.

Concerns about the strength and condition of “the fabric of our society” abound, but how is that fabric woven in the first instance, and how is it used and enjoyed and rewoven into the modern tapestry of community? Spend just one day (or two) with the librarians, volunteers and patrons of the Fairfax County Public Library in Great Falls and you will see. The library opens its doors on Wednesday at 10 a.m. Because it is the first Wednesday of the month, by 10:30, Children’s Librarian and Youth Services Manager Sharon Harmon is ready for the large roomful of babies and parents who have come from near and far to participate in “Babies and Books,” and music.

Harmon began preparing for her role of introducing reading to children of all age groups and to parents with different interests when she was on staff at the Fairfax City and Reston library branches. With the support and encouragement of her supervisors, Harmon spent two years in graduate school and obtained her master’s in library science. Because the monthly Saturday story time is geared toward toddlers and often more convenient for dads, Harmon’s preparation and selections need to be equally successful at engaging the attention and developing mind of the particular age group, as well as providing the parents with reading material and experiences that they will want to share with their children.

McLean resident and nanny Jenny Chalmer and the infant in her care, Luke (foreground), will be back for Babies & Books (and music) with Children’s Librarian and Youth Services Manager Sharon Harmon (background).

Jenny Chalmer of McLean says, “absolutely,” she will return to Babies and Books story time with her son Luke. Chalmer has frequented the Dolley Madison branch in McLean and the Tysons-Pimmit branch, but this was their first visit to Great Falls. Chalmer “likes that there is another option,” that she was able to discover on the Fairfax County Public Library website. “You can just hit, ‘I am interested in baby things,’” says Chalmer, “and the search engine brings up all events within driving distance.”

AS THE ONE PROFESSIONAL responsible for the Children’s Information Desk and youth services, Harmon is also the resource for community members who have an interest in developing a specific kind of youth service. So, when Great Falls resident and Forestville Elementary School sixth-grader Michael Gatti had the idea to organize a youth services program centered around Pokemon, he went to Harmon. Gatti was familiar with the Pokemon program that Madison High School graduate Timothy Foley had developed at the Patrick Henry library in Vienna when Foley was younger. Now an Oakton resident, Foley continues to give significant time to the Vienna program as an adult leader and, as his work schedule permits, he has taken on the additional commitment of adult volunteer and advisor to Gatti’s program in Great Falls. Foley is assisting Gatti with the application for Pokemon League status so that players can earn rewards and prizes from the Pokemon company which requires that, “Pokemon Leagues must be run in a clean, safe, public location.” In its instructions to community organizers like Gatti, the Pokemon company says, “the most important thing to ask yourself when selecting a league location is ‘will my players feel comfortable playing here?’”

Librarian Steven Weiler, assistant branch manager, experienced in teaching English, encourages area residents to practice speaking English by conversing on topics such as how their grandchildren’s schooling in the U.S. compares to their own schooling in a foreign country.

The community’s comfort level with the public library setting could also be one reason why librarian Steven Weiler, assistant branch manager in Great Falls, was asked by several library patrons to start an English language conversation group at the library. For area residents who, for instance, may be part of an extended family that is multi-lingual in the home, there is a need for a place outside the home where the non-English speaker, perhaps a grandparent, can practice conversing in English. Weiler, who has experience teaching English here and abroad, describes the Wednesday afternoon sessions as, “casual conversation for non-native speakers who are interested in practicing and improving their English skills.” Weiler also facilitates the Book Club for adults that meets one evening a month. A member of that evening Book Club, Barbara Gardner, is also co-leader of the ESL conversation group.

LANGUAGE IS NO BARRIER, however, at Drop-in Chess on Friday afternoons. “Chess is its own conversation, you don’t need to speak,” says Mike Pahner, the Great Falls resident who organized the Chess Club with Weiler’s support. Age is no barrier to participation, either. Weiler explains that, “chess is really a game of skill where age is not a factor in whether you can have a competitive game. The difference with our group is that all ages are welcome.” As school-age children join the adults later in the afternoon, the cross-generational component does provide some teachable moments, whether in game rules and strategy or in chess etiquette. A military man and former corporate executive with USA Today, Pahner says that, “I do require the courtesy of introducing yourself, shaking hands and looking each other in the eye.”

By the time the library closes its doors for the day, the librarians, volunteers and patrons have interlaced a few more threads in the community fabric of Great Falls.