Board of Supervisors hopes project will serve as revitalization catalyst. 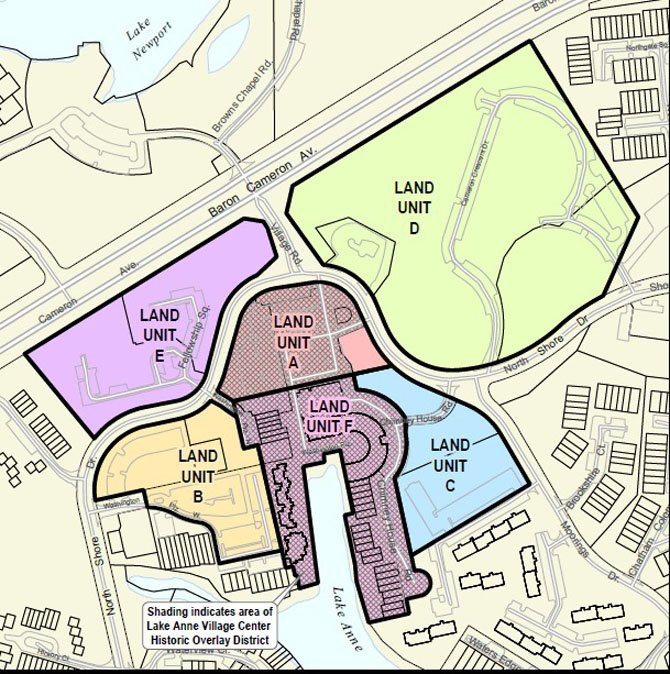 The various land units surrounding Lake Anne. The Fairfax County Board of Supervisors recently approved an interim agreement with a developer for Land Unit D and A. Photo Contributed

Reston — The Fairfax County Board of Supervisors approved an interim agreement for the redevelopment of the Crescent Apartments, which are located in the Lake Anne Commercial Revitalization District. The 16.5-acre site contains 181 affordable housing units.

The county purchased the site in February 2006. “This purchase was part of the county’s efforts to preserve affordable housing and to encourage and guide revitalization at the Lake Anne Village Center,” said Supervisor Cathy Hudgins (D-Hunter Mill), at the board’s Sept. 10 meeting. 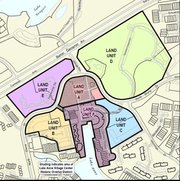 The various land units surrounding Lake Anne. The Fairfax County Board of Supervisors recently approved an interim agreement with a developer for Land Unit D and A.

THERE WERE SEVERAL OPTIONS given for possible redevelopment. Hudgins said the preferred option would consolidate three parcels of land just north of the plaza itself, known as Land Units A, D and E.

In recent years Fairfax County staff requested another amendment that would allow for a plan that would consolidate Units A and D only.

The county advertised a request for development proposals in 2012. According to Hudgins, the county sought proposals that would address “the preservation of affordable housing, the creation of additional workforce housing and development that could serve as catalyst for revitalization of the village center.”

Eight proposals were received, with the one from Lake Anne Development Partners LLC being chosen.

“Their proposal best demonstrates the ability and capacity to meet the county’s needs as identified in the RFP,” Hudgins said.

The interim agreement will allow Lake Anne Development Partners to file necessary applications for zoning and land use approvals prior to a final master development agreement. It requires a re-alignment of Village Drive and the maintaining of the 181 affordable housing units as part of first phase, as well as a relocation plan for residents, which must be approved by county.

The plan can include an option for current residents at time of redevelopment to live there during the project life at affordable rates, provided eligibility requirements are met.

THE AGREEMENT also states that the county is not obligated to contribute financially to redevelopment.

“We had quite a few people come out to the public hearing [July 30],” Hudgins said. “I think this is what they’ve been waiting for, this means they will be hearing from the applicant now and we will be meeting with Crescent Apartment residents to discuss details on what the potential development will be.”

Hudgins said the plan presented by Lake Anne Development Partners strikes the balance the county was seeking between preserving affordable housing and serve as a catalyst for revitalization.

Board of Supervisors Chair Sharon Bulova said this agreement is a strong step toward preserving the spirit with which Reston was founded.

“Lake Anne and the Reston Community was a pioneer when it comes to planned communities,” she said. “I’m pleased to support this revitalization effort that will allow for Lake Anne and Reston to continue to be the attractive, exciting and vital place it is.”