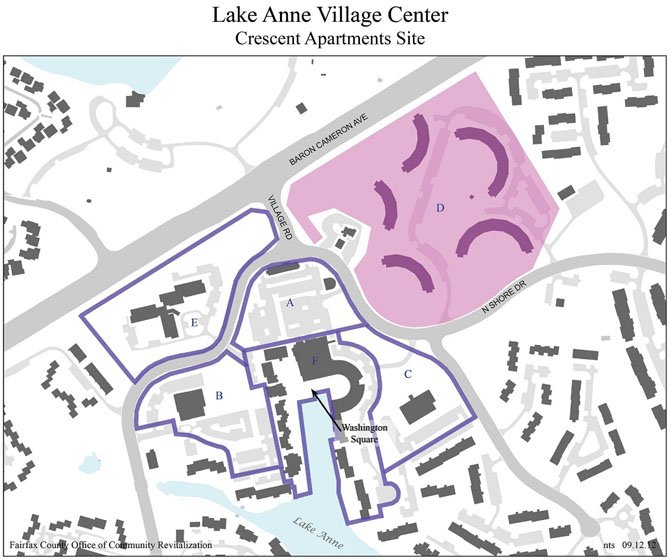 The Fairfax County Board of Supervisors hosted a pubic hearing Tuesday, July 30 on the redevelopment of the Crescent Apartments, located adjacent to Lake Anne.

The 16-acre property currently features 181 affordable housing units. The county purchased the apartments in 2006 for $49.5 million with the goal of preserving affordable housing, and to assist in the revitalization efforts of Lake Anne.

In 2009, the county added a Comprehensive Plan Amendment that allowed for up to 935 dwelling units to be built.

The county issued a request for proposals in February 2012, and received eight responses.

“One of the primary requirements of anyone that responded to RFP was the retention of 181 affordable units,” said Barbara Byron of the county‘s Office for Community Revitalization and Reinvestment. “In addition to that, the RFP required that the rest of the units provide 20 percent of the total as affordable dwelling units.”

LAKE ANNE DEVELOPMENT PARTNERS, a subsidiary of Republic Land Development, was selected by the county in early July.

“They are required to submit detailed relocation plan for how the 181 residents will be moved to new development within Crescent property,” Byron said. “They will have to do that to our approval, and will be required to do that in the first phase of development.”

Many of the current residents are concerned about the proposal, fearing that any relocation will be detrimental to their way of life. Herminda Belleza, who has lived at the Crescent Apartments for 12 years, is concerned about the effect a move would have on her daughter, who just graduated from Forest Edge Elementary School.

“I am very worried about the Crescent redevelopment plan. If my family is forced to move from Crescent, this will disrupt my daughter’s education plans,” she said. “We have built our life at Crescent around good schools and closeness to my job. I would be unable to afford a more expensive apartment in Reston.”

Pat Hynes, the Hunter Mill representative for the Fairfax County School Board, said she supports the aspects of the agreement that provides for more affordable housing, saying it is a “fundamental tenet” of education and learning for those who need it the most.

“Families without stable, reliable housing move often, a factor we describe as ‘student mobility,’ and when we look at gaps in student achievement and on-time graduation, mobility is always found to be a powerful risk factor,” she said. According to a 2010 report of the National Academy of Sciences, more than two moves during elementary school greatly exacerbates other risk factors for student achievement, significantly lowering success in math and reading and increasing likelihood of repeating grades and eventually dropping out, and the more moves, the worse it gets.”

Stephen Smith-Cobbs, a pastor and member of Virginians Organized for Interfaith Community Engagement (VOICE), spoke at the hearing. VOICE is an advocacy group for those in need, and Smith-Cobbs said he applauded the county’s commitment to affordable housing.

“Our primary concern is for every effort to be made in this process to accommodate as many of the current residents as possible after the apartments are redeveloped,” he said.

Reston founder Bob Simon said that he has been trying to have more affordable housing back to the construction of Lake Anne, and even as recently as several years ago.

“This project from my point of view, is the answer to a dream,” he said. “The reason I’m really excited is because we have an extraordinary developer in Republic. What’s extraordinary is that they’re interested not only in their bottom line, but in working with the community.”

THE BOARD OF SUPERVISORS will make their final decision on the interim agreement at their Sept. 10 meeting. “This agreement sets the stage for future negotiations,” Byron said. “If approved, it does not bind the board to further actions, it’s just a stepping stone that allows [Lake Anne Development Partners] to file rezoning applications.”

Byron also pointed out that the zoning and permitting process that would take place after the agreement is approved, would mean it would be another three years before any kind of ground is broken.