Keeping up with Neal Gillen
Votes

Keeping up with Neal Gillen 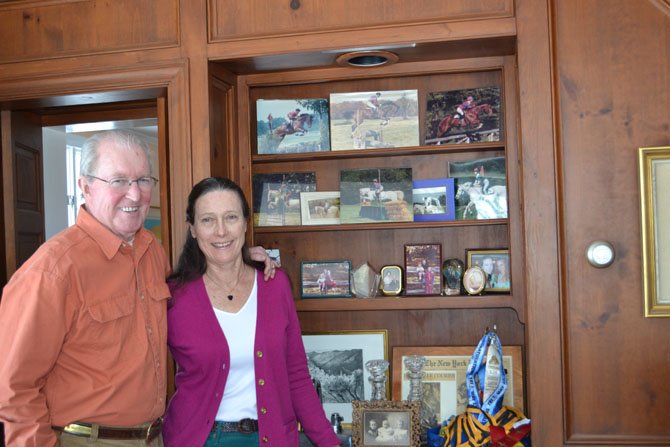 Neal Gillen, pictured with his wife Mary-Margaret, has a home office filled with awards, political memorabilia, biographies and his current work-in-progress. Photo by Marilyn Campbell.

The fog was thick in San Francisco as waves crashed against the rocks in the Pacific Ocean. It was a cold morning and 73-year-old Neal Gillen found himself fighting against the current, gulps of salt water burning his mouth. Far from his Potomac home, he was heading for Alcatraz.

As he forged through the two-foot swells in the water’s 55-degree temperatures, Gillen knew he was in one of the most difficult swims of his life. He was competing in the Orca Alcatraz Challenge Aquathlon & Swim, a 1.5 mile race in the San Francisco Bay.

Gripped by pain in his legs and lower back, Gillen found the mental strength to keep going by focusing on Mary-Margaret Gillen, his wife of 50 years, and their daughters Lauren, of Washington, D.C., and Donnelly, of Oakland, Calif.

During that race, the currents around Alcatraz were the most ferocious in the swim’s history. Gillen fought his way to the finish, and when he finally he felt the grit of the sandy shore on his fingertips, he knew he’d made it. In fact, he medaled: Gillen finished first in his age group and was the oldest swimmer to finish the race.

"I was exhausted, disoriented and thirsty," he later wrote of the event. "I tried to smile as I listened to the shouts of congratulations, but what I needed was something to hold onto so that I could steady myself."

For Gillen, the desire to to such a swim is not out of the ordinary. "I’ve always been a dare-devil, even as a kid," he said. "If there was a challenge, I’d take it."

Even his friends thought the Alcatraz swim was too much.

"He said to me, ‘Well Tyler, I’m getting ready to swim Alcatraz,’" said Potomac resident Tyler Abell, who has known Gillen since they worked together during the 1960s in the Lyndon Johnson Administration. "I said, ‘That’s crazy. No one has ever swum from Alcatraz to the mainland.’ But he did it. I think Neal is one of the most energetic guys I know. It’s amazing the things he does."

Gillen has completed the Alcatraz swim four times, and he plans to compete again this year, this time swimming with his daughter Donnelly.

Such hard work to maintain his physical well-being has paid off. Dressed in a crisp orange shirt, pressed khaki pants and hiking shoes, Gillen’s fit appearance belies his 76 years.

GILLEN GREW UP in a large Irish Catholic family in Queens, New York, which he credits in part for his drive and predilection for competition.

"I grew up in a house with four Type A women. Even getting to use the bathroom first in my house took determination," he said of his family, which included his parents, three sisters and one brother. "I get my determination and drive from my mother, who was a very strong woman."

In addition, "there were a lot of kids" in his apartment complex, "and there was always an opportunity for competition. As kids, everyone was vying for attention, whether it was playing marbles or basketball."

Gillen graduated with honors from New York University in 1961 and earned his law degree in 1964 from the Georgetown University Law Center. Then he worked on the White House Presidential Advance team for the Lyndon Johnson Administration and served in the U.S. Navy as a member of the Naval Security Group.

Gillen then spent 43 years representing the American Cotton Shippers Association and its federated associations, eventually retiring in 2008 as executive vice president and general counsel. He is currently in private practice and represents a major New York commodity investment firm.

Gillen has found time to write eight novels based on his experiences: "Sugar Time," "Capitol Punishment," "Dinner in Bordeaux," "Kitty’s Rules," "Slamming the Close," "The Night Clerks," "Altar Boy" and "Lonely No More." He has also written a memoir, "1954 Adventures in New York," in addition to numerous magazine articles and short stories. He is currently writing a series of short stories titled "Moments of Truth."

Gillen is a member of the board of The Writer’s Center in Bethesda and its former vice chairman, and the former secretary of the American Independent Writers.

"I read a lot," said Gillen. "When it came to writing novels, I decided that I could do it. Even though I wrote a lot on trade policy and issues as a lawyer, I grew up with in a family that liked to talk. I was always listening to storytelling. Dialogue in a novel was never a problem for me."

Piatigorsky says that Gillen is steadfast when it comes to setting and reaching goals. "He has a lot of determination. He is very sincere in what he does. He is a person who sets his sights on what he wants to do. … When things don’t go the way he wants them to go, he has a way of keeping focused, not getting hysterical and faltering. He’s a very steady person. I have a lot of respect for him."

Gillen’s gentle nature shows when his English springer spaniel, Squire, and cocker spaniel, Brodie, race into his living room, jump on the sofa next to him and lick his face.

"You know you shouldn’t be up here," he tells them. Squire snuggles in his lap, taking in Gillen’s gentle stroking.

Gillen, a 42-year Potomac resident, has been active in community civic affairs. He was a member of the Western Regional Advisory Committee, President of the West Montgomery County Citizens Association, Chairman of the Avenel Equestrian Center Council, the board of the Seneca Valley Pony Club, and as a co-founder of Fairness In Taxation, which succeeded in the passage of a referendum capping Montgomery County property taxes.

GILLEN’S WIFE, MARY-MARGARET, who he affectionately refers to as Mimi, has been an unwavering supporter and one of his biggest fans.

"Neal is very driven," said Mary-Margaret, who is also an attorney. "If he has a project, he completes it before it’s due. I’m impressed with the way he commits time and effort to accomplishing what he wants to do."

She is also one of his advisors. "I’m critical of his writing," she said. "I will make writing suggestions, but I never look to see if he’s adopted them."

The two met when Gillen was in law school and Mary-Margaret was in college. It was love at first sight. "I knew when I saw her that she was the person I’d marry," he said. "It was her willowy shape and blue eyes. She is brilliant, but also kind and considerate."

His youngest daughter, Donnelly, an attorney in Oakland, Calif., points out that in spite of his high-powered career and personal ambition, Gillen has always been passionately committed to his family.

"He has always been a devoted father," said Donnelly, who has swum with her dad in the Alcatraz aquathlon. "Both my parents were. They had demanding jobs, but were still able to give us so much time driving us to practices and helping us with our homework." He was even her first basketball coach.

Dozens of family photos and an array of brightly colored ribbons fill the bookshelves in Gillen’s light-filled family room. Each ribbon represents the family’s equestrian success, another passion for which Donnelly credits her father.

Most important, said Donnelly, are the character traits the Gillens modeled for her and her sister, also an attorney. "My dad, and my mom as well, taught us to always put our best effort forward and keep working at something," said Donnelly. "They always stressed that honesty, integrity and loyalty are the best qualities to have."

Gillen shows no signs of slowing down. His desk is covered with work in progress and a side table in his office is overflowing with stacks of paper. The bookshelves hold legal tomes, current historical novels and biographies.

"A lot of people his age would take a more relaxed approach towards sports and writing," said Donnelly. "I forget how old my parents are a lot of the time because there are so active. … He is always someone who is going to keep his brain moving