In its role as an emergency placement partner for the Humane Society of the United States, the Animal Welfare League of Alexandria added 10 dogs and four rabbits to the shelter on Wednesday, March 26. The dogs and rabbits were rescued from a suspected puppy mill in Arkansas in late February; 121 dogs and 60 other animals were rescued after the Jefferson County Sheriff's Office called in the Humane Society of the United States and other area organizations, including Central Arkansas Rescue Efforts for Animals, The Humane Society of Saline County, Out of the Woods, RedRover and Sallis Ranch Large Animal Rescue, Inc. for assistance.

The Humane Society of Saline County and Central Arkansas Rescue Efforts for Animals took in 67 of the dogs. The eight exotic birds were transferred to The Gabriel Foundation. The remaining dogs, nine bunnies and three cockatiels have been transported to various emergency placement partners in the Washington, D.C. area, including Animal Welfare League of Arlington, Animal Welfare League of Alexandria, the Humane Society of Calvert County, Lost Dog and Cat Rescue Foundation, Washington Animal Rescue League and Washington Humane Society, where they will be available for adoption.

All of the dogs from the Arkansas rescue at the Vola Lawson Animal Shelter will be available on Thursday, April 10. People who are interested in adopting any of these dogs should visit the AWLA shelter at 4101 Eisenhower Ave. AWLA will be posting more photos/descriptions of the dogs on its facebook page and website, www.alexandriaanimals.org. 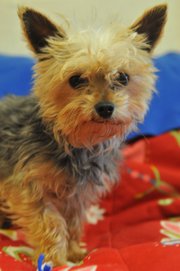