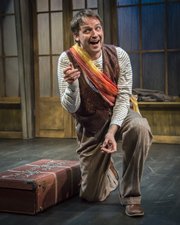 Marcus Kyd stars in “The Thousandth Night” at Metro Stage through May 18.

MetroStage is presenting the one-man-show, “The Thousandth Night” now through May 18. The play stars Marcus Kyd as a quick-thinking comic actor in a traveling company of players who are stuck in Paris during the occupation of France. He is facing his deportation for “propagating subversive material,” so in his last effort to save his life, he performs his show for the last people (the audience) who may have his fate in their hands.

“Guy tells the gendarmes a series of stories, to be sure, but his own story is the backbone of the entire play,” said Kyd who plays 36 different characters using various hats and scarves from his trunk.

John Vreeke, the director, said Guy's company of actors perform a specific 1942 ironic satiric slant to the language of the “Arabian Nights” stories in order to entertain their audiences at a cafe. “Guy attempts to demonstrate how these stories really are innocent and not subversive as the SS accuses,” he said.

“As he pleads for his life, he describes his own complicit behavior and finally evolves his own moral center,” said Vreeke.

Playwright Carol Wolf, who wrote the play in 1992, has written 40 plays in 30 productions on five continents. She said after several years of research on the Nazi occupation of Europe for an earlier play, the experience left her fascinated by how people responded to being under occupation by a foreign army.

“In a play, the playwright subjects the characters to extraordinary pressures over a period of time, to see what happens to them,” she said. “It is like designing an alchemical experiment, where the play dictates the vessel, the heat, and the pressure. The audience follows along on that ride through their empathy with the characters.”

Kyd said the biggest challenge for an actor is to make the bigger story clear: “There are little plays within the play, which also must be clear.”

Vreeke said since the audience has a large role in this play as the French police who do not have the means or the will to help Guy escape, “the audience will get a stronger sense of what it meant to live in that horrible time and place.”

When the unsolicited script arrived on her desk 20 years ago, producer Carolyn Griffin knew it was the perfect play for MetroStage. “It involves the audience as characters in the play, which works so well in an intimate space, fully engaging them with humor, increasingly with a hint of sarcasm and ultimately shocking them out of their reverie when the reality of the situation asserts itself,” said Griffin.

She added that “The Thousandth Night” is everything you want a theatrical event to accomplish: to engage, entertain, and finally, touch the audience on an emotional, unforgettable level — “that is the potential of The Thousandth Night.”

Kyd hopes the audience will leave more curious about the world and about themselves: “There are many questions in here about how we choose to live our lives, about love and loss, and anger, and forgiveness. It is a marvelous microcosm for human souls.”

MetroStage is presenting “The Thousandth Night” now through May 18. Tickets are $50. Show times are Thursdays at 8 p.m.; Sundays at 7 p.m. “Underneath the Lintel” is currently showing on the same stage on Fridays and Saturdays at 8 p.m.; matinees on Saturdays and Sundays at 3 p.m. MetroStage is at 1201 N. Royal Street, Alexandria, VA 22314. Call 703-548-9044. Visit www.metrostage.org.