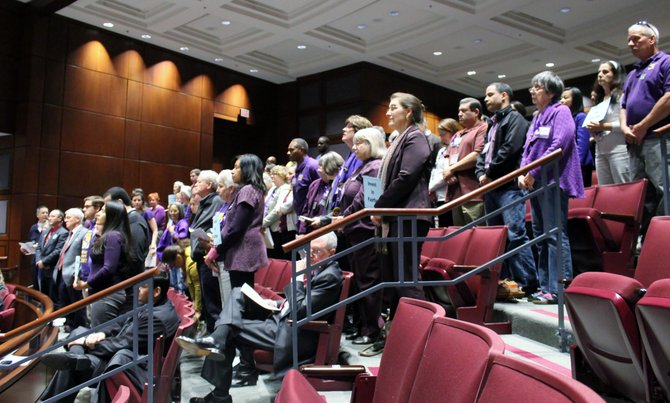 The public hearings on the Fairfax County budget drew a large crowd each day. Here, a group of community members advocate for school funding. Photo by Janelle Germanos.

Of the 487 students admitted to the Thomas Jefferson High School for Science and Technology, only 10 are black. Eight of these students are Hispanic.

This is even though 177 black students and 214 Hispanic students applied for admission to the school.

“Unless you actually believe that black and Latino children have some type of intellectual deficiency that prevents them from competing for admission to TJ, you have to believe there is a failure in the Fairfax County Public School system in terms of preparing these students to adequately compete for admission to TJ,” said Tina Hone, former school board member and founder of the Coalition of the Silence (COTS), at the FY 2015 budget public hearing on April 8.

COALITION OF THE SILENCE, an organization that advocates for the needs of minority students, is behind the 2012 complaint to the United States Department of Education that Thomas Jefferson discriminates against minority and poor students.

Admissions to Thomas Jefferson are disproportionate to the number of kids in Fairfax County who ought to be in the school, Hone said at the hearing.

Cuts to summer school and needs-based staffing, Hone said, are detrimental to minority and poor students.

“If you really care about closing the achievement gap, you’ve got to have summer school. For COTS kids, it is the mechanism that prevents the loss of learning that is then reflected in the next school year,” Hone said.

More time in school, including the restoration of full-day Mondays and a modified calendar, is what COTS kids need in order to close the achievement gap.

“The more time COTS kids are in school, the more you will see a closing of the achievement gap and the development of a student body that can successfully compete for admission to Thomas Jefferson High School,” Hone said. 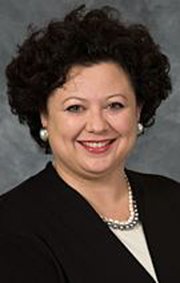 COTS founder Tina Hone spoke about the achievement gap in Fairfax County at the budget hearings in Fairfax on April 8.

Alex Glassman, a self-described COTS student who is in seventh grade at Longfellow Middle School, said at the public hearing on the budget on April 8 that later start times for middle and high school students would also help to close the achievement gap.

“If you are serious about closing the achievement gap, you must support later start times for middle and high schools. Without doing so, you put us in a spiral destined to fail. You widen the gap further and further,” Glassman said.

Ameen Al-dalli, a tenth grader at Langley High School, agreed that it is difficult to pay attention in class because he is so tired.

“My lack of sleep has a direct toll on my education and athletics,” Al-dalli said at the public hearing.

Board of Supervisors Chairman Sharon Bulova said at the April 8 hearing that the board has gone on record supporting SLEEP.

THOMAS JEFFERSON has said in the past that they do reach out to minority students interested in attending the school.

Ilryong Moon, the chairman of the Fairfax County School Board, cited the disparity in graduation rates for minority students and an increase in ESOL services for the school system in general at the budget public hearing on April 9.

Lee District School Board member and Vice Chairman Tamara Derenak Kaufax spoke to language and literacy issues, as well as the effect poverty rates are having on the school system.

“Fairfax is one of the wealthiest counties in the United States; that is a fact. But there are lesser known truths that we see in our schools, including many of those that I represent in Lee District, that lie in contradiction to this fact,” Kaufax said.

According to Kaufax, 20 of the 32 schools in the Lee District, have poverty rates of 40 percent or higher.