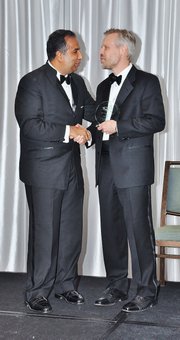 Good Shepherd Housing & Family Services celebrated 40 years of delivering continuous community service and promoting self-sufficiency to those in need in Fairfax County with a fundraising gala at the Westin Hotel in Alexandria on Saturday, April 12.

The fundraiser included a silent auction where patrons could bid on items donated from McCormick & Schmick, Capital Grille, Bodnar Chiropractic Center, Sugar House Day Spa, and others. GSH’s Board Chair Sanjiv Mahan welcomed those in attendance and presented two long-time organization leaders Beatrice Dobie and Shannon Steene with the Joseph T. Adinaro Humanitarian Award for their leadership and longevity to the organization. The honor for Dobie was posthumously awarded for her contributions to the establishment since its inception 40 years ago. John Horn, the gala chair, performed the invocation for the evening.

A live auction performed by John Murray followed. He spurred the crowd to bid record amounts and used comedic props to help make the auction a success. The crowd enjoyed it as he switched from Disney Mickey Mouse ears during the Disney Vacation package to a Washington Nationals hat to encourage bidding for the sports package auction item. Many attendees also bid at different donation levels for the Kid-to-Camp program sponsored by GSH. As Executive Director David Levine said, these donations will help youngsters “realize their dreams.”

Levin also introduced a video which featured success stories of individuals who had been helped by the program. The evening ended with a DJ and dance portion as the dance floor quickly filled up once the music started. Good Shepherd Housing broke its gala record by raising a record $272,000 that evening.