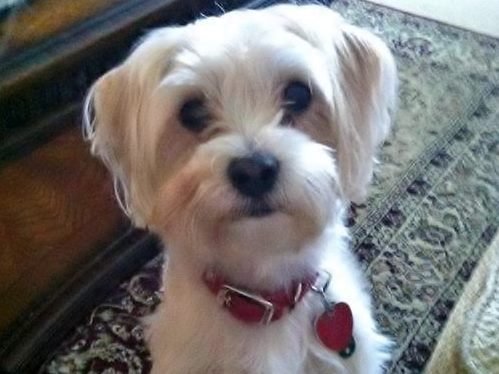 Oscar, a nine-pound Morkie terrier, died in early April after being attacked by a pit bull. Photo Contributed

In Fairfax County, no dog is considered dangerous simply because of their breed.

In fact, any dog, regardless of breed, isn’t considered dangerous until it has bitten, attacked, injured, or killed another animal.

Springfield resident John Whalen thinks that should change. When his daughter was visiting in early April, a neighbor’s loose pit bull attacked and killed Oscar, a nine-pound Morkie terrier. While the pit bull that killed Oscar was euthanized, Whalen is worried about the owner’s other pit bull and prevalence of other pit bulls in the neighborhood.

“There are many other jurisdictions in the U.S. that have a ban on pit bulls. But in Fairfax County, it’s done on a case by case basis. There has to be an incident first,” he said. “It’s tragic for both the victim’s owners and the killer dog’s owners, because both pets are going to be lost.”

More and more localities have moved towards lifting bans on specific breeds. In early April, Maryland Governor Martin O’Malley signed a bill which undoes a ruling that pit bulls are inherently dangerous.

And in Fairfax County, recent changes in rules have made it easier to adopt a pit bull from the animal shelter.

PREVIOUSLY, those interested in adopting a pit bull from the Fairfax County Animal Shelter had to meet certain requirements. For example, potential owners had to be 25 years or older, own a home, allow a home visit, pass a background check, and take their dog to training classes.

All of these restrictions were removed in February 2014, making the rules for adopting pit bulls the same as adopting any other canine breed.

“Because of the policy, countless potential adopters were turned away because they were not old enough to adopt or did not own a home. In addition, many adoptions fell through because adopters did not want to wait the days and sometimes weeks it took to complete a pit bull dog adoption. Finally, the policy enforced the incorrect idea, based on media hype, that there is something different or ‘wrong’ about pit bull type dogs,” the Fairfax County Animal Shelter announced in their February 2014 newsletter.

Several national organizations are opposed to breed-specific bans, including the American Veterinary Association, Centers for Disease Control and Prevention, the United States Department of Justice, among others.

A 2012 American Veterinary Medical Association study concluded that “While some study authors suggest limiting ownership of specific breeds might reduce injuries (e.g., pit bull type, German Shepherd Dog) it has not been demonstrated that breed-specific bans affect the rate or severity of bite injuries occurring in the community.”

In December 2013, the AVMA released a study demonstrating that a dog’s breed doesn’t determine whether it is more likely to bite. Spaying or neutering a dog and keeping it as a family pet, rather than in isolation, decreases the likelihood of dog bites.

In Maryland’s Prince George’s County, where breed-specific laws were in place, a 2003 study conducted by the county concluded that public safety did not improve because of the ban and that “there is no transgression committed by owner or animal that is not covered by another, non-breed specific portion of the Animal Control Code (i.e., vicious animal, nuisance animal, leash laws).”

And the National Animal Control Association has stated that “Dangerous and/or vicious animals should be labeled as such as a result of their actions or behavior and not because of their breed."

According to the ASPCA, pit bulls are dogs that have been bred to fight with other dogs. The ASPCA advises that pit bulls should not be left alone with other animals.

In Fairfax County, there are 35 dogs listed as dangerous on the Virginia Department of Agriculture and Consumer Service’s Dangerous Dog Registry. Residents can view the address and names of both the dog and its owner.

THERE ARE A COUPLE OWNERS who have two or more dangerous dogs recorded on the site. In one case, a single owner’s three dogs, all lab and pit bull mixes, “attacked and repeatedly bit a child while running unrestricted.”

There is currently a lawsuit pending against the owners of the pit bull who attacked Oscar for Whalen’s daughter’s trauma and emotional damage, so the owners could not be reached for comment.

Fairfax County laws require that dogs be on a leash. Leash laws may help, but Whalen says he still thinks a pit bull ban is necessary.

“I don’t have anything against any breed of dog, but I don’t think there’s a place for them in an area with kids. What would have happened if there was a little kid there?” Whalen asked.

As more and more jurisdictions move away from breed-specific bans, it remains likely that incidents will still be treated on a case-by-case basis.