Night Out in ‘Pleasantville’
Votes

Night Out in ‘Pleasantville’ 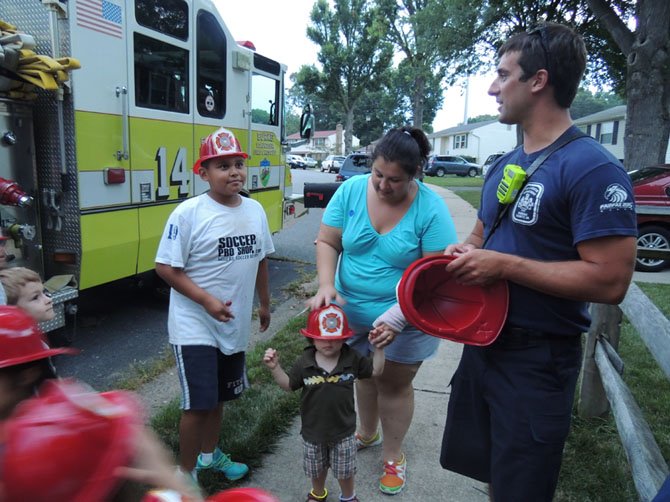 Firefighter Happ Radam of Engine 14 in Burke talks with Jack Sejas, 11, about fire safety. Radam handed out hats to all the kids before they climbed into the engine to discover what was inside. Photos by Phoebe McPherson/The Connection 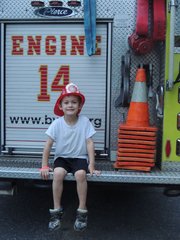 Thomas Mylonas, 4, sits on the back of Engine 14 at Cardinal Estates, excited for the chance to see firefighters and a fire truck and real life. "God bless the people who do this," Jessica Mylonas, his mom, said.

The Fairfax County Police and Fire Department visited over 193 residential areas on Tuesday night, Aug. 5, to celebrate the annual National Night Out.

“These have been kind of held hand-in-hand with the neighborhood watches,” Supervisor Pat Herrity (R- Springfield) said.

What began over 30 years ago as a night for community members to simply leave a porch light on in awareness of crime prevention have spread and built into a night of promoting relationships between law-enforcement and improving community safety skill sets.

For the past four years, Orange Hunt Estates has held a sizable event thanks to Neighborhood Watch Coordinator, Kelly Jacewitz. “I took over in 2011,” she said.

Their event, hosted for a second year at Orange Hunt Elementary School, expected 150 or more people to come out and get involved. Events included balloon animals, a moon bounce, food truck, ice cream truck and of course, the fire engine and ambulance.

“It’s great, very enthusiastic. We all know everyone,” Martique Vargo, of Burke said. That’s the point of the National Night Out, according to Jacewitz, and it seems to have worked.

“The point is to get your neighborhood out. Meeting people face to face, saying hi,” she said.

“I’m here because I represent the area. It [Orange Hunt Estates] is very active,” he said. “Wherever there’s neighborhood watch, there has been reduced crime.”

Siblings Daniel Rios, 9, Kayla Rios, 5, and friends Antigoni Symon, 5, sit together before the start of ‘Madagascar.’ Cardinal Estates has been showing a movie as their annual event for a decade or more.

NATIONAL NIGHT OUT was founded in 1981, an organization introduced by Town Watch in the United States. They held their first event three years later, and now after more than 30 more, it involves more than 37 million people in both the United States and Canada.

For Herrity, the night began with the annual photo with McGruff the Crime Dog and the Fairfax Police, West Springfield District Station. From there, he made his way to several different locations, introducing himself to community members.

“It’s a reason to come out of the house and meet with the public safety officials,” he said. “I’m out there listening to my constituents as well.”

At Cardinal Estates he spent time handing out lollipops before making a brief speech.

“It’s neighborhoods like this that make Fairfax County great,” he said.

Cardinal Estates held a movie, as it has for the past decade. “At least the last 10 years, it might be 15,” Neighborhood Watch Captain of Cardinal Estates, Amanda Fox, said.

“Those that want to come participate, they get a little bit more active.”

This year, Fox handed out Cardinal Estates flashlights for community members to use while walking after dusk.

“We try to do things to get people active in the neighborhood,” she said.

Their neighborhood is smaller compared to Orange Hunt. Ranjit Varma, 62, has lived there for decades. He sat at a picnic table coloring a fire engine and drinking Coca-Cola. “Since ’89,” he said chuckling. His family members surrounded him, some on the grass, some waving hello. “This is the time to connect, basically, get to know your neighbors.”

He introduces himself to the new faces, the new families, when he sees them. “You know, get to know each other.”

Daniel Rios, 9, is a community member with Varma. He enjoys watching the movies year after year. But also understands that there is also a deeper meaning to these annual events.

“To know what to do in emergencies,” he said. 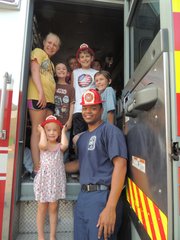 Younger sister, Kayla Rios, 5, is just proud that she is not afraid of the police or firefighters.

“One year, we saw an ambulance,” she said, her eyes wide. “We saw everything. There was nothing scary inside.”

She was quickly up out of her princess lawn chair when Fox announced that the fire engine arrived.

ROOKIE FIREFIGHTER Happ Radam from Engine 14 has been with Fairfax County Fire Department for less than a year. This is his first National Night Out.

“I think it’s something good [for communities],” he said. “It’s the first time I’ve seen something like this.”

Back at Orange Hunt, 5-year-old Tytus Jacewitz seemed to have grasped the concept of the police. “They catch robbers,” he said, a sticker reading “junior officer” firmly planted on his shirt. “They’re not scary, I love them.”

National Night Out is held each year on the first Tuesday of August throughout the United States and Canada.