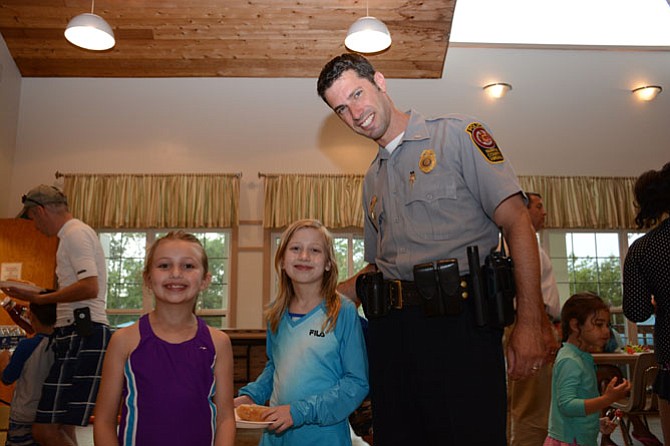 (From left) Katelyn and Elizabeth Stuebner meet with Lt. Eli Cory, assistant commander of the West Springfield district police station, before adding condiments to their hot dogs during National Night Out in Little Rocky Run. Photo by Tim Peterson.

Fairfax Station residents Janet and Michael Jacobs enjoy barbeque and community socializing as part of the National Night Out. 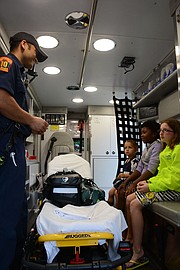 A well-known tunnel-bridge on Colchester Road connects an area of Fairfax Station with the rest of the county, both geographically and mythically. Its link to historic reports of a vandal in a bunny costume has gotten it plenty of attention, including actual acts of vandalism on and around the structure.

“We call [the police] all the time because of the bridge,” said Fairfax Station resident Janet Jacobs. “It’s a magnet for teenagers.”

And though neighbors are familiar with their law enforcement professionals in that setting, they also enjoy the opportunity to interact with them and other neighbors when not discussing any tunnel-related issues.

Each year, that opportunity comes in the form of National Night Out, an event designed to develop relationships between community members and their respective protection and safety agencies.

“We have a small community -- it’s the one time each year we get everyone together, said Eric Baldino, who has hosted an event at his pre-1850 historic house with wife Kathleen for the last 15 years. “We interact a lot with the police because of the tunnel. This is our way of saying thanks.”

Baldino masterminded a large buffet for the affair, including barbecue ribs smoked for six hours prior to the event. His daughter Allison liked that firefighters from the Clifton station also joined the party, driving their ambulance and engine up the driveway. It also gave her a chance to “meet all the new people” in the neighborhood.

“It’s about making connections with the communities where we live and work in an environment where you don’t usually get to meet,” said Lt. Eli Cory, assistant commander of the West Springfield district police station. Cory has served as a Fairfax County officer for 17 years, but only recently joined the ranks at West Springfield.

“Often it’s when something bad happens -- you get pulled over, there’s a crime,” he said. “But to just talk over ice cream or a hot dog, you build these relationships. We get to know faces and names we can trust in communities.”

Across the Springfield district in Cardinal Estates, neighborhood watch captain Amanda Fox and family hosted a similar event to observe National Night Out. Traditionally theirs includes a movie for children screened in a neighborhood park, but this year rain canceled the show. The team was still satisfied with the turnout: an opportunity to meet with officers and share the message of being aware, safe and proactive.

“It’s great to get the community invested in preventing crime,” Fox said. “If you see something, say something. This gets people more involved, participating and making calls.”

“This is a critical part of why crime is so low,” Herrity said, “events like this, that get police, fire and sheriff’s departments out in the community.”

“Crimes don’t get solved without the help of our citizens,” he added. “They play an important role.”