Law enforcement and neighborhoods come together in Fairfax Station, Springfield and countywide. 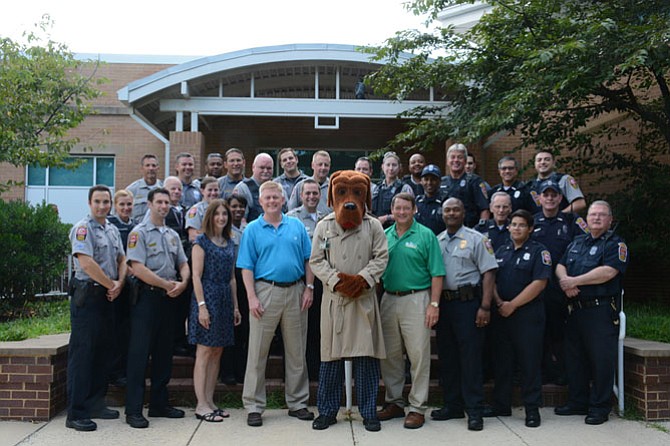 (Center, going right) Delegate Eileen Filler-Corn,D-41, Supervisor John Cook, R-Braddock, McGruff the Crime Dog and Supervisor Pat Herrity, R-Springfield, with officers in front of the West Springfield District Government Center before heading out for the 2016 National Night Out to interact with community members on Aug. 2. Photo by Tim Peterson.

Every night, that’s seven nights a week, Amanda Fox and her mother make rounds of the 169 houses in their community of Cardinal Estates in Springfield.

Fox is captain of the neighborhood watch. On National Night Out, however, she’s walking around handing out glow-sticks while neighborhood children, parents and police officers watch “Zootopia” on a giant inflatable screen.

First responders from Fairfax County Police, Fire and Rescue, the Sheriff’s Office, Virginia State Police and other first responders spent the night on Aug. 2 visiting special events being held in their communities.

The goal is to promote interaction, respect and trust between the various agencies and the people they’re sworn to protect. And to remind and help educate community members to be more vigilant and aware of their surroundings.

“It’s great to get the community actively involved, aware of crime,” Fox said. “We have dog-walkers, runners, people out and about. If you see something, call it in.”

Captain Gervais T. Reed is Commander of the West Springfield District Station for Fairfax County Police. He took over at the beginning of July, though he’s been with the department for 26 years.

Speaking at another National Night Out gathering in the Crosspointe neighborhood of Fairfax Station, he said the special event is the department’s “number one crime prevention effort.”

“It’s more eyes and ears out there,” he said in an interview.

Reed called National Night Out a “tremendous opportunity for the community to come out and show strong ties.”

“We get wonderful support in Fairfax,” he continued. “We’ve always had a really good relationship, we’ve never taken that for granted. In some communities it’s a challenge, but it’s not here.”

Gary Saturen, neighborhood watch coordinator for Crosspointe, is with the Community Emergency Response Team that put on the event in that neighborhood. It included demonstrations of first aid and CPR, and the Sheriff’s office creating safety identification cards for children.

Saturen said he really likes the chance for people to interact with the public safety infrastructure.

“They’re human beings like the rest of us,” he said. “They support us, we support them, everyone’s happier for it.”

Supervisor Pat Herrity,R-Springfield, toured half a dozen different events with Captain Reed. He’s been attending National Night Out events since he was elected in 2008. That community support “is part of what makes Fairfax County great,” he said. “We learn what issues are happening, crime and otherwise, and remind people they have a supervisor,” Herrity added. “We all get to hear what’s important for them.”