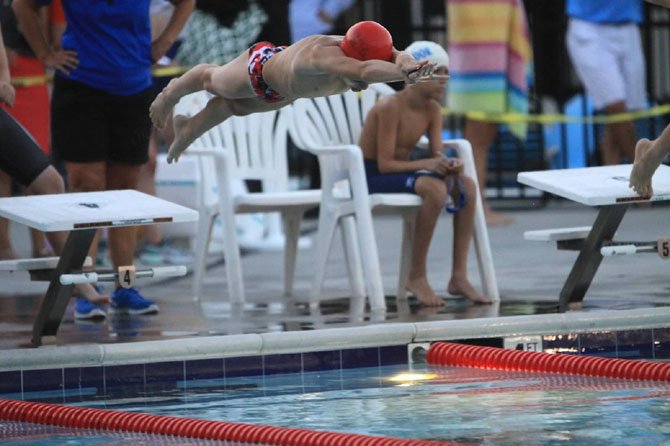 Jack Carman dives in for one of his two 1st-place finishes. Photo Contributed

The WGCC Lightning swimmers have just completed one of the most successful seasons in the team's history. They had an undefeated dual meet season, won Divisional Relays, and emerged victorious at the Division-A Championships. But, after losing by the absolute slimmest of margins at last year's league championships; the team was looking for redemption and the Lightning swimmers came through.

On July 28-29, the 15 teams of the Country Club Swimming and Diving Association met at Army-Navy Country Club in Arlington for the CCSDA league championships. Each team sent its top two swimmers to compete in each event. The preliminaries were held on Monday and the top16 finishers in each event returned on Tuesday for finals. While the other local swim leagues culminate in individual All Stars — the CCSDA "Champs" meet is ultimately a team event and determines the top team for the entire league.

After a 51-year drought, WGCC won Champs in 2009 and, over the past several years, the title has gone back-and-forth between WGCC and Kenwood. In last year's match-up, the Lightning lost by a half a point to their rivals Kenwood — the closest match-up in the league's history.

The Lightning's rallying cry this year has been "taking care of business." The team led the meet from the first event and they never looked back. Many of the swimmers posted season-best times — and a number of these times bested previous team and league records. By the meet's end, WGCC held more than a 100-point lead over the second place finishers.

Single winners for the Lightning were: Jillian Johnson (setting a new pool record of 1:11.83 in the Girls 12U IM); Lucas Zidlicky (setting a pool record of 15.46 in the Boys 8U free); Sean Curran (Boys 8U back); Sophie Yoder (Girls 10U back); Sydney-Cate Thornett (Girls 10U breast); and David DiMeglio and Richard Gentry (with a tie for first place in the Boys 14U breast).

The Lightning have had great success all season in the relay events and this meet was no different. Of the six relay events, WGCC won four of them and finished no lower than 3rd place out of all the teams. The Boys Junior Medley relay team of Z. Zidlicky, Ricks, Carman, L. Zidlicky won and set a new pool and team record, with a time of 1:03.91. The Boys Graduated 200-meter Free relay team of L. Zidlicky, Gerlach, Ricks, Z. Zidlicky and Baker set a new CCSDA, meet, pool, and team record of 1:49.00. The Girls Junior Medley Relay team of Johnson, Thornett, P. Nassetta, and Shay and the Boys Senior Medley Relay team of Baker, Gentry, P. McCarthy, and Gerlach also won their events. Although the Girls Graduated Free Relay team of Shay, A. Nassetta, Johnson, P. Nassetta and K. Nassetta were edged out in their event, their time of 1:59.44 broke a 37-year old WGCC team record.