Long-shuttered landmark at 100 King has storied past. 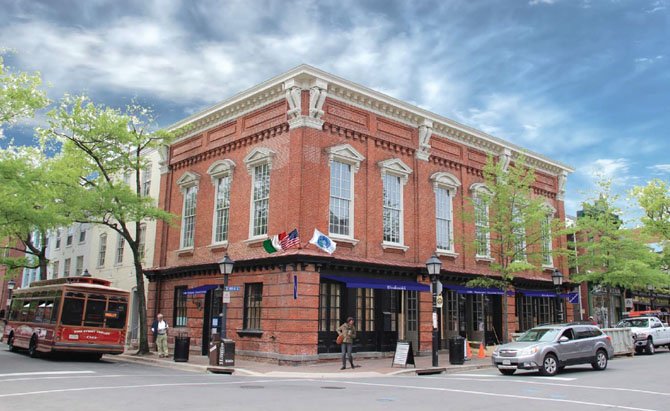 The jinx of 100 King St. dates back to the Corn Exchange, the ill-fated original purpose of the building. When grain merchants failed, the soaring 25-foot ceilings were used as retail space to sell groceries and feedstuffs. Ground-floor retail space was reserved for Diamond tires in the 1920s. Since that time, the building has business after business open and close. More recent years have seen the landmark building boarded up and seemingly abandoned. Now London-based Carluccio's is hoping to break the curse of 100 King, opening its first American location here in Old Town.

"They looked in Chicago and they looked in New York and they chose this building at the foot of King Street as the place where they wanted to build their American showcase and enter the U.S. market," said Stephanie Landrum, vice president of the Alexandria Economic Development Partnership.

The international chain started in 1999, when Italian chef Antonio Carluccio opened the first Carluccio's Caffe in London. Since that time the business has expanded to more than 70 locations across the United Kingdom. It’s also in Ireland and the Middle East. Renovations are now taking place at the building to transform it into the first American Carluccio's, relocating the front entrance from the center bay to the westernmost bay. That door will lead customers into a retail area that will sell high-end market selling olive oils and pastas and a counter selling sandwiches. A restaurant will be located upstairs, but will it encounter the traditional Corn Exchange misfortune?

"That's a good question," said David Tracz, architect on the project. "They are doing everything right, and they really understand their concept and they understand how to make if effective."

THE HISTORY of 100 King Street dates back to a time when Alexandria was still emerging from the dark days of military occupation during the Civil War. The commonwealth of Virginia had only rejoined the Union the year before the Corn and Produce Exchange approached architect Benjamin Franklin Price to construct an Italian Renaissance building in 1870. When it opened the next year on the site of an old federal customshouse, the Corn Exchange was located on the impressive second floor and Noble Lindsey opened a grocery store on the first floor.

"Unfortunately, the corn exchange failed," wrote Alexandria Historian Michael Miller. "Lindsey's business thrived, and by 1922 the Lindsey-Nicholson corporation was one of the premier enterprises in Alexandria."

The roaring 1920s brought automobiles to Old Town, which created a market for tires and inner tubes. Lindsey eventually went into business with Charles Nicholson, and the two created the Linsey-Nicholson Corporation. According to a contemporaneous account from the Alexandria Gazette in the 1920s, the business had six salesmen roaming Northern Virginia and Maryland. The location at 100 King was the flagship of the operation.

"It is the center of the wholesale district," the Alexandria Gazette reported in 1922. "It handles a complete line of staple and fancy groceries, notions, flour, feedstuffs, etc."

NOW 100 KING is about to be reborn again, this time returning to an earlier use as a retail outlet for high-end groceries. The gas carriage lamps will be removed. The market will offer a variety of Italian items, everything from fresh pasta and balsamic vinegar to prepared food. The historic granite steps will be sunk into the ground so the entrance will be fully accessible.

"Nothing will be removed from the site," said Tracz. "We're trying to make sure we are as conscious about historic preservation as we can."