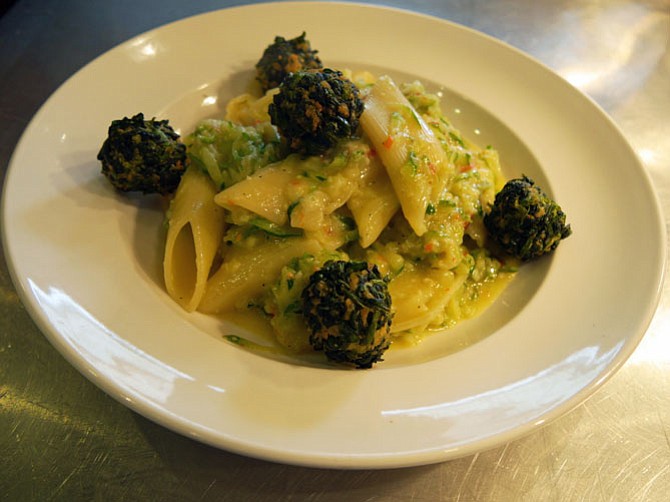 Alfio Celia finishes off his vegetarian special with five spinach meatballs. He says for every special they sell, Carluccio’s donates 50 cents to Action Against Hunger. Photo by Shirley Ruhe/Gazette Packet 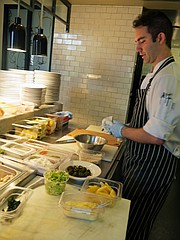 Alfio Celia, chef at Carluccio’s on King Street, lines up the ingredients for his vegetarian “meatball” pasta special made with spinach meatballs, shredded zucchini and penne regina.

Carluccio’s Chef Alfio Celia juggles an industrial stove full of boiling kettles, one for the eggs that will go in the Nicoise salad and one for the chicken that will be brined for the chicken salad. On the front right burner he is heating a skillet for the vegetarian special. Celia splashes a little olive oil into the pan, then a little chili oil, then some vegetable stock "very simple," just enough to coat the penne regina and make it creamy. Celia adds a handful of shredded zucchini to the skillet and shakes the pan, adding butter. Then three tablespoons (about one ounce) of grated Parmesan. Alfio says if you use more than six ingredients, it is too many. He says they have a purveyor out of Frederick that delivers all the produce fresh every morning at 6 a.m.

Celia says Italy is all about nice and fresh with very few ingredients. "It seems like here people like different combinations and tastes. When I first got here, it seemed like D.C. was a modern city and I love that passion. But," he continues, "I think we are coming back to comfort food. Here we are doing things that are authentic and traditional, not things that Americans think are Italian. Like for instance chicken parmesan. We would never serve pasta and meat in the same course or meat with cheese in Italy. Some things don't need to be changed. There is a reason we still cook like our grandmother — because it is good." Celia says he thinks that people are returning from the celebrity mindset with a lot of theater to comfort food.

“Egg please.” Alfio Celia breaks an egg into a dish to mix with spinach, grated Parmesan and a little nutmeg for his meatless meatballs. They will be flash fried in hot oil until just moist and a little chewy.

He mixes "meatballs" with fresh spinach and bread crumbs, a little egg and nutmeg and rolls them in his palms to about an ounce each. Then the spinach balls are lowered into the deep fryer to flash fry so they are just a little chewy and moist. He says “every time we sell this special we give 50 cents to Action Against Hunger.“ Behind Celia a chef trying out for a job is deep frying large cubes of eggplant for caponata. Another sous chef has chopped the peppers and onions for the penne giardiniera, "one of the most popular dishes. I hope I'm not being biased but my three-inch meatball appetizer recipe is also one of the favorites along with our lasagna." Celia adds that “Reggie over there makes 10 lasagnas a day. This one has five layers including a beef and pork ragu and a béchamel layer. Every region has its own authentic lasagna recipe and every grandmother a different way."

Mickey Asnicar stops into the kitchen. She is from Italy and director of U.S. marketing for Carluccio’s in Alexandria which is the first in this country, opened in May. She manages the Italian market downstairs in the restaurant. Asnicar says they import Italian products from all the regions of the country. The extra virgin olive oil and the fresh pasta sauces made in house like pesto and ragu are very popular, and she adds, "we offer the pasta we think would be perfect with the particular sauce so you can take it home."

Celia says they get olives directly and parma ham and prosciutto but they can't import salami or cured meats yet which are not legal because of the fat content.

Alfio Celia has added a little olive oil, a little chili oil and some vegetable stock to the skillet with the zucchini and penne regina, just enough to make it creamy.

Asnicar says, "this is refreshing, just like home or I wouldn't be working here."

Celia's father was from Italy but Celia was born in Ocean City where he started cooking in his dad's kitchen when he 14 years old, making pizzas and subs. "I grew up in the business but my father said never be a chef." But, "I remember every Sunday 30 or so relatives would come over to our house and spend hours eating. I thought about art, went to business school but ended up at La Academy Cuisine in Gaithersburg.” Along the way, Celia went to the UK and trained in eight of Carluccio’s stores there with 10-year veterans. He turns to answer a question,"no it should be dark tan, light brown." Celia says he tries to stay as interested as possible in everything happening in his kitchen where he has a team of 25 with every sous chef going through training. Smiling he says, ”I give all of my chefs expresso to keep them awake." He adds other restaurants kitchens are more of a hierarchy.

Carluccio’s has an Italian market on the bottom floor of the restaurant with products from all over Italy including extra virgin olive oil, parma ham, olives and cheeses as well as house made pasta sauces.

Right now he can get most of the ingredients he needs and has just added an octopus salad to the market. "I will start with my fall specials this week so I can have them picture perfect and ready to go for the fall season. He says he will try a chilled butternut squash soup and a pumpkin cannelloni. "I'm going to work on the menu right now. I'll be adding more stews, a beef and red wine." He will see what customers want. "And this morning I heard what I like. Two customers came into the market early for coffee and said 'I want the usual'."