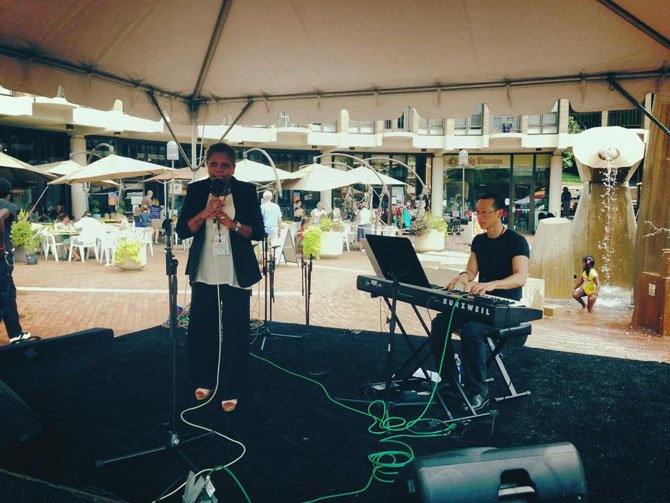 Lake Anne’s Jazz and Blues festival has grown a lot since it started eight years ago.

“We always try to focus on artists in the region,” said event organizer Eve Thompson. “We try to highlight really high quality musicians from the D.C. region.”

Every year, more and more people show up to listen to the music. In the last few years, anywhere from 800 to 1,000 stopped by to enjoy the festival, said Thompson.

The man behind the idea of the festival is Mykle Lyons, a local jazz musician. He said Thompson approached him looking for possible festival ideas to bring more people to Lake Anne Plaza. The Jazz and Blues festival became the plaza’s first festival.

“Being a jazz musician, I had this whole idea for a jazz festival,” he said.

In part, he wanted to make money for a profession he has been pursuing for 30 years. However, he also wanted to raise awareness about jazz and show residents it does not have to be stuffy - it can also be fun to listen to.

“And a venue like Lake Anne is perfect for a jazz festival,” he said. “In the community, a lot more people have been coming out to listen to the music. Year after year, the crowd gets larger.”

Two of the musicians, including Lyons, are from Reston. The headliner, The Adrian Duke Project, will play at 7 p.m.

The plaza will transform into a beer and wine garden for visitors to enjoy while they listen to music. Also, for the second time, Initiative for Public Art - Reston will install an interactive art piece on the festival grounds. This year, they will have a chalkboard where visitors could write down a wish for their bucket list.

For Thompson, the festival is a part of Lake Anne’s revitalization. The festivals are all funded by the profit from the farmers market held on Saturdays through the summer. Any additional money needed comes from sponsors throughout the community. She said Reston Community Center is the largest contributor for the plaza’s festivals.

“Before we knew it was going to get a revitalization, we said we would take charge of our own destiny,” she said. “It’s just about creating awareness that the village center is a beautiful place to be.”

The Reston Jazz and Blues Festival, a free event, will be held from 2 to 8 p.m. on Aug. 30 in the Lake Anne Village Center.