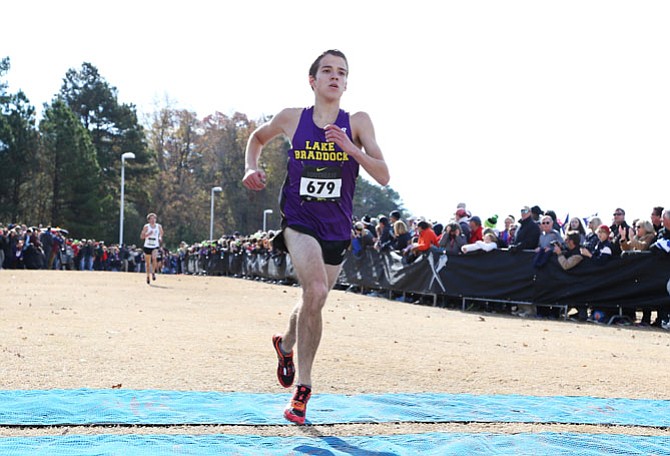 Senior Alex Corbett and sophomore Kate Murphy each placed fifth in their respective races at the Nike Southeast regional meet on Nov. 29 in Cary, N.C., qualifying the duo for the national meet, which will be held Saturday, Dec. 6 in Portland, Ore.

The top two teams and the top five unattached individuals qualified for nationals.

“He ran great,” Lake Braddock head coach Mike Mangan said. “He did exactly what he was supposed to do.”

Murphy finished fifth in the girls’ race, recording a time of 17:31.6.

“I felt I performed well, but I think if I had had a better start, it would’ve helped me move up a lot quicker in the race,” Murphy wrote in an email. “During the middle of the race, I got myself toward the front, but I think I got there a little too late.”

“She ran a great race --- [her] best race to date,” he said. “[She’s] only a sophomore [and is] probably going to be one of the best we’ll ever have at Lake Braddock.”

Mangan said Corbett and Murphy followed the race plan of being patient. Each was between 15th and 20th near the halfway point of their respective races, according to Mangan.

“For both the girls and the boys, we’re not a team that goes out super hard at the beginning of the race,” Mangan said. “We’re patient. … Both of them just kept moving forward as the race went on.”

In the team competitions, Lake Braddock finished third in the boys’ and girls’ races, falling just short national bids. The boys’ team missed a trip to nationals by one point.

Severna Park (Md.) won the boys’ team competition with a score of 141 and Daniel Boone (Tenn.) finished runner-up with a total of 158.

Lake Braddock finished with a score of 159 and would have had the tiebreaker against Daniel Boone due to a superior time turned in by the Bruins’ No. 6 finisher.

“Had we been able to find that one point, the boys would be on their way to Portland,” Mangan said. “… [It is] absolutely brutal for the kids. They worked so hard. I really think they deserved one of the at-large bids.”

The Lake Braddock boys’ cross country team placed third at the Nike Southeast regional meet on Nov. 29 in Cary, N.C., missing a trip to nationals by one point.

West Springfield finished 12th with a score of 364.

Daniel Boone senior Adam Barnard won the individual title with a time of 14:44.

The Bruins celebrated Thanksgiving in the afternoon before taking off for North Carolina.

“The experience was great,” Murphy wrote. “Every opportunity my team and I get, I try to make the most of it and take in everything --- to learn from it! Although our boys’ team lost by one point, I was still so proud of them because they gave it their all and performed really well. It was amazing experiencing our girls’ third-place [finish] because we are a young team and didn’t expect to place as high as we did.”

The Lake Braddock boys' team captured the VHSL 6A state championship on Nov. 15 at Great Meadow. Corbett and Monogue led the way for the Bruins, finishing first and second, respectively. The team also won Conference 7 and 6A North region titles during the season.