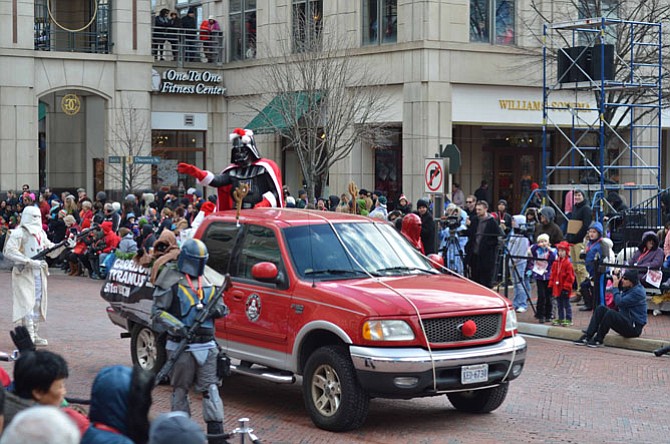 Darth Vader made an appearance with members of the 501st Legion at the Reston Holiday Parade. The Legion is an all-volunteer organization formed for the purpose of bringing together costume enthusiasts under a collective identity within which to operate. Photo by Ryan Dunn.

In the 2014 Reston Holiday Parade was Walker the Woodpecker, the new mascot for Reston. This year, the Pileated Woodpecker received the most votes to be named the official Bird of Reston.

Reston Town Center hosted the 24th Annual Reston Holiday Parade, a signature Reston event, on Friday, Nov. 28. Beginning at 11 a.m. the parade along Market Street launched the festive season. Since 1991 the Reston Holiday Parade has been an annual tradition on the day after Thanksgiving, rain or shine, at Reston Town Center, 11900 Market Street, Reston.

The day’s events kicked off with Potomac River Running Store's Gingerbread Man Mile run. NBC4 reporter Angie Goff, an alumna of Herndon High, was the guest emcee of the parade and introduced the many participants. The Reston Holiday Parade featured Macy’s-style balloons, musicians, dancers, antique cars, characters, community groups, and local dignitaries. Before the 11 a.m. parade began, thousands of US flags and jingle bells were handed out to spectators lining the route. 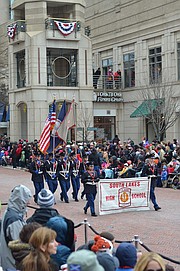 South Lakes High School had many participants in the 2014 Reston Holiday Parade including members of the South Lakes HS Army JROTC Seahawk Battalion.

CELEBRATING “Home for the Holidays” this year, the parade had an Americana theme, offering a welcome to members of the military and their families. In this year’s parade were the Washington Nationals Racing Presidents. Many of the participants were from local organizations and committees located in Reston and Herndon. In the parade were members of the Herndon High Step Team and the drum line and color guard for the Herndon High marching band.

Reston South Lakes High School was represented with members of the South Lakes marching band, the Sprit of Reston, and South Lakes HS Army JROTC Seahawk Battalion. “This is my third time participating in this parade,” said Gloria Ventura, a junior at South Lakes HS and member of the JROTC program. “We practiced very hard for this event.” Residents from Reston and surrounding communities went to Reston Town Center to attend the event.

This year’s Grand Marshal was Air Force Lieutenant Colonel Kris Cowart, his wife Nicole, and daughter Lizzie. Colonel Cowart serves in Washington, D.C. The Junior Grand Marshal was South Lakes High School student Nathan Rulona, the Battalion Commander of the JROTC program, who leads 151 students while maintaining a GPA of over 4.0 in the IB diploma program.

“We enjoyed seeing the trucks and the Frosty snowman balloon float,” said Reston resident Kara McElveen, who attended the parade for the first time with her husband and family members. Participants in this parade included US Rep. Gerald E. “Gerry” Connolly (D-11), Fairfax Sheriff Stacey A. Kincaid, and Hunter Mill District Supervisor Cathy Hudgins. Walking in the parade with other members of the Reston Association was board president Ken Knueven. “Every year I'm honored and blessed to be a part of such a spectacular event,” said Knueven. “The people, the groups, the organizations all give so much to make this a fun, fun day for the Reston community.” Also in the parade was Walker the Woodpecker, the new mascot for Reston. This year, the Pileated Woodpecker received the most votes to be named the official Bird of Reston.

Darth Vader made two appearances in the parade, one while driving a sporty coupe, and another with members of the 501st Legion. The Legion is an all-volunteer organization formed for the purpose of bringing together costume enthusiasts under a collective identity within which to operate. The parade closed with the arrival of Santa and Mrs. Claus in a horse drawn carriage.

AFTER THE PARADE, Santa and Mrs. Claus stayed for visits and photos until 4:30 p.m. and returned in the evening to light up the huge Christmas tree at 6 p.m. The Reston Holiday Parade is supported by balloon sponsors including Reston Community Center, Reston Town Center Association, and The Wise Investor Group.

Hundreds of volunteers assist in making the community event a success. The parade was a visual treat for the entire community. “This is our fifth year attending, it is such a great parade,” said Vienna resident Catherine Campbell, who brought her son and family members to the event. Holiday related events will continue at Reston Town Center, with horse drawn carriage rides offered on Saturdays in December from 4 to 9 p.m.