The Sights and Sounds of Reston Holidays
Votes

The Sights and Sounds of Reston Holidays

Festivities at Reston Town Center continue throughout the season. 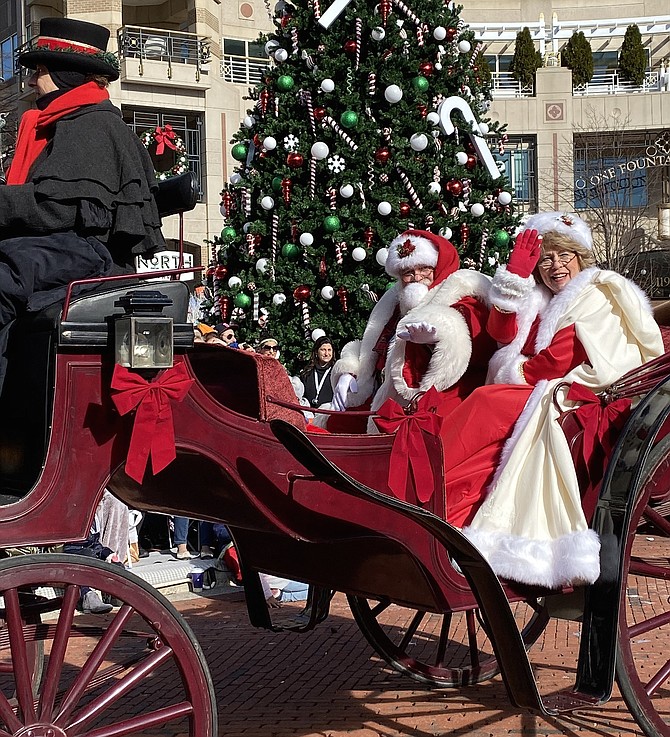 A jolly Santa Claus and Mrs. Claus arrive from the North Pole to Reston. Photo by Mercia Hobson. 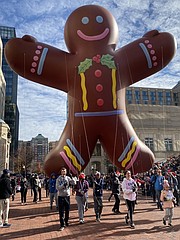 The Gingerbread Man Balloon makes its way down Market Street in Reston. 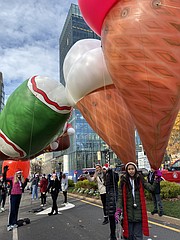 "I'm a volunteer balloon handler with three years experience and I'm only 13," said Lyla Emmatty of Herndon, as she handled the balloon with other Herndon Middle School students and parents.

A cheer goes up for Christal Rheams and Caleb Green, the 2019 Grand Marshals of the Reston Holiday Parade. They represent "Voices of Service!" and are in the singing quartet from the Center for American Military Music Opportunities. 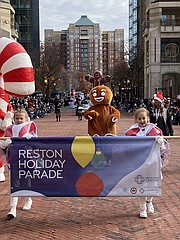 The 2019 Reston Holiday Parade begins with the official Parade Banner and Characters making their way down Market Street in Reston. 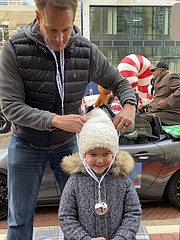 Tripp Lowe of Shepherdstown, W.Va. places a jingle bell around the neck of his daughter, Cameron, 4, at the 2019 Reston Holiday Parade. "This event is exceptional and important to the community. It is about giving back, and in some aspects of life, this is forgotten.” He and his wife, Nicole then sat down to watch the parade. 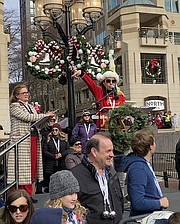 "The 2019 Reston Holiday Parade proved as always to be the best way to spend Black Friday," said Angie Goff, this year's parade emcee and News Anchor at FOX 5 – WTTG Washington. "Having a good time outside, getting into the holiday spirit, along with dining with friends and getting some shopping done," she said.

THE RESTON TOWN CENTER elves kicked off the parade carrying the Reston Holiday Parade banner accompanied by mascot dog RESTY. Next, bagpipers representing the MacMillan United Pipe Bands performed under the leadership of Pipe Major Andrew Donlon, Pipe Sergeant Tom Cangelosi, and Drum Sergeant Alexander Kuldell. The crowd gave a big cheer to Christal Rheams and Caleb Green, the 2019 Grand Marshalls of the Reston Holiday Parade, members of 'Voices of Service! "You may have seen the outstanding "Voices of Service!" competing on America's Got Talent. Simon Cowell was floored by their performance," said Goff.

The parade rolled for the next hour, choreographed like a New York Macy's Day Parade, only better. "It's a great parade...but I want to keep it a secret. It's a mini Macy's, but more personal. It's our community," said Kathy Marten of Reston. "This is my family," she said, pointing to a large gathering of children and adults.

A few moments later, the first parade balloon floated along Market Street. "Here is a giant Gingerbread Man that is always a big hit. He is a whopping twenty-eight feet tall and is brought to us by Reston Town Center Association," said Goff.

Reston Youth Cheer showed off their "stuff," with a performance in front of the VIP bleachers, according to Goff. "With a mission of training young athletes in all aspects of cheerleading, stunts, jumps, tumbling, and dance, Reston Youth Cheer is part of the Reston Youth Association. It is Reston's only recreational cheerleading program with enrollment from kindergarten through eighth grade," she said.

Cub Scout Packs 32 and 1160, as well as Boy Scout Troop 1137 followed, with South Lakes High School Army JROTC closing in fast. "The Seahawk Battalion here today is an "Honor Unit with Distinction," signifying that it is one of the best JROTC programs in the country," said Goff as the crowd gave them a welcoming cheer.

"This is another wonderful Reston Holiday Parade tradition, the beautiful and talented Conservatory Ballet," said Goff. "Founded in 1972, the Conservatory Ballet has become the premier dance academy in the Washington D.C. area. The Conservatory's students learn to embody the three E's – Excellence, Experience and Earnestness – under the watchful eye of a trained and caring faculty. Making holiday magic come to life, they'll now perform for us on Market Street," said Goff.

FRIENDS OF RESTON, celebrating their twentieth anniversary and the tenth anniversary of their flagship project: Nature House at the Walker Nature Center brought along mascots, Earl the Squirrel and Walker the Woodpecker. Girl Scouts from Troop 51067 joined them.

A few participants later, #47 appeared, the giant Christmas Stocking. "This is twenty-five feet of stocking filled with nine-hundred cubic feet of helium...If toys and treats are here, that means our guest of honor must be on his way. Get those jingle bells ringing," Goff said, who next welcomed the Spirit of Reston, the South Lakes HS Marching Band under the direction of Grayson Fore. "The Spirit of Reston is a Virginia Honor Band and has won numerous awards. This year they will travel to the National Concert Band Festival in Indianapolis as one of sixteen bands selected from across the United States," said Goff. "Spirit of Reston has performed at Carnegie Hall, the Kennedy Center and the Virginia Music Educators Conference."

Nearly one hour after the parade started, friends and characters, Restonians and visitors, jingled 10,000 bells and called out, Santa, Santa. "Let's make some more noise and welcome the jolly couple from the North Pole to Reston.

“Ho, ho, ho, Santa and Mrs. Claus. Thank you, everyone, for being here today. We've had an amazing twenty-nine years because of our residents, tenants and visitors like you. Happy holidays, and enjoy shopping, dining and having fun at Reston Town Center," said Goff.

Before the parade started, Goff thanked the more than 200 volunteers who made the event happen, including Mazda and Brown's Dulles Jeep for transportation of the VIPs in the parade. She highlighted parade sponsors: Community Partner, Reston Community Center for the Macy's style balloons and Reston Town Center Association. "Thank you to our wonderful host, Reston Town Center, and all of the team at Boston Properties Reston Town Center for bringing this celebration to Reston once again and presenting the twenty-ninth annual Reston Holiday Parade. Today we're bringing in a 'Candy Lane at Reston Town Center' with the parade, and 'Holidays are Here' all through the season," Goff said.

Celebrate the holidays at Reston Town Center. Festivities continue throughout the season. Visit www.restontowncenter.com for more information about the horse-drawn carriage rides and mini-train rides.