Lighting the menorah at Potomac Place. 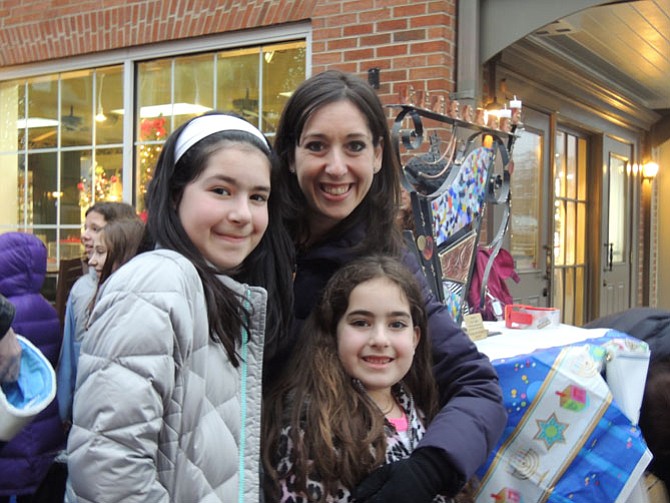 Melissa Levine with daughters Lexie and Sloan at the Menorah candlelighting in Potomac Village.

On Tuesday, Dec. 16, the first night of Hanukkah, the lighting of the candle of a large menorah, singing, and the giving of gelt welcomed in the Jewish holiday. Rabbi Stuart Weinblatt, Cantor Marshall Kapell and members of the Congregation B’Nai Tzedek led the ceremony in the courtyard of the Potomac Place Shopping Center. Afterwards, the synagogue members again participated in a candlelighting ceremony outside Nordstrom’s at Westfield’s Montgomery Mall.

The Potomac Place ceremony featured many festive Hanukkah songs such as Hanukkah O’ Hanukkah S’vivon Sov Sov, Chanukah Chag Yafe,and the Latin American Ocho Kandelikas, which means Eight Candles. Songsheets were distributed as the more than 50 members joined voices to sing the traditional songs. They were accompanied and led by Kapell who played the guitar.

“Usually many people from the community who are passing by on their way to shops or restaurants stop by and join in,” said Amanda Katz, assistant executive director of Congregation B’nai Tzedek. “We are pleased to let the people of Potomac know that we are right here in Potomac, just off South Glen Road, and give them information on some of the activities that we are involved in.”

Melissa Levine attended with her daughters Lexie and Sloane. “It’s so important for kids to feel confident about being Jewish and comfortable displaying the Jewish religion in public. There were never public lightings when I was a child, and now they have the Menorah lighting tonight on the Mall and so many other lightings, both in Bethesda and at the Westfield Mall,” said Levine.

Everyone at the ceremony was in celebratory spirit, particularly Weinblatt who was dressed as a dreidel. He said, “We are celebrating the first night of Hanukkah with the lighting of the first two candles of the Menorah. It is customary to light this taller additional light aside from the Chanukah lights. This extra light, referred to as the shamash, may be used to light the Hanukkah lights and we all derive benefit from its light. We say thank you to God for the miracle of our ancestors and our heritage.”

Hanukkah, the eight-day festival of light, celebrates the triumph of light over darkness, of purity over adulteration, of spirituality over materiality. At the heart of the festival is the nightly menorah (candelabrum) lighting: a single flame on the first night, two on the second evening, and so on till the eighth night of Hanukkah, when all eight lights are kindled.

This is the second year that the ceremony at Westfield’s Montgomery Mall, called “Hanukkah Night Lights,” has taken place to welcome in Hanukkah. The event is co-sponsored by the PJ Library along with The Jewish Federation of Greater Washington, the Charles E. Smith Jewish Day School, Congregation Beth El of Montgomery County, Congregation B’nai Tzedek, Jconnect, the Jewish Food Experience, the Jewish Social Service Agency, Magen David Sephardic Synagogue and Temple Beth Ami.

PJ Library provides families raising Jewish children from 6 months to 8 years old with a free treasury of high-quality, expertly-selected and child-tested Jewish books and music each month. PJ Library in Greater Washington is a gift from The Jewish Federation of Greater Washington, the United Jewish Endowment Fund, the Howard and Geraldine Polinger Family Foundation and the Perlin Family Foundation.

Sarah Rabin Spira, community outreach associate, said, “We send out free Jewish songs and books by email. This is a community-friendly program and there are absolutely no strings attached. We send to 4,400 families in our metropolitan area and nationwide to 120,000 families and growing. Sign up on-line at www.Jconnect.org/pjlibrary.

To learn more about Congregation B’nai Tzedek go to its website at www.bnaitzedek.org or call 301-299-0225. The synagogue is located at 10621 South Glen Road in Potomac.