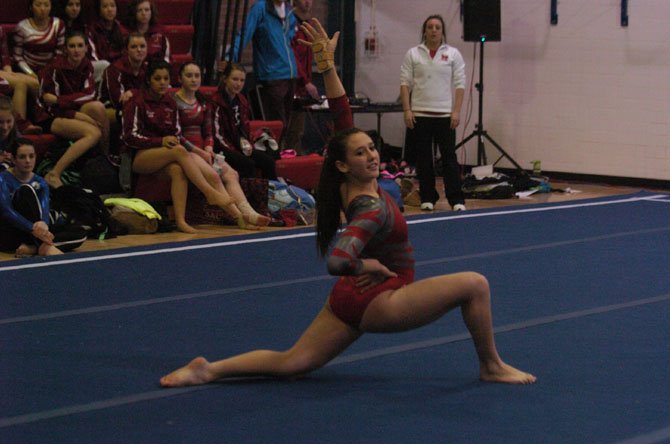 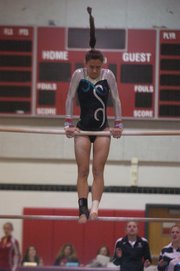 After the conclusion of the Conference 6 gymnastics championship meet, Washington-Lee head coach Joe D’Emidio wrapped up an interview with a reporter as McLean coach Courtney Lesson approached.

“I want to say congratulations to McLean,” D’Emidio said. “They’ve been going after us for a couple years.”

After finishing runner-up to Washington-Lee at regionals each of the last two seasons, McLean finally finished ahead of the Generals with a championship on the line as the Highlanders captured the Conference 6 title on Monday night at McLean High School.

McLean finished with a score of 144.475, besting second-place Washington-Lee’s total of 140.925. Each team earned a berth in the 6A North region meet on Feb. 12 at Lake Braddock Secondary School.

“They always have a really great team,” Lesson said, “so it’s hard to compete against them.”

The Highlanders put on a strong performance on Feb. 3, led by junior Lizzy Brown-Kaiser, who placed second in the all-around. McLean posted the top team score in three of four events and finished second behind Washington-Lee on vault.

“We’ve never performed this well before,” Brown-Kaiser said. “This was definitely our best. We didn’t count a single fall for the entire competition. That’s a huge deal. Definitely a confidence booster and we’re all just so happy.”

“She did a great job,” Lesson said. “She’s really a team leader and she inspires a lot of the girls.”

“I think we all really appreciate W-L as a strong competitor, but it feels really good to finally move past that and do what we’ve been striving for for several years,” Brown-Kaiser said. “… This was definitely the best meet I’ve ever had. … The girl who got first, Rachel, is an amazing gymnast, so I’m just glad that I even got so close to her.”

Brown-Kaiser wasn’t the only Highlander performing at a high level.

“I think we all really appreciate W-L as a strong competitor, but it feels really good to finally move past that and do what we’ve been striving for for several years.”

“They did really well,” Lesson said about the Highlanders’ performance. “They hit lots of routines. Everyone stuck their beam routine. They did really great. The team spirit was there. They had each other’s backs.”

Two weeks prior, D’Emidio said Annie Hatcher was a potential state-title contender on vault after the senior won at the W-L Invitational.

“She’s right up there,” D’Emidio said Monday. “She’s coming along really well. … She took first on vault. This is one of the hardest conferences … so she has a good chance.” 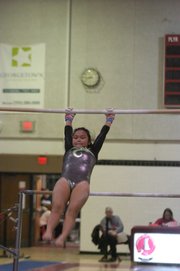 “We broke the 140 mark. We’ve been trying to hit that all year,” D’Emidio said. “We did it at the right time. … We did fantastic vaulting. We still have some more room to improve for regions and we’re going to shoot for [the region title].”

South Lakes’ Jasmine Shuey finished first on beam with a score of 9.55. The senior finished ninth in the all-around (34.075), including a third-place performance on floor (9.2).