Councilman Stombres Not Seeking Another Term

Time for ‘new energy and a fresh perspective.’ 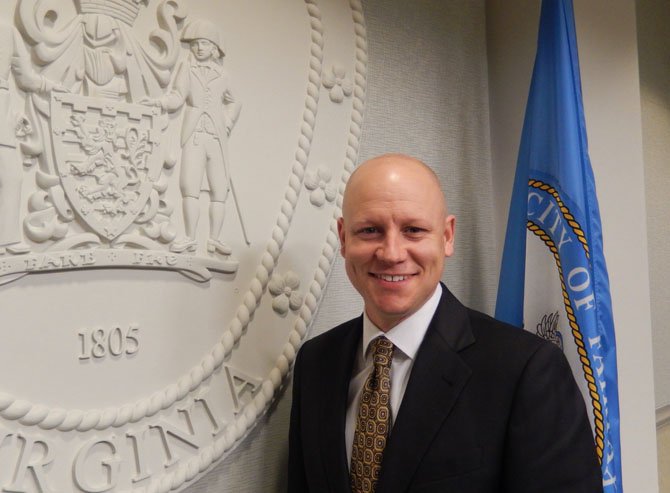 Councilman Steven Stombres stands by the City of Fairfax seal and flag. Photo by Bonnie Hobbs.

While enjoying his time as a member of the Fairfax City Council, Steven Stombres will not be running for re-election. He made the announcement last Tuesday, Jan. 28, during the Council’s regular meeting.

"I have been incredibly honored to serve on the City Council for the past six years, but I wanted to let the community know tonight that I do not intend to run for another term," he said.

Stombres said it’s been an "amazing experience" but, after spending a great deal of time "contemplating the ever-increasing time requirements of my full-time job, the busy schedule of the upcoming budget deliberations here in the City, and the demands of a spirited campaign season, I do not believe that I can continue to dedicate the time and effort necessary to do the job."

WHEN HE’S NOT WEARING his Councilman hat, he works on Capitol Hill as the chief of staff for the office of the majority leader of the U.S. House of Representatives. And that position takes up so much of his time, said Stombres, that City residents "deserve more from their Council members" than he can offer at this point in his career. But he noted how proud he is of the many things they’ve accomplished together over the years and how pleased he was "to play a small part in the success we have all enjoyed."

"We continue to have the lowest, overall tax burden of any jurisdiction in the region," said Stombres. "And the money that we do ask residents and businesses to invest in the City is well spent in the form of first-class services, award-winning parks and recreation activities, great schools, heroic first responders and public-safety officers, an incredibly dedicated City staff, and a well-run, financially sound, local government."

Since he and fellow Councilmen Dan Drummond and David Meyer were first elected in 2008, he said, the City of Fairfax has been named by Forbes Magazine as the third best place to live in America. "Although I believe we’re number one," said Stombres.

"We achieved a triple A bond rating, we created the environmental sustainability committee [and] we won a gold medal from the National Recreation and Parks Association," he continued. "We were certified as a Green Government by the Virginia Municipal League, we conducted a money-saving energy audit and we increased our recycling rate from 37 percent in 2005 to almost 58 percent today."

Stombres also stressed that the City has made some critical decisions recently, including "dealing with our aging water system. But looking ahead, there are some important and consequential issues on the horizon that we are just beginning to consider. It seems that now is an appropriate time to step down from the Council."

He recalled that, when he ran for his first term, he said it was time for some "new energy" on the City Council. "After the upcoming election, I am confident that we will continue to have experienced hands representing the City, but I still believe in a citizen Council," said Stombres. "I have seen first-hand how a new face on the dais can bring new energy and a fresh perspective that can be invigorating to the Council, the City staff, and the community as a whole."

He said he’s grateful to many people and will tell them all eventually. But in the meantime, he specifically thanked Mayor Scott Silverthorne and past Mayor Rob Lederer "for their leadership and guidance throughout my time on the Council. I have thoroughly enjoyed serving side-by-side with Gary Rasmussen, Joan Cross, Jeff Greenfield, David Meyer, Dan Drummond, Ellie Schmidt, and Michael DeMarco. They are all amazing public servants."

Stombres also acknowledged his gratitude toward Page Johnson, Steve Moloney, Janice Miller and Beverly Myers – "all of whom play such an important role in the daily life of our community. I am also grateful to the citizens who stay involved in the affairs of the City and volunteer their time and talents to our community."

Furthermore, he said, "I would be remiss if I didn’t thank Bob Sisson, Dave Hodgkins, Melanie Burrell, Brian Lubkeman, David Summers, Brooke Hardin, Mike McCarty, Chief Rappaport, Chief Rohr, Wendy Sanford, Chris Martin, Nicole Hange and the entire staff here at City Hall. None of the things that we all take credit for would be possible without their work behind the scenes."

LASTLY, Stombres thanked his "wonderful wife Kristen and my three children, Katie, Ellie and Jimmy for all of their love and support and for sharing me with the community. None of the things I have done or tried to do would have been possible without them."

Prior to the Council meeting, he’d discussed his decision with Silverthorne. And after he finished speaking, the mayor told him, "You’ve been a joy to work with. You’re smart, funny and fun."

Then, addressing the whole Council and the audience, Silverthorne said, "I did my best to try to talk him out of this. I respect that it’s in the best interests of his career and family, but it’s bittersweet. In my 20 years with the City, this is the best council I’ve worked with. I wish you the best and thank you very much for your service."